The photos and sketches included in the previous posts suggest that the building with the cupola stood on what is now the 1200 block of Princess Anne Street. The prewar tax records don’t indicate any substantial improvements on that block. The local newspapers, however, seem to hold the answer.

In the August 11, 1860 edition of the Weekly Advertiser, the following notice appeared:

Wm. H. Norton, Esq., is taxing his ingenuity and trying his best on that magnificent thirty thousand dollar domicile of Douglas H. Gordon, Esq’s, which is to surpass anything in the way of private residences ever seen in our hitherto “finished town.”

(William H. Norton was an accomplished Fredericksburg carpenter and builder.)

A month later, in the September 6, 1860 edition of the Advertiser, this announcement is found:

We also understand, there are several parties about commencing houses – this with Mr. Gordon’s and several other buildings nearly completed, shows an activity and prosperity that we have not had here for many years in that department.

We know that the Douglas H. Gordon House, which still stands at the corner of Princess Anne and Fauquier Streets, was built sometime prior to 1801. These mentions in the newspaper indicate a second residence being built by Mr. Gordon that must have been a substantial structure.

In April 1867, Douglas Gordon sold lots 97 and 98 to Leonard C. Frost. In the November 1, 1869 edition of the Virginia Herald, the following advertisement is found:

Since we know the Gordon House was, and, is a two-story frame structure, this advertisement suggests a larger, more substantial house also owned by Frost.

In 1869, Frost subdivided his two lots, selling the northern half and the older Gordon House, to Reverend Thomas S. Dunaway, pastor of the nearby Fredericksburg Baptist Church. On the morning of September 12, 1871, a fire destroyed a large building on Frost’s property. This from the report of the fire that appeared in the September 14, 1871 edition of the Virginia Herald:

About two o’clock last Tuesday morning an alarm of fire was raised, when it was discovered that the handsome brick residence of Mr. L.C. Frost, on Princess Anne street, was on fire, which consumed the whole wood work of one of the most costly residences in the city, leaving nothing standing except the naked walls.

The property destroyed was built by Douglas Gordon, before the war, but who did not quite complete it, when it was subsequently purchased by Mr. Frost, who expended about five thousand dollars in completing it and making other improvements.

The handsome frame dwelling of Rev. T.S. Dunaway, which was only some twelve or fifteen feet from the burnt building was, from the first to last, in great danger of being destroyed but indomitable courage conquered.

So, it seems that there was a large residence on the 1200 block of Princess Anne Street that was started by Douglas Gordon in 1860, finished by Leonard Frost and subsequently destroyed by fire in 1871. A look at the tax records shows a jump in value of buildings on Lots 97 and 98 from $4,500 in 1867 to $13,500 in 1868. This suggests the completion of the residence started by Gordon. I’m not well-versed in how property taxes were determined, but might it be possible that we don’t see Gordon being taxed for this new residence because it was not a finished structure?

Below is a current photo of the 1200 block of Princess Anne Street, looking northwest. Today the block only contains three addresses, the Thomas Knox House (aka Kenmore Inn) at 1200 Princess Anne, a 1928 Dutch Colonial at 1204 Princess Anne, and the Douglas Gordon House at 1210 Princess Anne. 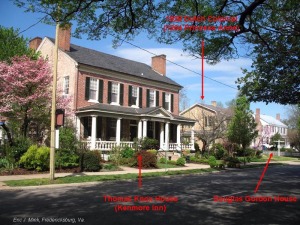 There is a fair amount of space between the Gordon House and the 20th century Dutch Colonial. Certainly this space is large enough to have accommodated the large brick Gordon-Frost House.

Even along the sidewalk today, we may see the evidence of this structure. Are the stone wall, steps and gate that front Princess Anne Street, south of the frame Gordon House, surviving landscape features that complemented the structure finished by Leonard Frost? Was this the access from the street to the brick Gordon-Frost House? 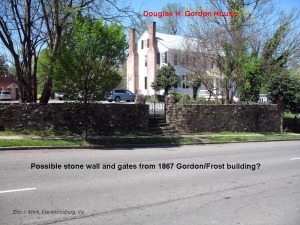 If we accept that the large building with the cupola that appears in so many wartime photos and sketches stood on the 1200 block of Princess Anne Street, and that it stood on Douglas Gordon’s land, than the structure mentioned and described above is the likely candidate.