From Hennessy:  Unlike most governments, whose planning horizons can’t extend too far beyond the next election, planning and management of an NPS site has to look forward decades, even centuries. These places are, after all, supposed to be as vivid and meaningful to Americans in 1,000 years as they are today.  At the same time, battlefields have become a setting where Americans across generations have expressed themselves toward their past.  The veterans were most ardent about this, of course, but later generations have also found need to leave a mark in the form of monuments–from the Centennial to as recent as last May, when South Carolina dedicated a monument near the Bloody Angle.  In the last fifteen years, the NPS as a whole has recognized the long-term implications of a continuous accumulation of memorial expressions and has put in place a very tough process for getting a monument in a National Park approved. Rightly so.

But we are left still with an even more numerous form of expression:  interpretive exhibits and signs.  At Fredericksburg and Spotsylvania NMP we do not have the old War Department markers that are so common at Gettysburg, Antietam, and other  battlefield parks created before 1933, but we do have a fondly regarded layer of interpretation dating from the 1950s: the Happel signs, mentioned by Craig Swain in his post of yesterday.  These are cast aluminum, text-only signs (a few later attempts at imitation include some simple graphics) intended to be read from your vehicle, planned and written by long-time staff historian Ralph Happel.  Here’s an example of a set on Grant Drive at Spotsylvania. 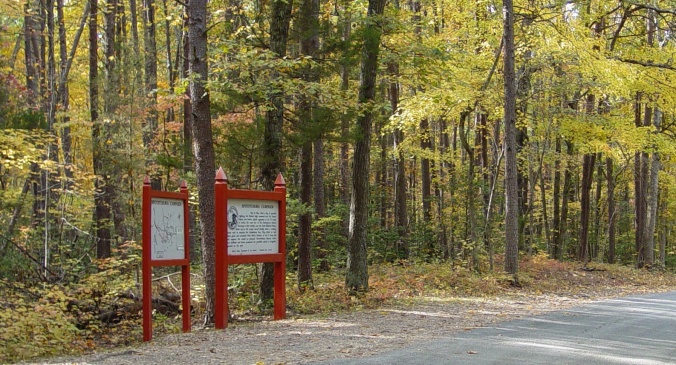 Like many, this set of signs includes a companion cast-aluminum map, also from the 1950s.  These signs are beautifully written, generally accurate, and their distinctive form has become closely identified with the park.  Some local developers have even copied the style, and a few grace local subdivisions.

But, they are upright and huge.  They were designed in a different age, when the intent was for visitors to tour the park in their cars, without much footwork on the ground (though over time they were often put in places only accessible to pedestrians).  And the maps that accompany them are invariably badly out of date. As an added joy, they need to be hand-painted every few years.

The park is in the process of installing new wayside exhibits throughout the park; indeed, Spotsylvania is the final component of that project.  Our wayside project stimulated an interesting, sometimes intense discussion about the future of the Happel signs.  Some staff members wanted them to remain, feeling them to be an integral part of the park’s identity and landscape–that our new exhibits should work around them.  Others in the NPS and public have argued that we should preserve them as historic–as manifestations of the park’s evolving approach to onsite interpretation over the decades.  Others among the staff and public were ambivalent (not necessarily disinterested).  I had strong views in the other direction.  Our ultimate solution:  we are keeping the Happel signs at sites that are “drive-by”–that is, at sites that we cannot have or don’t necessarily wish to have visitors get out of their cars.  Several, for example, will remain along Jackson Trail.  But where we want visitors to be on the site, we are removing them.

Here is an example of what’s going in throughout the park: 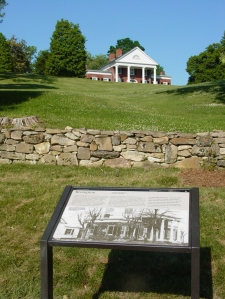 Why that decision?  [By way of background, please note that the Happel signs are NOT considered contributing resources in the park’s new National Register documentation).

Setting aside the positive virtues of modern waysides (vivid graphics, useful maps, low visual profile, changeability over time) to focus on the issue of retaining and preserving the Happel signs:  while I certainly understand and embrace the need to preserve commemorative expressions placed on the landscape by veterans and subsequent generations (though I do believe it should be VERY difficult to have a new monument approved for a national park), I am generally opposed to the preservation in-situ of the government’s own efforts to interpret these sites to the public.  Not only do these ancient forms of media have severe drawbacks (not the least of which is that they are billboard obtrusive in some places) when compared to what’s here and what’s coming, they have the potential to accumulate over generations.  Media in a park should turn over every 20 years or so (we’ve gone 50 for much at our park, I am sorry to say)–either due to the obsolescence of the medium itself of the information on it.  If every generation insists on preserving in place its own contribution to the evolving interpretation of the park, over the next century or two these resources will accumulate and these sites risk becoming little more than museums of commemorative and interpretive expression–leaving the fundamental resource (and the reason most of our visitors come) obscured or diminished.

Sure we should preserve Happel’s work and, some day, even examples of our own.  Perhaps the nation needs a museum of commemorative and interpretive expression, but not on the sites the objects in that museum were intended to interpret.

I thought it might be interesting to share a little insight into the unseen issues that we deal with (happily so) on a regular basis….  We work in a fascinating profession at a fascinating time…

5 thoughts on “Are Battlefields Museums of Interpretive Expression, Too?”