This past weekend, we and the Friends of Wilderness Battlefield opened a very different looking Ellwood for the summer season.  Last year, the Friends completed a restoration of the first floor.  This year, the NPS (with great assistance from the Friends) finished new exhibits for Ellwood.  They debuted last weekend.  If you have a chance, go see Ellwood.  It’s worth the trip.  It’s a 1790s middling plantation tucked off the road on the Wilderness Battlefield, where the modern world has intruded little.  It’s most famous as the burial site for Stonewall Jackson’s arm–and for years that’s the only reason most people ventured to it–but now receives more attention for its own history, especially as home to the Lacy family and its use as a headquarters by Gouverneur Warren, Ambrose Burnside, and Samuel Crawford during the Battle of the Wilderness. 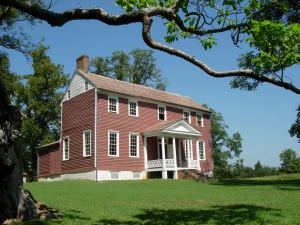 I wouldn’t be mentioning this if there were not a conundrum or two involved.  As many of you know, after its initial stabilization by the NPS in the mid-1980s, Ellwood sat in unimproved condition for more than two decades.  In 1998, the Friends opened the building to the public, and for years visitors saw the interior of the house in a state just this side of ruinous, and most appreciated being able to see a house whose guts were figuratively laid bare.  Here are a couple images of Ellwood “before.” 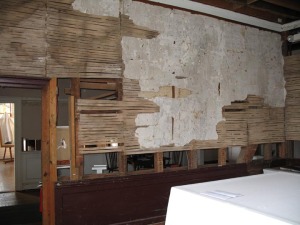 While it has always been the park’s plan to restore Ellwood and open it to the public (something, by the way, that we could not accomplish by ourselves and happened only because of the involvement of the Friends), over time a conundrum emerged over whether the building should be restored at all–or whether it should be stabilized and left laid bare.  Personally, I don’t think we really had a choice–it’s impossible to maintain decay.  At the same time, I don’t think there were many who didn’t lament the polishing up of Ellwood, and the consequent loss of the patina that made it so distinctive.  In the end, we opted to leave unrestored a section of the west room on the first floor…which you can see here. 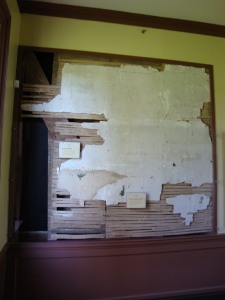 The other conundrum involved the further development of the interior.  Should we leave it unimproved for the Friends’ volunteers to interpret, or develop exhibits in the spaces to interpret the Battle of the Wilderness and the house itself?  After much discussion, we opted for the latter–creating in Ellwood space that would function as a visitor contact station for visitors to the Wilderness.  The challenge here was to develop exhibits and media that did not overawe the house itself.  I confess I was quite leery of this, but the end result squashed that fear, at least in my view.  The new exhibits fit well in the spaces and still let the building itself shine.  I think it’s a nice balance.   The result is we now have three rooms interpreted in different ways:  the room that housed Warren’s HQ is fully restored and furnished as it might have appeared on May 5, 1864.  The west room is partially restored and interprets the history of the house.  And the north room is fully restored and interprets the Battle of the Wilderness and Ellwood’s role in it.

But, getting to this point required some careful consideration of questions whose answers are by no means automatic.  Should the building have been left unrestored, as if untouched?  And, if restored, should it have been left bare to speak for itself (with the help of our volunteers)…or are exhibits the way to go?  I’d be curious how others feel about this issue, and especially would like to know the reaction of those of you who have seen the place in finished form.  For May, Ellwood is open weekends. Starting in June, it will be open daily.  Here are some images as a preview.