From Hennessy (for previous posts on the Bloody Plain Panorama, see here, here, and here–click on images to enlarge them):

Few more subtle landscape features were so important as the swale at Fredericksburg.  Running from near Hanover Street nominally southward through the Fairgrounds to near what is today Lafayette Boulevard (a dirt short-cut during the Civil War), this slight ripple in the ground was surely noticed by no-one until circumstances on December 13 and 14 rendered it the most important feature on the field to thousands of Union soldiers.  Other than the Stratton House, this ripple of ground provided the only shelter on the Bloody Plain.  On an excerpt from the great panorama of the Bloody Plain, I have traced the swale in black across the field, just east of the Stratton house, above.  I also indicate on an overlay of the modern landscape.

We get many questions about the swale.  Without help, few people can find it on the ground today.  It’s about 180 yards from the Sunken Road and is today visible only where modern roads cross it, and along an old backyard alley between Charlotte and Wolfe Streets (most of it has been obliterated by houses built in the early 20th century).  It varies in depth from about 18 inches at Mercer Street to about three feet at Charolotte and perhaps a shade deeper at Wolf Streets.  It’s very difficult to convey with modern photography (at least at the hands of this modern photographer), but I have made a couple of attempts at it.  The first image, taken from ground level, looks toward the swale from the west (the Sunken Road is behind the camera).  Look at the blue car in front of the tree and how it’s obscured from the tail lights down.  It’s in the swale.

This image is taken looking in the opposite direction, looking from the swale toward the Sunken Road (obscured by houses).  You can see that the lower portion of the fire hydrant and distant houses are obscured, and you can see the crest of the swale about fifteen feet in front of the camera.  It’s not much…

For the men on the field, the depth of the swale was not the only thing that mattered. How quickly the ground flattened out behind them determined the breadth of ground that was protected.  At Mercer Street the swale flattens out quickly; no doubt only a rank or two of men could find protection there. But at Charlotte and Wolfe Streets, the swale is broader–in places, there’s probably twenty-five feet of ground that would have been protected by the crest of the swale.  No doubt men realized this quickly and crowded in probably several ranks deep.

But at no place did this slight dip in the ground provide anything but uncertain safety, as attested by dozens of men.   A man of the 84th Pennsylvania said the swale was in fact a “little hill not over 4 or 6 inches higher than your head….”  John L. Smith of the 118th PA (and author of an excellent set of unpublished letters), declared, “safety was only found in hugging the ground as tight as a human body could be made to hold on to the earth.”   He added that that desperate men piled bodies in front of them to gain a few more inches of protection.  Many others offer similar testimony.  Still, as another soldier wrote, “it was almost sure death for a man to even get upon his knees.”  A soldier who looked on from a distance wrote of  watching “all day one of the most painful and interesting incidents of the war.  The first and second Brigades of our Division, lay flat on their faces, and in full range of the rebel sharpshooters, unable to raise head or hand, or roll over, eat, drink or sleep.  And thus these poor fellows burrowed thirty-three hours, one after another picked off, while the Tartars behind the stonewall would not allow one of the wounded to be removed.  It was almost at the risk of certain death that any of the poor fellows were carried off.”   He also remembered a soldier who fell in behind a wounded horse lying on the ground at the swale: “the animal was hurt just enough to keep moving around, and for hours the soldier kept wriggling behind the uneasy animal to keep out of the way of the rifle bullets which tore up the dust all around him.”

Lastly, I share a very compressed and stylized portrayal of the early Union attacks against the Sunken Road.  Things in this image are much out of alignment, but notice the cluster of men lying on the ground to the left.  This is the only image I know of that attempts to portray the swale in any form. 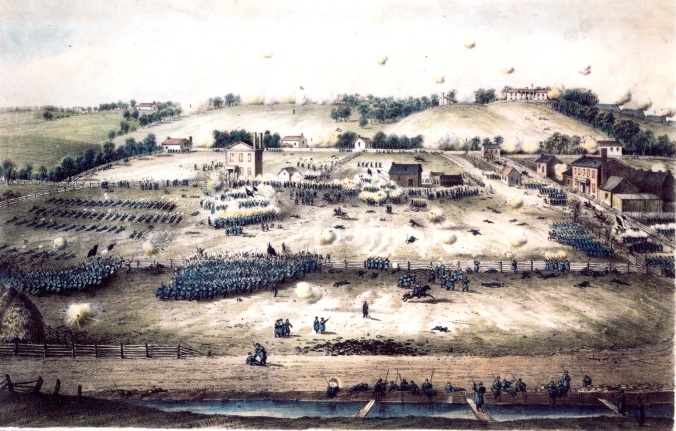 Finally, though the swale is hardly discernible in the great panoramic photograph, if you look closely you can roughly follow its course–and so I include this unaltered extract for you to explore here.

Next up, unless something else more stimulating comes to mind, we’ll start looking at the houses in this view and how this and other images helped inform Virtual Fredericksburg.