In a recent interview I likened my historical conclusions to new cars.  Those begin depreciating in accuracy at the moment of publication, i.e., the moment of leaving the dealers’ lots.  At best, I can hope that the quality of the underlying historical research and interpretation proves sufficiently high to keep the rate of deprecation low.

What follows considers one such historical conclusion ultimately “gone bad;” the consequent mystery regarding a feature of The Bloody Plain in front of Fredericksburg’s Stone Wall and Sunken Road; and a broader conundrum regarding the degree to which our interpretive publications, signs, and other programming should be designed to “sunset,” or to accommodate—or even anticipate—revisions reflecting newly discovered information or more plausible interpretations.

Over the course of many examinations of this photograph of the Bloody Plain, viewed from atop Marye’s Heights in May 1864, I became fascinated by what appeared to be a berm-like feature.  For me this was defined by a white line bisecting two narrow zones of dark, freshly disturbed ground–darker strips that in turn bisected lighter patches of ground.  Here’s a detail from a digital copy of the image, in the collection of Fredericksburg and Spotsylvania National Military Park:

Although William A. Frassanito’s Grant and Lee: The Virginia Campaigns did not evaluate this particular photograph, Frassanito noted that photographs taken atop the heights that month were likely made on either May 19 or May 20.  When I published the image in a book in 1995, my caption described the white line and its bordering dark zones as a berm denoting the site of a freshly dug trench.  I interpreted this feature as the burial site of Federal soldiers who died in an ambulance train carrying 500 casualties of the Battle of Spotsylvania Court House.  (Union dead from the December 1862 battle also occupied trenches in the plain, but the known locations of those excavations are in, and just outside of, the left middleground of the photograph.)

I based the “burial” conclusion on the following account by William Howell Reed, a physician with the United States Sanitary Commission.  He recounted events that led to the excavation of a “long trench” on the night of either May 19-20 or May 20-21, 1864:

Five hundred of these brave men were brought back wounded or dying… The train entered a ploughed field at the foot of Marie’s Heights at nightfall. The camp was settled, the horses picketed, the drivers had lain down to rest near their camp fires…. Visiting the long streets of ambulances, the dead were first removed and laid gently side by side, and, while the kitchens were supplying the stimulants and food, the surgical dressings went on. Under one of the ambulances was a lad, severely wounded. He had crawled out to catch a breath of air…. As the lad wished to be baptized, we brought water from a spring, and there, under the ambulance, at midnight, this touching service was performed for the poor boy who was so soon to enter the life eternal. With a sleeping powder we left him…. The first streaks of dawn brought the drivers to their feet for their start onward…. The now deserted field, bathed in the soft sunlight of that morning, had still its duty for us in the burial of the unknown soldiers who had died. Under the light of flickering candles throughout the night everything had been examined and marked that could give identification or home address, and our labors ended for them as they were laid to rest in the long trench….

To me, the mention of a “spring” as a source of baptismal water complemented the visual evidence of the “berm” for locating the wagon-park and the subsequent burials in that portion of the plain shown in the photograph.  The most prolific “spring” present at the foot of Marye’s Heights was Cold Spring.  It emerged from the base of an embankment beside the Unfinished Railroad a short distance to the right of and just outside the area depicted in the middleground of the photograph.  (Another nearby water-source, Poplar Spring, was more prolific than Cold Spring but was located halfway to the top of the heights and to the left of the area shown in the image.)

In an article published in Military Images magazine in 1998, I revisited the subject of this photograph and other Fredericksburg images, correcting errors from my book, modifying other photo-identifications, and adding new information.  As part of that reappraisal, I questioned my earlier certainty for the May 1864 image because of the oddly straight alignment of the trench.  My article therefore qualified the “burial trench” identification with “perhaps.”

It turns out that I should have abandoned the “burial” description entirely.  My colleague Frank O’Reilly, author of the definitive study, published in 2003, of the fighting on the Bloody Plain in December 1862, has noted that the narrow, dark zones that I had interpreted as disturbed ground paralleling a burial trench likely represent a rectangular ploughed field, photographed from an angle that exaggerated the appearance of narrowness.

I remained reluctant, though, to abandon my “perhaps” caveat.  What was the white line extending straight through the dark area?  Where, if not here, was the “long trench” mentioned by Reed?

An answer to the first question came to me several days ago, as I studied the background details of an 1863 photograph of Fredericksburg, an image now in the collection of the Western Reserve Historical Society and made by a Northern photographer positioned on the opposite bank of the Rappahannock.  Depicting much of the same section of the Bloody Plain from the other direction, the Western Reserve photograph shows a whitish line bisecting a darker zone and terminating at Mercer Street, just east of the Innis House and just west of the Stratton House.  From all appearances, the darker zone is a field of either recent cultivation or composition distinguishing it from the lighter colored fields on either side.

Due to copyright considerations, I cannot post the Western Reserve photograph at this time, but here’s a public-domain view, from the Library of Congress collection, of the same area of the Bloody Plain and also taken from the opposite bank of the Rappahannock in 1863.  The Library of Congress photograph is grainy but still sufficient to show the two dark zones, merged together as a narrow band since the photograph lacks the resolution to show the white line visible in the Western Reserve image: 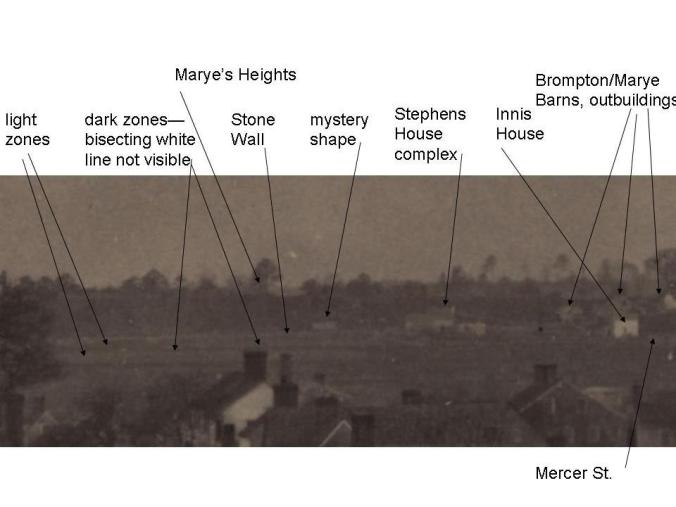 Because of the Western Reserve photograph, supported by the Library of Congress photograph of similar vintage, I now realize that my “line” is straight because it’s likely a road on or near the right-of-way of modern Willis Street.  More obviously, my straight line through a narrow, dark field predates the May 1864 burials by a year.

The photographs prompting my correction raise at least one mystery directly, and a second indirectly.  Where at the foot of the heights, then, was the “long trench” containing the Federal soldiers who died in 1864?  It may still lie within the area depicted in the May 1864 image, although not at the location I originally supposed.  It may have been dug the night or morning after the photograph was taken.  And what is the low, structural shape visible in the Library of Congress image, just to the left of the Stephens House complex?  (The shape also appears in the Western Reserve image.)  A large tent or other type of temporary shelter?  No antebellum structures are known to have existed at that location.

(Note also the proximity of the cluster of barns and other buildings on the lower slope of the Brompton/Marye House property, opposite the Innis House on the Stone Wall-bordered Sunken Road.  As many times as I’ve led walking tours past the Innis House, it’s hard to imagine that cottage being on the fringe of what was almost a mini-hamlet composed of it and the lower buildings of Brompton, but the photograph indicates that such was indeed the case.)

More broadly, my historical error regarding the burial trench exemplifies challenges of revision and dissemination.  How quickly and by what means do we incorporate new information or better-supported conclusions into existing historical interpretation?  Do other writers and researchers share my persistent sense of driving a new car off the lot and straight into a process of depreciation?

At the low-tech or more traditional end of the media spectrum, park rangers and other tour guides can simply add or subtract information from their verbal presentations, while the discussions we publish in books and magazines can revise one another, or revise themselves in subsequent editions.  At the other end of the spectrum, Virtual Fredericksburg, podcasts, and blogs offer vehicles for quick correction and revision, as this blog-post demonstrates.  Yet this post is unlikely to reach all of those who may have read my now-erroneous conclusions about the burial trench of 1864.  While that feature, wherever its actual location, was far from the Bloody Plain’s most significant landscape element, and is not discussed on any extant signage today (or, to my knowledge, in any regularly occurring presentations by rangers or tour guides), I still feel an obligation to “get my story right”—to revise and correct it in as practical a manner as possible.

In updating information about historical stories and resources that possess greater significance than my trench, and are discussed on signage, the National Park Service risks a proliferation of markers, monuments, and other outdoor devices, some of which may have already acquired significance of their own regardless of historical accuracy as we now judge it.

So besides the media listed above, what revision-friendly methods of interpretation might you propose?  Are, say, outdoor signs of the waist-high design common in parks today, but that use the technology of programmable, electronic billboards, within the realm of foreseeable possibility?  Particular technologies aside, to what degree should we signal the likelihood of future revision by including caveats along with our stories, and at what point do caveats diminish the ideal momentum and clarity of compelling narrative?  To what extent could we leave revision to “the consumer,” by offering side-by-side presentations of conflicting but equally well argued and supported historical interpretations, or of alternative possible solutions to enduring mysteries?  Yet how much “choice” and uncertainty is reasonable—digestible—when the typical visitor possesses a very limited amount of time for touring an historic site?

2 thoughts on “When Historical Conclusions Go Bad; or, What was I Thinking, and How Do I Fix It?”