From Hennessy:  (Note: this post deals with a historic site that is privately owned. While the property owner has been gracious in permitting us occasional entry and establishing a deed restriction that will protect the house site and about ten acres, access to the site by the general public is not permitted [which is one reason we’re offering up this glimpse].  We will attempt to organize a tour to the site for those of you who wish to come in the fall or spring.  But in the meantime, please respect the property owner’s rights and do not attempt access.)

One of the real challenges that faces the NPS is how to respond when significant sites outside our boundaries are threatened. Opinions on the proper role of the NPS in such cases–which are quite common hereabouts–range from, “Keep your nose out of our business” to “buy it all” (that, by the way, ain’t happening).   When a site is on or near our boundary, I think most people understand the interests that compel the NPS to offer an opinion on the likely impacts of development on that site.  But when a site is well beyond our boundary, our interests narrow, sometimes to little more than a hope something good happens.  Most commonly, in such cases we play the role of advisor rather than advocate, and then only when invited to do so by someone involved in the issue–be they a local government, a sister federal agency, or the landowner or developer.

One case years ago had a fairly happy ending.  We were asked by Hal Wiggins of the Corps of Engineers to advise on the possible long-term preservation of Belvoir–the Yerby home beyond the southeast edge of the Fredericksburg Battlefield.  Long story short, the end result was that the site of the house and ten surrounding acres was put under deed restriction (largely thanks to the efforts of Hal and Noel Harrison).  While the restriction does not permit public access, it ensures the site will be forever preserved.  It’s a good thing.  The site of Belvoir is a magnificent place.

This view is of the house site, taken from about the location of the small tree to the left of the steps in the historic photograph. Jackson, Lee, Ewell, and a mortally wounded Maxcy Gregg passed over this ground

While it may be difficult to ponder the words romance and Stonewall Jackson in the same sentence–much less in the same physical space–there is indeed one such place where the two famously come together:  Belvoir, the home of Thomas Yerby.  It was at Belvoir that Thomas J. Jackson spent the last happy week of his life, with his wife Anna and five-month-old daughter Julia. The story is well known. Few passages in Freeman’s Lee’s Lieutenants surpass his description of Jackson’s time at Belvoir, and Anna Jackson’s own memoir offers memorable images.  From there, of course, Jackson would ride to victory and tragedy at Chancellorsville.  He next saw his wife on his deathbed at Fairfield Plantation–today’s Jackson Shrine.

Lee came here too, the last week of March 1863, when he suffered a severe respiratory infection that we now know to be his first bout of heart trouble.  He remembered the doctors at Belvoir “tapping me all over like an old steam boiler before condemning it.”

Today the site of Belvoir is privately owned, largely inaccessible, and overlooked by most. But it is, in fact, one of the more compelling historic places I have ever been. The house burned about 1910, and the property would not again be occupied. Though deep in the woods, tucked amidst briars and poison ivy, as a ruin and archeological site the place retains much of its integrity. Each spring Yerby family daffodils by the hundreds bloom all over what was the yard.  The cellar of the big house is still clearly visible, with at least a couple of its walls intact. East of the house is the Yerby family cemetery, covered with periwinkle (as so many family plots were). West of the house is evidence of several outbuildings–some of them no doubt home to some of Yerby’s 41 slaves in 1860 (only four of the plantation’s 45 residents in 1860 were white)–including an ice house. Terraces step down to the house from a hill behind it–terraces no doubt created by slave labor, and once the site of elegant gardens long ago gone (except for the daffodils).  And winding through the woods are the several simple roads that led to Belvoir–driveways that in 1862 carried hundreds of wounded Confederates (including Maxcy Gregg, who died in the house) and in 1863 the elite of the neighborhood and brass of the army for a lavish reception welcoming Dick Ewell back from the wound he received at Second Manassas. These roads came from the Hamilton Place at Forest Hill (along Mine Road) and Hunter’s Lodge, the home of John Pratt Yerby, the site of which now resides under a cul-de-sac on the Lee’s Hill subdivision.

Several years ago I did an article on Belvoir for the Journal of Fredericksburg History.  You can read it by clicking here (a new window will open).

To see images of Belvoir as it exists today, continue reading beyond the jump.

The pit to the ice house, about 50 yards west of the main house foundation

A portion of the basement wall of the main house

The foundation of the main house 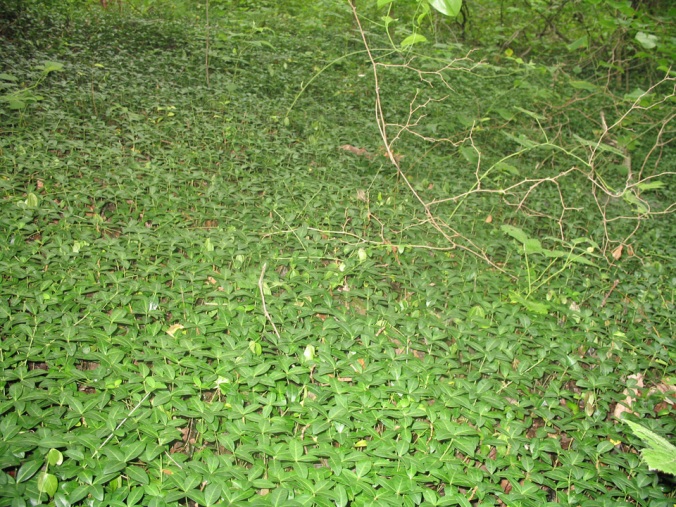 Periwinkle is the surest sign you're at the burial ground

The Yerby family burial ground at Belvoir, about 100 SE of the main house