Of all the things that should have been recorded by an artist or photographer in wartime Fredericksburg, it would seem to be the likeliest subject: the wire suspension bridge constructed by Union engineer Washington Roebling in July 1862. But, this curiosity–certainly one of the few suspension bridges built in Virginia prior to 1870–escaped the lens and the pen, at least so far as we know.

Washington Roebling would later become famous for building the Brooklyn Bridge, but in mid-1862, when the Union army arrived at Fredericksburg for the first time, he was simply the son of a famed bridgebuilder (John Roebling) and an engineer officer on the staff of Union commander Irvin McDowell.  The suspension bridge at Fredericksburg would be the first bridge Washington Roebling could call his own creation.

Roebling during the war

The need for the bridge arose from heavy rains that struck Fredericksburg on June 4, 1862, sweeping away (to local citizens’ delight) the Union army’s bridges on the Rappahannock, including the canal-boat bridge at the town docks, the newly rebuilt railroad bridge, and a pontoon bridge at the base of Hawke Street. Additional rains a few days later confirmed the need for something flood-proof, and so Roebling received his assignment.

He decided on his family specialty: a suspension bridge.  His father, John Roebling, had famously constructed the suspension bridge over the Niagara River near the falls, as well as bridges at Pittsburgh and Cincinnati. His great innovation was the improvement of “wire rope”–wire interwoven much as hemp is to make standard rope. When young Washington Roebling took to the field with the army in 1862, he brought wire rope with him–strands substantial enough to support 30 tons. (I’m no engineer, but from what I can determine, a wire rope with that capacity would be about an inch in diameter; if there are engineers out there who can provide additional information, feel free to comment.)

Work started about July 1 and lasted just under three weeks, with ten soldiers and 30 “contrabands” doing the hard labor.  (Roebling appropriated some of the lumber from Joseph Ficklen–likely from the remnants of the destroyed Falmouth Bridge, which Ficklen owned.) The end product was an impressive structure–Roebling declared that “it will defy the highest freshets that will ever come,” wrote the Unionist newspaper Christian Banner. It was 1,028 feet long–more than twice the width of the river itself, using thirteen piers and 14 spans varying between 75 and 85 feet.  Indeed, the length of Roebling’s bridge was almost precisely the length of the modern Chatham Bridge on the same site (bear in mind, though, that the ground at both ends of the modern bridge is altered considerably by fill).

The approximate span of Roebling’s bridge is indicated in red–1,028 feet.

What did it look like? We can determine a few things from what we know.

Most obviously, the bridge’s terminus on the Stafford side must have been nearly at what is today River Road.  Putting the terminus well up the river bank would have given Roebling the additional height he needed to “defy the highest freshets.” It’s also likely that at least one and perhaps two piers were on dry ground on the Stafford side of the river. The 1863 image of the Chatham bridge remnants shows eleven piers. Allowing that at an additional one may have been hidden by the bank in the foreground, at least one must have been on dry ground. Indeed, the structure of the bridge would have demanded it; the varied length of span between piers likewise suggest it, given that the piers in the river were uniform and fixed.

At either end of the bridge would have been the superstructure to support the wire cabling. From each tower, two wires hung on each side, attaching to the bridge decking somewhere mid-span, and connecting to the tower on the opposite bank. It’s likely the towers looked something like this:

But, bear in mind that this bridge was not the pure suspension bridge that is Golden Gate or Niagara Falls. This bridge also had a truss system built upon piers. The truss system and wires worked together to bear the loads.

How high was the bridge? A strong hint at the answer to that question is in the 1863 image.  I include a blowup here. 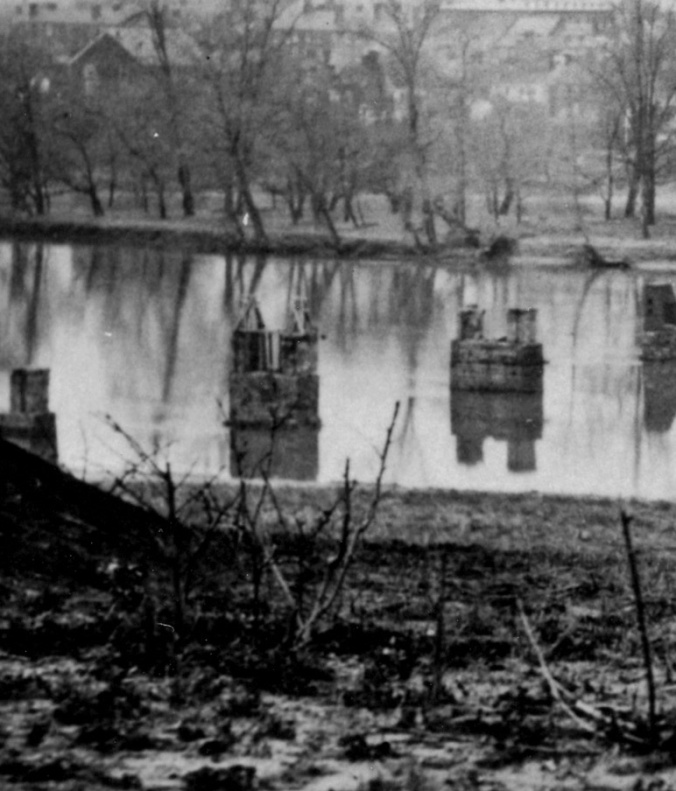 The second pier from the Stafford shore clearly shows the remnants of what must have been Roebling’s efforts to increase the height of the existing piers by building support structures atop them (the seventh pier from the left holds a similar structure). That these are Roebling’s work is virtually certain; so far as we know, no attempt was made to rebuild the Chatham Bridge after the destruction of Roebling’s wire bridge on September 1, 1862. While there is no way to calculate precisely the height based on the photographic record, a reasonable estimate would put the bridge 15-18 feet above the level of the river (the current bridge is probably 30 feet high). It did indeed survive any freshets that threatened it the remainder of that summer.

Roebling’s bridge opened about July 18. The newspaper declared, “This bridge will be a great convenience for citizens, if they are allowed the privilege of using it.” Whether or not they were, we do not know. The bridge survived until the Union evacuation of Fredericksburg on September 1, 1862, when it was burned.

There is a fair possibility that we will learn a good deal more about Roebling’s bridge (we’ll keep you updated). We are about to check into his papers at Rutgers and RPI. The former includes his wartime letters; the guide for the latter includes an intriguing reference to a plan for “construction of  military suspension bridge, 1862.” Hopefully, we’ll have more on this soon.  (This, by the way, would be a terrific project for someone with skills in digital modeling….)

One thought on “A Mystery: Roebling’s “Wire Bridge” on the Rappahannock”