From Harrison, with an intro by Hennessy: 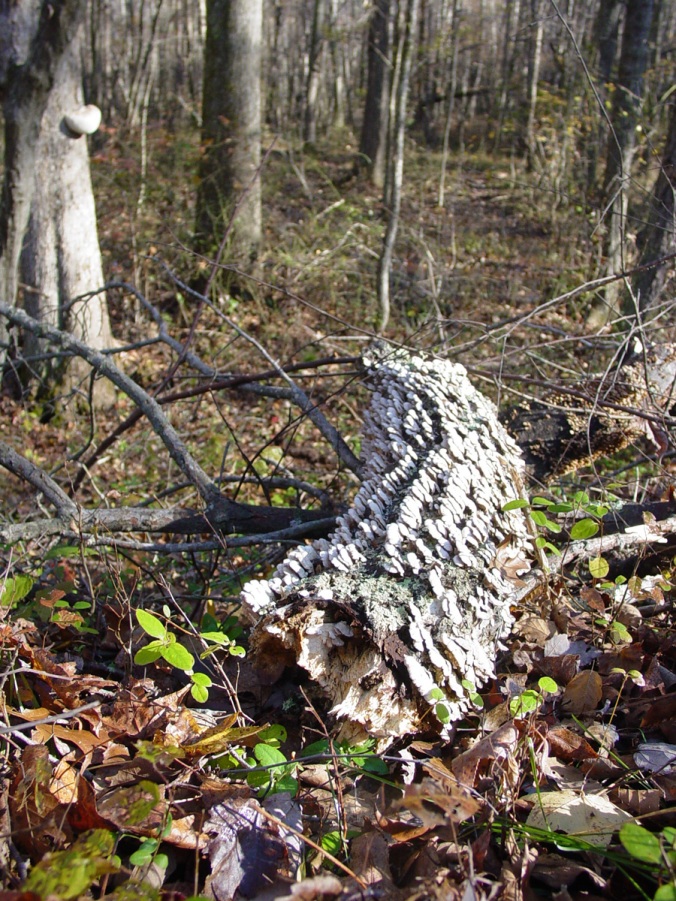 Intro by Hennessy:  There are sometimes matters of conventional wisdom that upon reflection really don’t make that much sense. To me, one of these relates to the origin of “the Wilderness,” the 70-square-mile area of Spotsylvania and Orange Counties that has loomed darkly over our region much as the deep forest loomed over Dorothy and her cohorts in the Wizard of Oz. The conventional wisdom is that the Wilderness was the product of two things: inherently poor soil and the rampant clear-cutting to supply local iron furnaces with characoal.

There is, in fact, nothing inherently remarkable about the soil in the Wilderness. Left alone, it supports a forest like much of the rest of Virginia Piedmont. Modern visitors are often confused by the typical appearance of the forest there–presuming it to be inherently different. It is not. Rather, it was made distinctive by the acts of people.

What follows is a much-needed critical look at a critical question. Wherefrom the Wilderness? 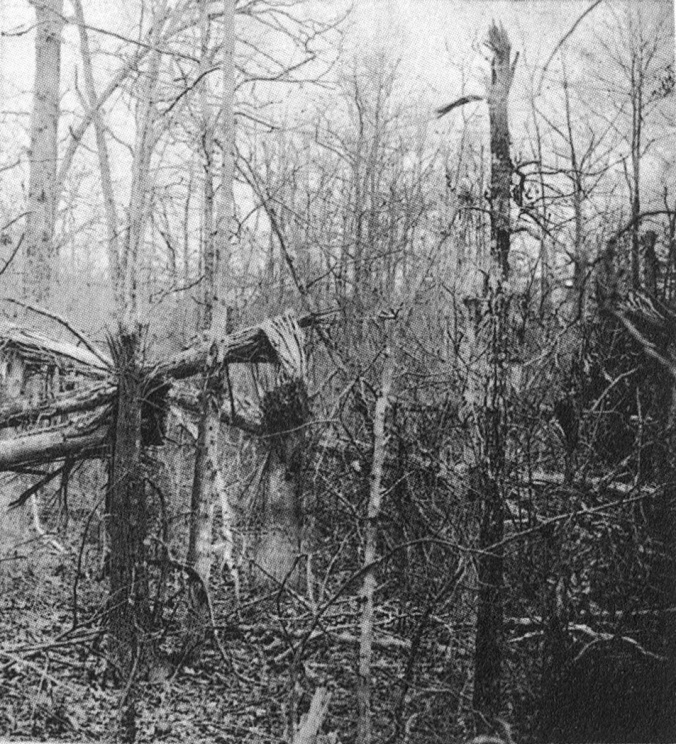 The point of departure for questioning the convention is the recent completion of what the NPS calls a “Historic Resource Study” of Catharine Furnace, by Dr. Sean Adams at the University of Florida (Catharine Furnace is a mid-1800s furnace located on the Chancellorsville battlefield). Sean was spurred on by some preliminary work done by our own Noel G. Harrison, the incomparable chronicler of the pre-Civil War landscape in our region. The work of those two forms the basis for what follows, in two parts.  First, a consideration of the soil and tobacco production.

Noel G. Harrison has written (in a file memo he produced for Sean Adams’s use in 2008):

A Progress to the Mines, the 1732 travelogue by William Byrd II, describes the landscape of the future battlefields of Chancellorsville and the Wilderness as composed in large part, if not entirely, of scrubby “poison fields” of saplings, a full century before the appearance of the timber-consumers–Catharine Furnace, the gold mines, and the plank road–that are now often identified as the origins of a landscape described in exactly the same terms during and after the 1860’s.

I rode eight miles together over a stony road, and had on either side continual poisoned fields, with nothing but saplings growing on them. Then I came into the main county road, that leads from Fredericksburg to Germanna [emphasis added].

A day or two later, Byrd traveled with Colonel Alexander Spotswood from Germanna to the Tubal mines and furnace, situtated on the future Chancellorsville battlefield and along what in May 1863 became the eastern curve of the Union army’s horseshoe-shaped defensive line covering U.S. Ford.  (The end of iron production and/or mining at the Tubal site and the beginning of the same activities, in the mid-1830’s, at nearby Catharine Furnace and its mines were separated by about half a century.)  Traveling towards Tubal in 1732, Byrd and Spotswood were headed east, and Byrd again described a scraggly landscape:

We drove over a fine road to the mines, which lie thirteen measured miles from the Germanna…. The colonel has a great deal of land in his mine tract [at least 15,000 acres] exceedingly barren, and the growth of trees upon it is hardly big enough for coaling [emphasis added].

This raises an important question:  Was the extensive sapling-landscape due to a cause other than, or operating in tandem with, charcoal-making for iron production? 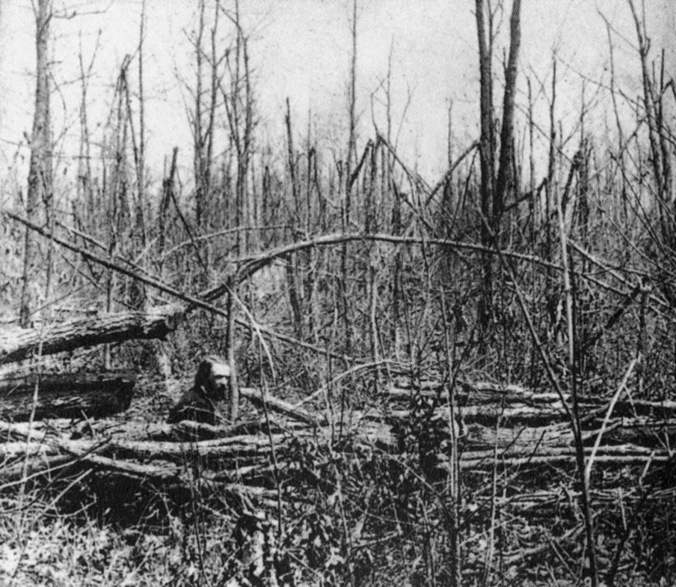 While paging through Paula S. Felder’s study, Forgotten Companions: The First Settlers of Spotsylvania County and Fredericksburgh Town (1982), an astonishing set of agricultural statistics caught my eye.  This data, when we consider its geographic overlap upon the future Civil War battlefields, suggest that tobacco cultivation might bear much of the responsibility for the “poison” landscape.

An annotated map on page 31 of Felder’s book shows that the area of Spotsylvania County north of the Ni River, east of Wilderness Run, and west of Motts Run–encompassing Spotswood’s mine tract and furnace and most of the land traversed by Byrd in 1732 (as well as most of the future Chancellorsville battlefield and that part of the Wilderness battlefield around the Brock Road/Plank Road intersection)–had once led the county in tobacco production.  A tobacco census found nearly 1 million tobacco plants growing in this zone in 1724, and a subsequent census found 1.3 million there in 1726–the last figure representing the largest of any tally reported for each of the six zones into which the county was divided for these counts.

Byrd in 1732 recorded seeing only “saplings” and “barren” land as he crisscrossed the site of the tobacco boom of the early-mid 1720’s.  Why did he not see tobacco plants, instead?  If we assume that large-scale tobacco cultivation began on the Spotswood lands, in the area of the future battlefields, around 1722 (one or two years after Spotswood acquired the mine tract), perhaps tobacco’s notorious propensity to deplete the soil had soon rendered it unfit for further cultivation prior to Byrd’s arrival, cultivation that ended in time for early-forest vegetation to take root and reach the general height of saplings by 1732.  Felder’s book suggests a supplemental or alternate explanation:  tobacco prices in Spotsylvania County hit the lowest-recorded levels in 1728, and “demand increased” beginning only in the year of Byrd’s visit.

My preliminary interpretation of this particular evidence is:

– The “poison fields”/sapling-heavy landscape of the future Wilderness and Chancellorsville battlefields had appeared by the early 1730’s.

– The iron-gold-plank-road enterprises operating in the 1830’s-60’s represented merely the latest cycle in a preexisting tradition of de-forestation at the sites of the future battlefields.  The cycle of the 1830’s-60’s, moreover, doubtless fostered erosion and water pollution yet may have represented a more benign use of the land vis a vis soil exhaustion, since tobacco cultivation was by then no longer the area’s principal economic engine.  (Yet the damage that local soils sustained in the 1720’s would have been exacerbated by any continuance of tobacco production during the remainder of the eighteenth century and in the absence of nutrient replenishment efforts such as guano-spreading.)

– The principal “damage” of the mineral-extraction of the 1830’s-60’s was perhaps less a matter of immediate impacts such as erosion and water pollution and more a matter of diverting resources and energies that might otherwise have been devoted to the introduction of widespread mixed agriculture and extensive nutrient-replenishment on a landscape previously ravaged by tobacco–to the creation of a broad network of farms of the scope and longevity of Ellwood (a large plantation-clearing on the future Wilderness battlefield that represented the most dramatic exception to the local rule of a few, small farms separated by long stretches of scrubby woodland).

Next up:  the role of clear cutting in creating the Wilderness the armies encountered in 1863 and 1864.

3 thoughts on “The Origins of the Wilderness: Part I–The Soil”