In two previous posts (found here and here), the possible locations for J. Horace Lacy’s slave cabins at Chatham were discussed. The 1860 slave census reveals that Lacy owned at that time, 39 slaves on his Chatham plantation, 48 slaves at his Ellwood property in Spotsylvania and Orange counties, and hired out 8 slaves to individuals in Fredericksburg. Of the 95 slaves owned by Lacy on the eve of the Civil War, little to almost nothing is known about them. Who were they? Where did they go and what became of them following emmancipation?

The names of slaves were not recorded in the 1860 census. We simply have their ages and gender. Tracking them is extremely difficult, but in the case of two of Lacy’s slaves we know that upon securing their freedom, these two men chose to join the Union army.

his enlistment in 1863 until he was mustered out of service in 1866. His army service record states that he was born in Spotsylvania County between 1840 and 1842. After the war, he returned to the area and worked as a farmer. His 1926 obituary provided the identity of his prewar owner, as it stated he had been born “into the family of the late J. Horace Lacy…” Sprout is buried in the Fredericksburg National Cemetery.

Andrew Weaver is another of Lacy’s slaves who served the Union following his escape from slavery. In Weaver’s case, we are fortunate to have, in his own words, more specific information about his service in the army and his own admission of ownership by Lacy.

In his service and pension file, Weaver stated that he was born March 16, 1845 at “Stafford Co., Chathams Farm, Virginia.” He was the son of Joe and Julia Weaver and claimed “I was a slave of Major Horace Lacy.” Early in the war, Weaver seized the opportunity to escape slavery when he came into contact with the 1st New Jersey Cavalry and hired himself as a servant to 1st Lieutenant Jacob R. Sackett. More than likely, this occurred during the spring and summer 1862 Union occupation of Fredericksburg and Stafford County. He traveled to Washington, D.C. and on July 8, 1864 Weaver joined the 23rd United States Colored Troops (see here for an earlier post by Noel Harrison on the 23rd USCT’s first engagement, at which Weaver was not present). The regiment was made up of former slaves and other freedmen from Virginia, Maryland and the District of Columbia. What follows is a document found in Weaver’s army pension file. It is a description of his wartime service, in his own words.

On this 3d day of October, 1900, at Washington State of D.C., before me, H.W. Roome, a special examiner of the Bureau of Pensions, personally appeared Andrew Weaver, who, being by me first duly sworn to answer truly all interrogatories propounded to him during this special examination of aforesaid claim for pension, deposes and says:

I am 54 years of age; my post-office is 819 – 24 St NW this City. I was born near Fredericksburg Stafford Co Va. My father was Joe & my mother was Julia Weaver. I have a brother, Walker Weaver who now lives on Jefferson St Geotown & a sister —– Ann Jones on H near 24 St this City. I was a slave of Major Horace Lacy. Peter Churchwell, who served in the my company was raised near me. When the war broke out, I hired myself as a servant Lt. Sackett 1 N.J.V. Cav. + was with him until the 2d battle of Bull Run Va. when he came to Wash D.C. + I came with him + he discharged me from his service, and I lived with my mother on 21 + G St NW until I enlisted. My mother + father are dead. I enlisted at Capt Sheets office in this city on July 8, 1864 + I was examined by the Surgeon. Peter Churchwell enlisted at the same time I did and he was present when I was examined by the Surgeon. I was then given a uniform + then was sent to Camp Casey Va, where I was given a musket and drilled.

My Capt was Fesenden Co H, + Capt Hurd of Co B. I enlisted in Company H, 23d Reg US.C.T. and I was transferred at Fort Harris Va to Company B, and I was discharged from that Company, + I have my original certificate of discharge now in my possession (shown to Examiner). My 1 Sgt Jno Mahoney, Sgt. Mitchell of Co B, Sgt. Height, Corpl Parker, Comrades Peter Churchwell, Albert Settles, Tillmon Johnson, that’s about all I can now remember.

The Reg was at Camp Casey Va about 2 or 3 weeks, when by boat, to City Point Va. + then to the front, where we recruits joining the Regiment. There was about 150 recruits of which I was one + Peter Churchwell was another, that joining the regiment on the front, cannot remember the place where we joined the regiment. The first fight we were in was at Petersburg Va. + at Bermuda Hundred. I was wounded at the battle of Petersburg Va July 1864, in my left side, ball wound. Capt. Hurd was shot the same time that I was, + he went with me to the Summit House Hospital Philadelphia Pa, he was shot through the neck. When we were taken from the battlefield I was sent to Jackson Hosptl, + then to City Point Hospital and from there I was sent by boat to the Summit House Hospital Phila Pa. and was there 3 or 4 months, and then rejoined my regiment which was then near the Weldon R.R. John Tyler 1 Sgt Co E was I the Summit House Hosptl, + he was present when the Surgeons cut the ball out of my shoulder.

The Regiment went from Fortress Monroe by Steamer Richmond to Brazos Texas, we then went to Brownsville Texas, + to Edinsboro Texas, + then back to Brownsville + to Brazos Texas where we were mustered out of the service + then took steamer to New Orleans La, + took boat to Cairo Ills, + then took cars to Wash D.C. where we were discharged from the service. I have lived in this city ever since my discharge. I was first married to Martha Jane Hamon by Rev Alexander 3d St Baptist Church, about 32 years ago. I have my marriage certificate at home, my wife is now living with me, my wife was a widow of Ike Thomas when I married her. I had never been married before I married Martha Hamon, + we have never been divorced. All of my children are over 16 years of age. A son Andrew age 25, Dora – 23, Birney age 21, Marty, 20.

I never served in the military or naval service of the U.S. except as stated in this deposition. I was not in the Confederate service in any capacity. I was not on detached service but was always with my reg except when in hospital as stated. When I enlisted I was 19 years old and I am now 5 ft 9 in high (complexion hair + eyes black). I am a pensioner at $6.00 per mos. I have never paid my Atty any money for prosecuting my claim, he was paid by the Pension Agt. I have my pension ctf + blank voucher in my possession. I have never borrowed money on my pension ctf. + never sign or swear to my quarterly voucher before the 4th of the month that it is due. I am an applicant for an increase of pension. Albert Settles is dead, and I do not know where Tillmon Johnson is, but have heard that he was dead. I have known Charles Churn for 25 or 30 years.

Other documents in Weaver’s pension file provide additional details about his life. When he enlisted in 1864, he did so as a substitute for Levi A. Schloss. His wound on July 30, 1864, during the Battle of the Crater, is described as a “ball entered the left side a little above and back of the hips and passing upward made its exit at the left shoulder blade.” 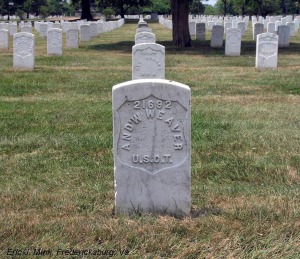 He was sent to Jackson Hospital, then “Summerridge Hospital,”  then finally to Summit Hospital in Philadelphia. After the war, he worked as a laborer and gardener, renting a home in Washington, D.C. On July 8, 1867 he married Virginia Thomas (aka Martha Thomas). The couple had four children: Andrew, Jr., Dora, Birney, and Marty. Martha died on May 3, 1906 of acute rheumatism. Weaver remarried, taking Amanda Foley as his bride on June 4, 1907. On May 20, 1915, Weaver died at Freedman’s Hospital in Washington, D.C. of “Hypertrophy Prostrate Gland.” At the time of his death, he was living at 407 Saint Asaph Street in Alexandria, Virginia. He is buried in Section 23, Grave 21692 at Arlington National Cemetery.

While this does not provide us with information concerning Sprout and Weaver’s lives or experiences as slave on Lacy’s plantations, it does help us learn a little more about the former inhabitants of Chatham and/or Ellwood. Both Sprout and Weaver sought freedom, and once it was gained, they returned to Virginia to fight to maintain their freedom, as well as secure it for others. They were not alone, as many other former slaves from Fredericksburg and the surrounding counties escaped northward, only to return as soldiers. More on that in a future post.

Note: The information on Sprout and Weaver is based, in part, on earlier research conducted by former NPS employees Liesbeth Neisingh and Dr. James K. Bryant, III.

6 thoughts on ““I was a slave of Major Horace Lacy.” – Andrew Weaver of the 23rd United States Colored Troops”