The fence that once surrounded the monument marking Jackson's wounding at Chancellorsville is clearly visible in this image of veterans at the site.

On the scale of mysteries, it ranks low, but its unraveling is, at least, interesting. For many years we have wondered at the fate of the decorative fence that once surrounded the monument to the wounding of Stonewall Jackson at Chancellorsville (for an interesting photo exploration of the monument, see John Cummings’s post over at Spotsylvania Civil War Blog).  The distinctive fence is visible in early images of the monument.  But, clearly, it’s not there today. What happened to it?

Rumors and presumptions about the fence had been around for years, but the mystery persisted (at least for me) until last year when I was doing some work on a presentation on Fredericksburg’s homefront experience during the Second World War. Hunting through the excellent photo collection at the Historic Fredericksburg Foundation, I came across a number of photos of the scrap drive held in September 1942. 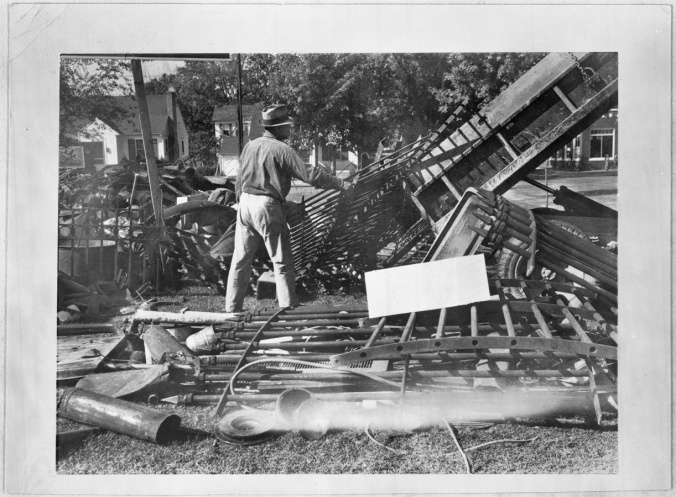 In a shot of the accumulated scrap deposited near the corner of Wolfe and Prince Edward Streets, there it was, clearly visible among the detritus: the fence from the Jackson wounding monument. It is a measure of the patriotic fervor of the moment that the NPS felt compelled to peel off some of the historic fabric in its charge to support the war effort.

Beyond the historic fence, patriotic citizens donated a number of things that would today make us cringe with a sense of loss. Some examples:

The 122-year old furnace from the National Bank building on Princess Anne Street was one of the biggest items donated–1,500 pounds. It hadn’t been used in at least 50 years.

.Judge Alvin T. Embery donated his family’s collection of Civil War cannonballs picked up off area battlefields–….nearly 1,000 pounds of solid shot and shell.  Almost certainly, the shells in the collection were still active (no doubt generating a little bit of excitement as they tumbled into the smelter).

The Free Lance-Star reported:  Herbert and George Haley of William Street donated an unexploded cannonball which they want used to “kill Hitler.”….They thought maybe the newspaper could arrange this….  They found the loaded missile in a creek in Shannon’s Field on the edge of Fredericksburg….

The drive produced more than 463,000 pounds of scrap–more than 100 pounds per resident. Other than actress Greer Garson’s appearance in town for a war bond drive a few weeks later, it was by far the biggest war-related event in town during World War 2.

The sign for the old Chatham bridge, donated to subdue Hitler. The bridge had been replaced in 1941, rendering this sign superfluous. Courtesy Central Rappahannock Heritage Center.

4 thoughts on “A patriotic end for some cool history stuff: what happened to Jackson’s fence?”