From Hennessy (for Mac Wyckoff’s prior two posts about Kirkland, click here and here):

Before I plunge in, let me thank Mac Wyckoff for sharing his research. I also want to share with you his conclusion about the evidence he has presented on the Kirkland story. 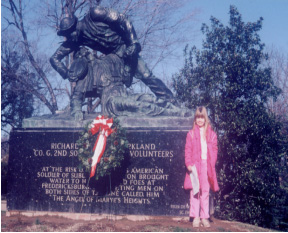 Mac's daughter Melinda in front of the Kirkland memorial on the 125th anniversary of the battle, in 1987.

“Historians constantly face the issue of what is factual. Unable to question and cross examine the deceased participants and witnesses of a historical event, we have to make decisions on whether the testimony is credible. In the case of the “Angel of Marye’s Heights,” there is overwhelming testimony, in both quantity and quality, that someone gave humanitarian aid to suffering Union soldiers in front of the stonewall at Fredericksburg. Although there may have been more than one person providing the aid, the only known name is that of Richard Rowland Kirkland of the 2nd South Carolina.  We will never know precisely what happened on that December day in Fredericksburg, but the evidence points to a remarkable event. Too many accounts exist for the story to be a fabrication.”

There is no question that cases like Kirkland present the NPS or any caretaker of history with an immense challenge. When a story or a place becomes a cultural icon–told and retold, interpreted and reinterpreted–it’s easy to lose track of what we really know and what we don’t know. It’s also easy to lose the distinction between the story itself and how that story has been used.  We have dealt with recent examples of this in this forum: the auction block in downtown Fredericksburg and Stonewall Jackson’s arm. But neither of those have the charged aura that surrounds Richard Kirkland. His is a case study that embodies evidence, memory, and the practice of public history (in this case, by an agency of the federal government). 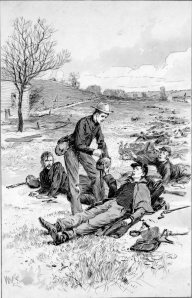 William Ludwell Sheppard's image of Kirkland at Fredericksburg. Many would follow.

Let’s start with the evidence. Some have postulated (see Michael Schaffner’s thoughtful post over at Civil War Memory) that the Kirkland story may have had its origins in a conscious post-war attempt to forge a specific and favorable view of the Confederate soldier and the war at large, i.e. the story is not the product of history and fact, but rather may be the product of memory–“the cultural, social, and political milieu of South Carolina in 1880.”  In light of that, what do we REALLY know, and what can we reasonably conclude?

–  We know there were wounded left on the field in front of the stonewall at Fredericksburg for most of two days after the battle (a 10-minute review of sources in the park’s collection produced several references beyond Whitman’s and Kershaw’s. Click here for some examples.)

–  We know that within six weeks of the battle, Walt Whitman recorded being told by a wounded Union soldier that as he lay between the lines, “several of the rebels, soldiers and others, came to him at one time and other” and that one “middle-aged man” moved about the field, “among the dead and wounded for benevolent purposes.” It is not clear if this particular Samaritan was a soldier or one of the “others” mentioned by Whitman.

–  We know that before his death in 1870, James Hagood wrote specifically of a soldier from Kershaw’s brigade going over the wall to assist Union wounded.

–  We know that in 1880, after being asked to identify a man from his brigade who went over the wall, Kershaw named Richard Kirkland, providing extensive additional details because, he said, his interaction with Kirkland that day was “indelibly impressed on my memory.”

–  We know that in the decades after Kershaw identified Kirkland, at least five members of the 2d South Carolina stepped forward to retell the story, by implication endorsing if not confirming it.

What we don’t know:

–  We can’t say that any of the Samaritans described by either Whitman or Hagood was Kirkland.

–  We cannot say whether those who stepped forward after Kershaw’s 1880 account were reinforcing or simply restating Kershaw’s account. With one exception—the story of Isaac Rentz, written by a friend in 1919—the post-Kershaw accounts offer few additional, distinguishing details that would allow us to speculate that the writer witnessed the event rather than simply read about it at Kershaw’s hands.

–  Though apparently prompted to record his (Kershaw’s) memories by a newspaper editor, Carlyle McKinley, who became known for his romantic, sentimental portrayals of the South (thank you Robert Mosher, a reader, for adding this to the record), we can’t document (beyond speculating) that or why Kershaw might have fabricated his story about Kirkland.

So is Kirkland a hero or a bandwagon?

I’d offer he is both. 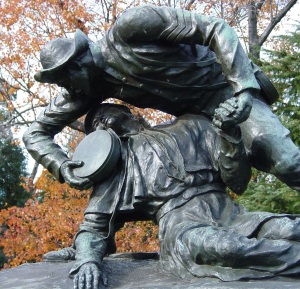 Having wrestled with some very tangled historical issues over the decades (rarely is any event or historical question framed in anything but mud), the progression of evidence in Kirkland’s case seems fairly straightforward. First, we know that one or more Confederates went over the wall to aid the Union wounded.  Second, we have been given the name of one of those men: Kirkland.  Is there really any basis for doubting Kershaw’s statement about this?  Why would we?  Certainly, if we’re using an evidentiary scale here, the evidence that would discredit Kershaw’s statement is far, far weaker than the evidence that suggests his statement about Kirkland is in its fundamentals (if not details) based in some fact.

It seems to me that in dealing with these things, it’s vital to distinguish the event (or story) itself from the way that story has been used. There is no doubt that Kirkland became a bandwagon, and there is no doubt that his story, as relayed by Kershaw, other veterans, later historians, and (especially!) artists (see here here here here here) became a stone in the foundation of the Lost Cause, used to demonstrate the virtue and humanity of the Confederate soldier (even, recently, to the point of reducing the battle itself to insignificance in some eyes). But, Kirkland’s status as a Lost Cause icon does not render his story untrue (just as the slave auction block’s imagined threat to Southern virtue has little to do with the evidence that speaks to its historic use). As Gary Gallagher points out, the Lost Cause endures because enough of it is based in fact to make it arguable (at least to some). 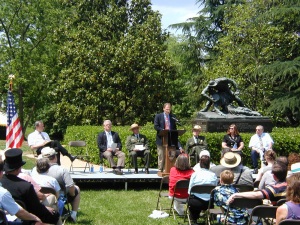 With the Kirkland Memorial as a backdrop, Historian George Rable speaks at the 2005 dedication of the restored Sunken Road.

Let’s pass the Kirkland legend and monument to the realm of public history. It’s a classic case of public historians being buffeted on one side by the emerging and growing historical record and on the other by the force of tradition. What do we do with it? In fact, historians at the park for years have been acutely aware of the vagaries embodied by the source material. While we largely accept the essentials of the Kirkland story, we are also quick to discuss the uncertainties that surround it and, significantly, the cultural values that have overlain it—the use of the story for cultural, political, and social ends. (Michael Schaffner’s piece at Civil War Memory is a highly useful cautionary note on this account). And know too that if evidence emerges that disproves the Kirkland story, we’ll lead the way in shifting our interpretation away from the event itself and to the creation and use of the story as a stimulus for postwar reconciliation and sustenance of a Southern identity.

But the evidentiary standard for demolishing legend must necessarily be high. With Richard Kirkland, that standard has not been met. The story is due careful handling and a great deal of context, but not (at least now) outright reconsideration. And, for the diligent one of you who might some day turn up a body of evidence that forces a reconsideration or rejection of the story, bear in mind that a greater understanding of history does not always portend the revision of memory (as those of us in the history business have learned the hard way).

9 thoughts on “Kirkland– a hero or bandwagon? Evidence, memory, and public history”