[We are very happy to welcome Donald Pfanz to Mysteries and Conundrums. The following is the product of his extensive work on the creation of the National Cemetery, which we’ll soon be publishing as part of our publication series. ]

Skeletons in the Wilderness. Scenes like this stimulated the Federal government to take action, and so they dispatched a regiment to accord the dead proper burial.

In June 1865, in response to clamorous complaints about the dead left unburied on the battlefields around Fredericksburg, the Federal government dispatched the 1st U.S. Veteran Volunteers to undertake reburial of the bodies. The 1st Volunteers reached Fredericksburg late on the afternoon of June 10 and pitched its tents on the south side of the Rappahannock River.  Some wandered the streets of the shell-torn town; others walked across the plain leading to Marye’s Heights, where Union arms had suffered defeat on December 13, 1862.  Unlike the Union soldiers who had perished in the Wilderness and at Spotsylvania Court House, most of those who had died at Fredericksburg had been buried immediately after the battle.  William Landon, who had fought at Fredericksburg as a member of the 14th Indiana Infantry, took the opportunity to search the town for the graves of comrades who had fallen there.  He found but one:  Corporal John E. Hutchins of Company B, the “Old Post Guards.”

Landon and his comrades resumed their march the next morning, heading west along one of two roads:  the Orange Turnpike or the Orange Plank Road.  By noon, the First Regiment reached Chancellorsville.  The charred remains of the Chancellor house and the scattered remnants of blankets, knapsacks, and other equipment bore silent witness to the fierce struggle that had been waged there.  Passing on, the regiment reached the Wilderness Battlefield late that afternoon.  The soldiers bivouacked on the northern end of the battlefield at an abandoned goldmine– possibly the Woodville Mine.  No sooner had they arrived than “a crowd of half-starved women and children” and a few men in Confederate uniform flooded into the camp, hoping to trade garden vegetables for food that the soldiers carried in their wagons.  “All the rations we could spare were freely given them,” wrote Landon, but the demand far exceeded the supply and many went away hungry.

Wilderness Cemetery #1, created June 1865, and in existence for just over one year. Brevet Major Moore enclosed Wilderness National Cemetery No. 1 with a simple board fence. Each of the headboards visible in the photograph appears to read: "Uknown U.S. Soldiers Killed May 1864"

The First Regiment began collecting skeletons on June 12. Starting at the northern end of the battlefield, the soldiers slowly worked their way south through “woods, thickets, fields, and swamps,” searching for human remains. After going a certain distance, they would halt, change direction, then move forward again, marking the graves of those who had been properly interred and gathering up the remains of those who had not. One out of every four men carried a sack to hold the bones. Skeletons that lay in marshy ground had not fully decomposed. Too offensive to handle, they had to be buried where they lay.  Although required to bury only the Union dead, Moore and Bird took it upon themselves to inter Confederates whom they found too, a task that nearly doubled their workload. 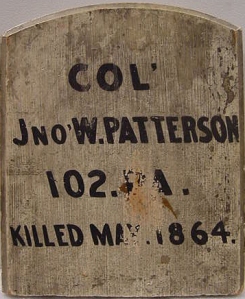 The only known surviving headboard from the 1865 burial operations. The Patterson headboard is now on display at Chancellorsville Visitor Center.

Soldiers whose graves could be identified received a simple headboard. Such was the case of John W. Patterson, colonel of the 102nd Pennsylvania Volunteers, who had died on May 5, 1864. Patterson’s men had committed his body to the ground and marked his grave with whatever wood happened to be available at the time. When Bird’s men found Patterson’s grave, more than a year later, they replaced the rough headboard with a tablet of their own. Patterson’s family later recovered his body and took the tablet home with them as a relic of his death. Today it is the only artifact of its type in existence.

Patterson was more fortunate than most. Few soldiers had been buried, and fewer still had boards identifying their graves. “It was impossible to identify any of the bodies found unburied,” insisted Bird, “they having been exposed [for] more than a year all traces of identification having been destroyed….” Skeletons in the Wilderness. Moore and his burial party discovered hundreds of soldier remains in the Wilderness. Those that had been buried they simply marked with a new headboard.

In three days of hunting, the First Regiment collected thousands of bones and “a huge pile of grinning, ghastly skulls.” To hold the remains, the soldiers constructed a cemetery south of the Orange Turnpike, near the western edge of Saunders Field. The graveyard was sixty feet square and enclosed by a whitewashed fence made of horizontal planking. On one of the fence posts workers nailed a board identifying the graveyard as “Wilderness National Cemetery No. 1.”

The fence surrounding Wilderness Cemetery #1 is visible at this 1866 image looking west across Saunders Field.

The First Regiment buried the dead in mass graves.  Landon recalled placing ten skulls in each coffin and filling the rest of the container with bones.  Once full, soldiers screwed lids onto the wooden boxes and a “Corporal’s Guard” lowered them into the ground, its occupants “unknown, but not unhonored nor unsung.”  By Landon’s count, his regiment buried 35 coffins in this fashion, totaling 350 interments.  However, his figure may be high.  Bird reported burying 180 men in Wilderness National Cemetery  No. 1, while Moore—perhaps erroneously—set the figure at just 108.

The men of the First Regiment arranged the graves in neat, orderly rows.  Over each one they erected a white wooden tablet with black lettering. Like those they erected elsewhere on the battlefield, the tablets were approximately ten inches wide and one and one-half inches thick.  They extended three feet above the ground and had gently rounded tops.

In 1866, the Federal government created the National Cemetery at Fredericksburg, and the men buried at both Wilderness Cemetery #1 and Cemetery #2 were moved there. Today not a hint or trace of the cemetery that once sat on the western edge of Saunders Field is evident.

2 thoughts on “The Bone Collectors: Creation of Wilderness Cemetery #1”