Part 1 can be read here.

Joseph Hooker had ordered the creation of the Bureau of Military Information under Colonel George H. Sharpe. Even after Hooker’s removal from command of the Army of the Potomac, Sharpe stayed on as the head of the bureau and Isaac Silver continued to work for it.

Not much is known about Silver’s activities during the period between the Battle of Chancellorsville and the spring of 1864. He must certainly have been working for Sharpe, as his neighbor Ebenezer McGee is known to have acted as a guide for the Army of the Potomac during the Mine Run campaign in November and the Ulric Dahlgren Raid in March. McGee is reported to have been killed during the latter operation.

Monument at the site of Ebeneezer McGee's Spotsylvania home.

The spring offensive brought the Union army once again into Silver’s backyard. In a postwar deposition, Silver claimed that he was “a guide for Gen. Sheridan at the time of the battle of Spottsylvania Court House in May 1864. He was at my house.”

On the night of May 8, 1864, Union Major General Philip Sheridan gathered his cavalry divisions around Isaac’s farm on Orange Plank Road. While the armies were engaged at Spotsylvania Court House, Sheridan prepared for his ride to Richmond. In a dispatch sent that afternoon, Captain Edwin B. Parsons informed army headquarters that “Major-General Sheridan’s headquarters will be at Silver’s to-night, on the plank road to Fredericksburg and Spotsylvania.” The following morning the Union cavalry mounted up and began its ride that resulted in the Battle of Yellow Tavern and the mortal wounding of Confederate cavalry chieftain Major General J.E.B. Stuart.

As the armies moved south, Silver continued to provide information on Confederate activities in central Virginia. Amazingly, went undetected for almost three years before Confederate authorities finally caught up with him. In late January 1865, Silver, along with Fredericksburg resident John B. Timberlake and Richmond, Fredericksburg & Potomac Railroad Superintendent Samuel Ruth were rounded up. The charge against the three was treason against the Confederate States, specifically “carrying information to the enemy.” The prisoners were placed in Castle Thunder in Richmond.

Confederate authorities released Ruth and Timberlake a month later, acknowledging a lack of sufficient evidence to hold them. The case against Silver must have been stronger, as he was shipped to the prison camp in Salisbury, North Carolina. He presumably sat out the few remaining weeks of the war at that place and returned home following the Confederate surrender.

It is interesting to ponder Silver’s return home. His cover had been blown and his arrest and charges were written up in the Richmond newspaper. His wartime activities must have certainly been a topic of conversation among his neighbors and the local community. By 1870, however, Isaac, his wife Catherine and their six children moved across the Rappahannock River to Stafford County.

Isaac Silver’s contributions to the Union war effort and strategy in central Virginia should not be overlooked. He and his operatives supplied important and timely reports to the Army of the Potomac. It might even be said that Isaac Silver, albeit a Unionist, was quite possibly the most influential man in Spotsylvania County during the war. It is no exaggeration to say that Silver’s information proved instrumental in developing Hooker’s strategy for the Chancellorsville Campaign. His overall correct identification of Confederate units and their locations ensured an early Union success, which of course fell apart once contact between the two armies was made.

Isaac Silver passed away on Christmas Eve 1901. He was 91 years old. In reporting his death, the Fredericksburg newspaper described him as “a prosperous farmer and during the war of 1861 and ’65 was conspicuous for his fidelity to the cause of the Union.” His wife, Catherine, followed him to the grave in 1908. 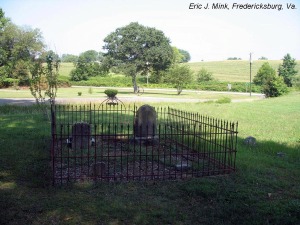 The graves of Isaac and Catherine Silver - Tabernacle Church Cemetery, Stafford County. The open ground in the distance is Silver Ridge Farms, which is still farmed by the Silvers.

The house that Silver owned and lived in during the Civil War still stands in Spotsylvania County, barely.

It is in worse than poor shape and beyond help. The end chimney has fallen into a rubble pile. The back porch has also collapsed, taking a good portion of the north façade with it. Holes in the roof are expansive and vegetation covers the building. Overall, the structure is a danger to be in or near. Within this now dilapidated and unstable structure, Issac and Ebenezer McGee likely planed scouting missions, sifted through gathered information, and wrote their reports to Colonel Sharpe.

The Silver House is private property and well posted with no trespassing signs. Please respect the owners’ rights and privacy and do not enter the grounds without prior permission.

* One small side note. Silver’s brother-in-law, Robert Orrock, Jr., of Hungary Station, Henrico County, Virginia, was also on Colonel Sharpe’s payroll. In fact, it was on his farm that Richmond Unionists buried the remains of Captain Ulric Dahlgren, following his disastrous March 1864 raid on Richmond.

Information and access to resources was provided by Mike Silver and D.P. Newton of Stafford County, and Dr. Art Tracy of Spotsylvania County.

16 thoughts on ““I was in the Secret Service of the Army of the Potomac…” – Isaac Silver of Spotsylvania County, Part 2”