On this the 148th Anniversary of the bombardment of Fredericksburg, I thought it might be timely to revisit a post we did back in April on battle damage in town.

Today, few visible examples of external battle damage survive in Fredericksburg.  I am aware of only a few buildings that show it, and then only subtly.  It’s a different story on the interior of buildings in town.  Probably dozens still bear scars, and many owners consciously preserve the evidence of battle.  The Baptist Church has spectacular damage in its steeple; the courthouse bears scars, as does the Rising Sun tavern–both in their roof structures.  One of our hopes is to do a photographic inventory of all the battle damage in town, and perhaps even some online videos that document some of it.  More on that another day. 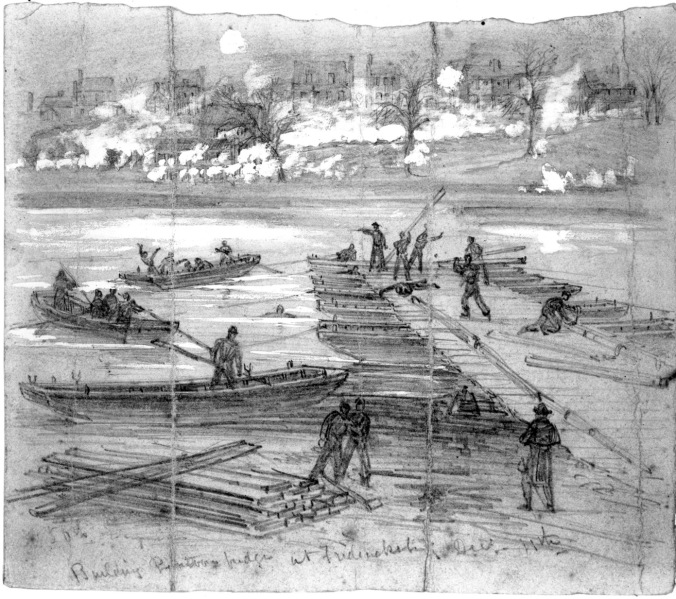 The upper pontoon crossing, below Chatham--at the base of Hawke Street.

At the height of the Union bombardment on December 11, as many as 100 shells a minute exploded over town (so says E.P. Alexander).  It’s likely virtually every building in town suffered some damage.  A search of tax records indicates about 100 taxable buildings were either destroyed or so heavily damaged that they had to be pulled down–about 10% of the town.  Bear in mind that not all these buildings were destroyed by Union fire.  The Confederates fired into town too over the next four days; I would estimate that about one-quarter of the town’s damage came from Confederate guns, and on the outskirts of town, below Marye’s Heights, the vast majority of damage came from the Confederates, as Russ Smith pointed out in the discussion of the Sandy Bottom image the other day.

Accounts of the destruction are vivid, but in fact photographers who came to the town in 1863 and 1864 recorded few images intended to document it specifically.  Four images are known, including three images taken on lower Caroline Street–one of which I include here (this is of 136-138 Caroline, which still stands in one of the most desirable neighborhoods in town). 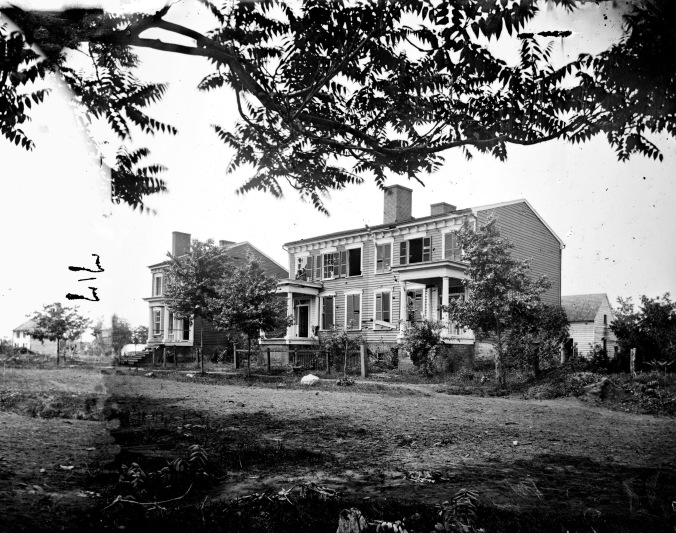 Despite the photographers’ inattention to battle-damaged buildings, a close look at some of the many panoramic images begins to hint at the extent of the destruction in Fredericksburg.  Take, for example, this blow-up from the now-familiar panorama taken from just below the ruined railroad bridge. 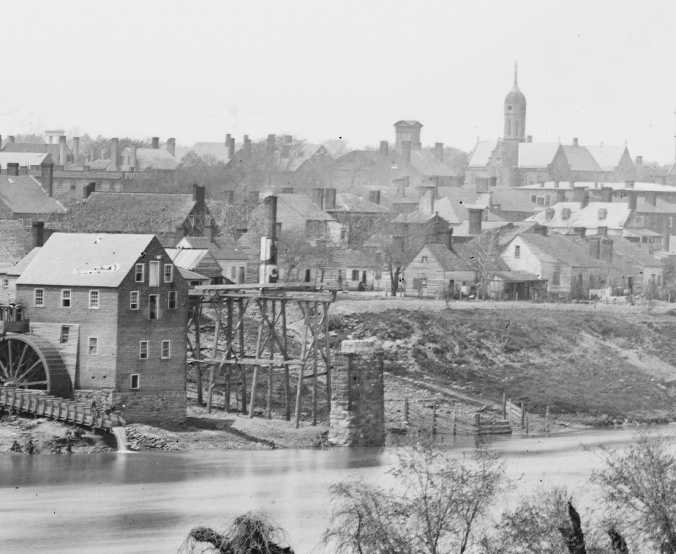 There, just above the dangling terminus of the railroad bridge, is a lonely chimney, the remnant of what had been a rental property owned by John L. Marye (exactly who lived in the house we cannot determine).

The heaviest damage was concentrated upstream from the railroad bridge.    It was at the upper pontoon crossing, at least initially, that Union gunners focused their fire.  As the town became obscured by smoke, Union gunners tended to simply fire into the center of town, for it was there–in the 1000 and 1100 block of Caroline Street–that tax records show the heaviest concentration of buildings was lost.  Here is a map I have put together showing the density of destruction in the upper half of town (red markers indicate a building that burned; green markers indicate those that had to be pulled down due to damage).  Elsewhere in town the loss of buildings is much more scattered, and so I have cropped the map for easier reading.

Note the cluster of lost buildings in the heart of town, above the Chatham Bridge.  Much of the 1000 and 1100 block of Caroline was destroyed.  A single purposeful photograph of the damage survives.  It shows the ruins of the Bank of Virginia, which stood at the corner of Caroline and William, as well as two buildings around it. 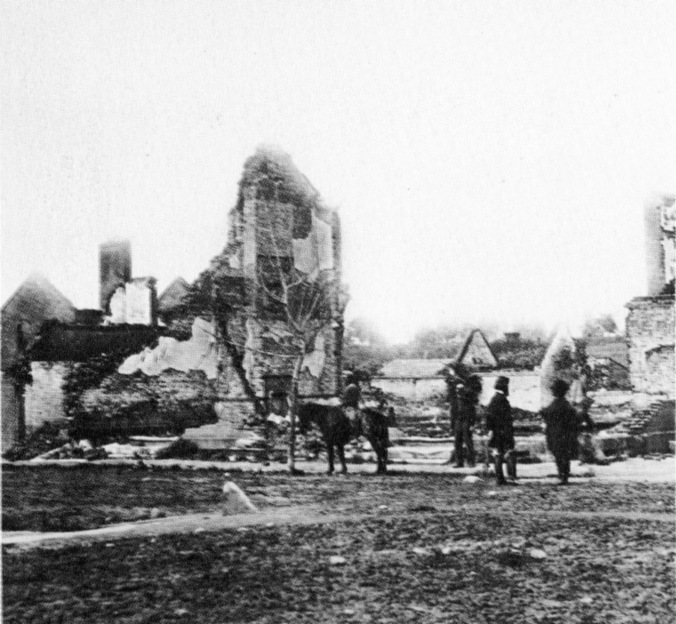 A bit farther north, in 1863, a Union photographer intent on photographing the upper pontoon crossing captured–probably without knowing it–the most vivid images of damage in town.  (Noel Harrison will have much more to say about a companion view of this image in the next few days.)  Include the full image below–if you want to explore a a hi-res version of this yourself, find it here. 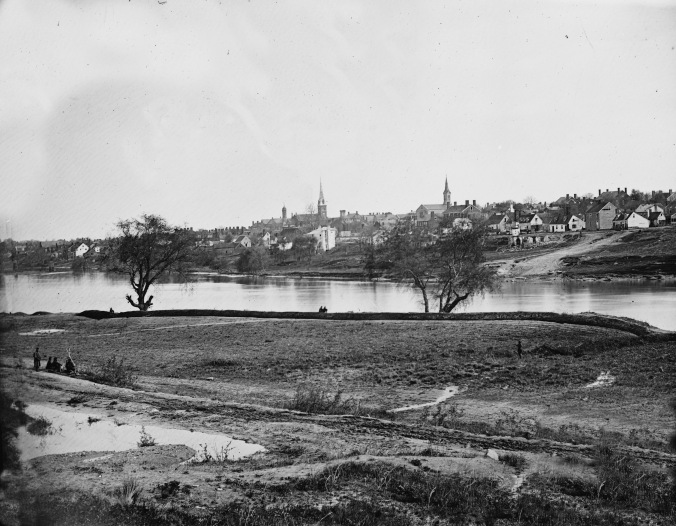 A blowup reveals vividly the toll the artillery bombardment took on this section of Sophia Street–just opposite the upper pontoon crossing. 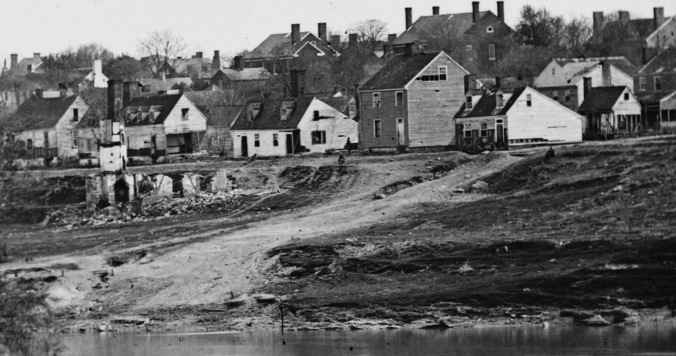 Most obvious is the remnant chimney of the Scott House, completely destroyed during the bombardment. Beyond that, virtually every building in the view bears heavy damage.  More than that, note that most have clapboards stripped away.  Several residents complained during the winter following the battle that Confederate soldiers took what they needed from damaged buildings to enhance their own comfort.  It’s likely the stripped clapboards are a result of that (the damage done by the Confederates during their occupation of town was extensive and is a topic worthy of further study).  Of the Sophia Street buildings in this view, only one survives today–the Hancock House, the darker two-story building just to the right of center.

Finally, another detail from this panorama. 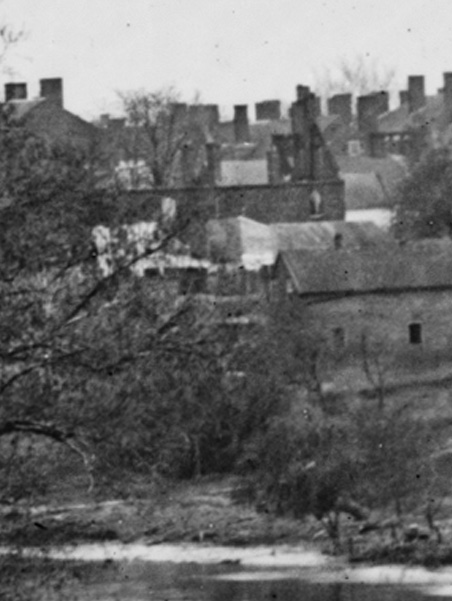 It shows the burned-out shell of a large building on Caroline Street.

While the damage to Fredericksburg was extensive, it was by no means a ruined town, as some claimed at the time.  Evidence of that fact is the high percentage of wartime buildings that still line downtown’s streets, making for one of the best-preserved and healthiest historic downtowns in the east.  Still, the town’s experience from December 11-December 15, 1862, remains the central event of  its existence–the event that bifurcates its history.  In Fredericksburg, it either happened before the war or after the war, and no one needs to ask which war you’re talking about.