By John Hennessy and Eric Mink (note: for a rigorous analysis of some of the historic images included here, see John Kelley’s article, “Hidden in Plain Sight: The First Photographs of the Gettysburg Campaign.”)

This image clearly shows the roads heading up the ridgeline. They cannot be seen today, but their locations can be determined.

Last week we had the unprecedented opportunity–thanks to the folks at Spotsylvania County–to explore the Spotsylvania side of Franklin’s Crossing (often called the Lower Crossing because of the three Union crossings at the Battle of Fredericksburg, it was the farthest downstream). It was here, in December 1862, that the left wing of the Union army (commanded by William B. Franklin) crossed the Rappahannock on its way into battle. Likewise, in May 1863 and June 1863 Union troops crossed at this site. In fact, the Union army built a system of pontoons here again in May 1865 too, for the passage of the Union army as it headed back to Washington for the Grand Review. This was a busy, important place.

Another 1863 view, looking slightly downstream in the direction of Mannsfield.

It’s always exciting to see something you have never seen before; it is doubly so to see something few people have explored before. The site is behind the Bowman Center–an industrial area–off Route 2/17, about a mile south of Fredericksburg. From the land side, the site is completely inaccessible to the public. We gained access by the graces of Spotsylvania County, which operates a sewage treatment plant that is tightly fenced. It helped greatly that we had county staff along with us, else we doubt they would have let us through.

We reached the site by walking along a fairly narrow path between a fence and the veritable cliffs–probably 65 feet high, virtually straight down–that border the river just west of the crossing.  Please accept our apologies that the site is heavily wooded today and difficult to photograph.

The view toward the crossing from the cliff’s end. Looking east. Photo by Eric Mink.

Our first revelation was that it was clearly the topography on the Spotsylvania side of the river that determined where the crossing site would be, and indeed there is no doubting the location on the ground today. Following the riverside cliff, we came to a place where suddenly the cliffs yield to a bowl–the high ground pulls away from the river, leaving a relatively flat space with substantial but passable slopes to the upland.  This bowl is clearly visible in the wartime photographs. 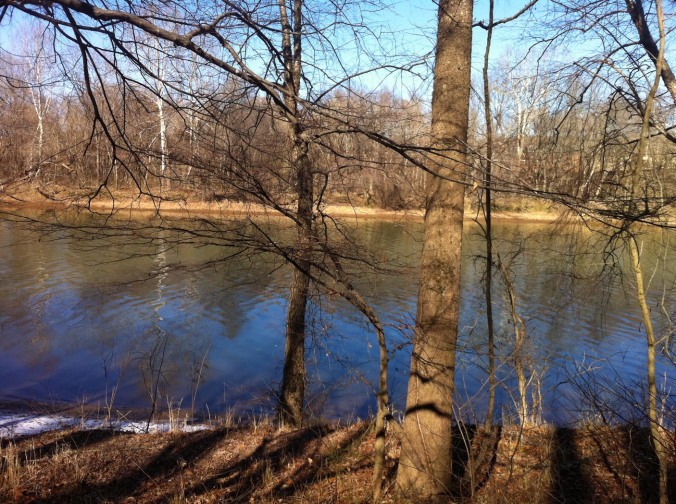 We had hoped, of course, to find physical evidence of the crossing site–some remnant of the roads and ramps built by the Union engineers. Nothing recognizable remains. But, the topography of the lower crossing seems largely intact, save for a few anomalies and some washes created by drainage systems emerging from the industrial area on the upland above the site. 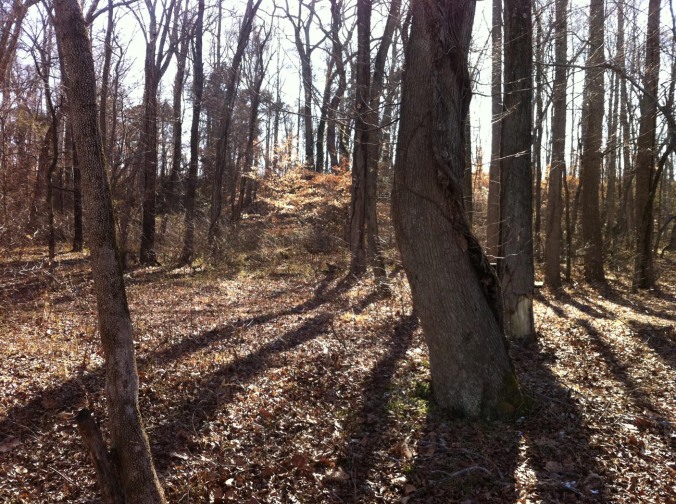 Looking upland from the crossing site. The ridgeline is barely visible through the trees. Photo by Eric Mink.

While the absence of any evidence of the literal crossing site was disappointing, the topography still allowed us to precisely determine the location of the bridges visible in the 1863 photos. There are two features that matter.  The first, already mentioned, is the cliff-end mentioned above. This feature is off the right edge of the wartime images, but was a clear indicator that we had found the crossing site at large. Second, and far more important, is a low shelf in the riverside ridge that marks the beginning of a second, broader bowl just downstream of the crossing site. 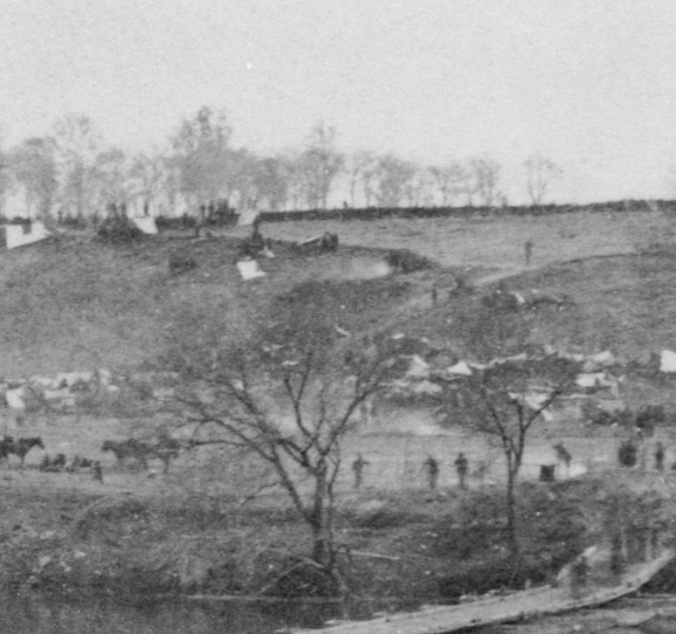 The ledge or shelf is in the center of this image.

This shelf is visible in the historic images and is easily found today, and by locating it we were able to locate precisely the location of the lower bridge visible in the images.

A couple of final notes. Comparing the photographs with Alfred Waud’s sketch of the December 1862 crossing, it seems clear that the third bridge present in 1862 stood downstream from the two photographed in 1863; the other two appear to be in the same location.

Compare the pattern of trees in this view with those in the photographs, and it becomes apparent that the third bridge in December 1862 sat below the two visible in the images.

We hope to get down to the crossing site on the Stafford side soon.  We’ll certainly share whatever we find.

And finally, we are working with Spotsylvania County to see if there is any way for us to do a tour to the site this spring. We certainly cannot get in there the way we went last week, but perhaps there is another way.  We’re working on it and will keep you posted.