It is both a source of confusion and obscure–Katherine Couse’s home, Laurel Hill. It is often confused with the Laurel Hill area of the Spotsylvania Court House Battlefield, where the Union Fifth Corps opened the battle on May 8, 1864. In fact, Couse’s “Laurel Hill” stood 1.75 miles northwest of the Bloody Angle, off what is today known as Gordon Road. That the house is obscure is perhaps rooted in its confused identity–it could not be because it is unknown, for in fact there are few homes on the Spotsylvania Battlefield better and more vividly documented than Laurel Hill.

The Fifth Corps hospital at Laurel Hill, by Edwin Forbes. Kate Couse recorded that Forbes ate dinner at her house on May 12, the date of this image.

Unionists lived at Laurel Hill–indeed, a cluster of Unionists surrounded Laurel Hill in this part of Spotsylvania County. William and Elizabeth Couse moved to Laurel Hill in 1840 from New Jersey, along with their family of seven children. With more than 1,400 acres of land and a robust saw mill, the family did well, until war came to the neighborhood. In March of 1862, son Peter Couse was arrested by Confederate authorities on suspicion of disloyalty, imprisoned in Richmond, and once released returned north. That left Laurel Hill in the hands of three Couse sisters: Cornelia, Sarah, and 28 year-old Katherine, or Kate. The three women and the farm suffered in the presence of armies.  Katherine remembered in May 1864, 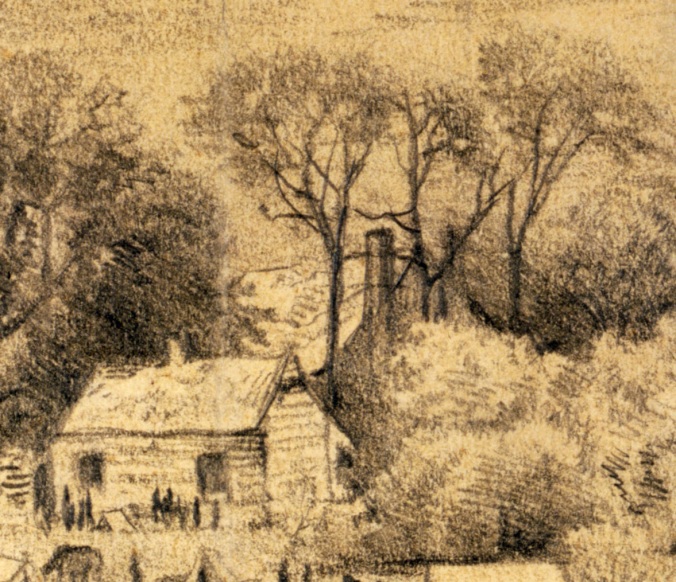 Forbes's sketch is the only known image of Laurel Hill.

There is no encouragement here to try to do anything. Last spring & summer [1863] nearly all our fowls were stolen at different times. Meat very scarce and high we had to buy them at extravagant prices. We raised sweet potatoes and watermelons but enjoyed none of the benefits. They disappeared soon as fit for use. This winter some hungry rogues stole part of our small supply of meat out the cellar w[h]ich we were at much trouble and expense to get in the fall. Not long since our last horse was stolen from us. It is too bad. Horses like every thing else in Dix are so scarce and high we do not think of trying to get another. I have felt for a long time that we have had just as much of the disagreeables of this life as we well could.

After occasional annoyance and discouragement in 1862 and 1863, the war visited with destructive might in 1864. During the Battle of Spotsylvania Court House, the Union Fifth Corps established its primary field hospital at Laurel Hill, and soon the place was flooded with wounded, wagons,soldiers, and surgeons.  So it was on May 12, when fighting raged just over a mile to the south, along the Muleshoe Salient. It was the heaviest sustained fighting of the war, and in a letter to friends, Katherine Couse wrote of it in real time, surrounded by neighbors taking refuge.

[Note:  the Rowe (properly Row) family referred to here is that of “Greenfield,” the subject of a post over at Fredericksburg Remembered. Click here to read about the place and the exodus of the family’s slaves in 1862.]

The fighting opens early this morning. The Rowe family came down just now, refugees  old Mrs. Frazer and Mrs. Long  have jus come through the rain, coming for protection. I feel sorry for them. Oh, God there is now the most murderous battle raging   the continuous roar of cannon  the still more terriffic musketry sounds awful indeed…. My feelings are intensely awful beyond description  this fearful bloody struggle….

The whole air resounds with the continuous roars, the earth shakes  Great God how more than awful—shells whizzing oh so fearfully my very soul almost dies within me. The sound of the cannon echoes through the air and sounds as if vollys had opened on the opposite side from where they are fighting. The sound of firearms now becomes more distant, nearly 11. Mrs Long and Frazer have just started home, through the rain. Miss Aphia wandering through the house  pop–it sounded as if the very earth was breaking up from the direction of Capt. Browns old place in one continuous line to Miss Rett Pritchetts the drums are beating  bands at intervals  the poor wounded heroes are now coming in ambulances. They stand with stretchers to remove them to the tents, on the amputation tables. I can see them lying stretched out redy to be operated on. Mr Forbes—the artist scetcher for Frank Leslie calls in out of the rain  his right arm is helpless he scetches with his left hand, has not the use of all his fingers on that hand. The house is perfectly mudy and hogish  tracked all up, with refugees, children, dogs and soldiers. The surgeons are busy  4 o’clock the battle still raging and the bands play at the same time  the roar of cannon  music from the band make me feel sad. Hear cannon out towards H Alsops.

We had Dr Little, the Rowe family, and old Miss Phia Gatewood here for breakfast. We do not try to get dinner, very heavy cannonading in the direction of Miss Rett’s. Gen Patrick called this afternoon he remembered A. and our family we were delighted to see him. Dr Dewitt called also  splendid looking middle aged looking man  partly cleared off this afternoon  the refugee children black and white are such nuisances  we are over run with them. Mr Clark took supper with us to night, also have seve[ral] newspaper reporters. Last night and to night the Hall sitting room and parlor all have occupants, some up stairs. Dr H[oward] and a good many other calls. The poor dead pass on the stretchers occasionally  they are buried all around us. Hear a good deal of musketry firing late to night  bad weather  the Feds claim success.

We’ll have more to say about the Couses and their Unionist neighbors in future posts.  For those of you interested in Katherine Couse’s 1864 letter (the text of which you can find here), former park employee Elizabeth Getz Carmichael did an outstanding job editing and annotating it for the inaugural CVBT Journal, Fredericksburg History and Biography, in 2002. You can find every volume of the journal for sale here.

7 thoughts on “Echoes from the Bloody Angle: a real-time description from Katherine Couse’s Laurel Hill”