We love nothing better than to resolve mysteries here, but sometimes, despite our best efforts, mysteries persist. Take these two photographs. Both are credited to army photographer Andrew Russell, said to be taken May 2 and May 3, 1863.

The other is labeled, “First Connecticut Battery near Fredericksburg, May 2, 1863,” which we will henceforth refer to as #2:

A few things right up front.  Most importantly, these images are not of the “First Connecticut Artillery” or “A Battery of 32-pounders.” The guns visible in both images are 12-pounder light field guns, Napoleons. The only two Connecticut artillery batteries in the Army of the Potomac in the spring of 1863 were armed with 4.5-inch guns, not the field guns shown here. Clearly, the labels are wrong in that respect.

We do know that these photos were taken by Russell, who took a number of important images in the vicinity of Franklin’s Crossing (the Lower Crossing) during the Chancellorsville Campaign (see here for an exploration of another one), including some that were taken on May 2 and May 3. But, circumstances (bolstered by what I think are some valid assumptions) suggest that these at least one of these images was taken a couple of days earlier. The clues are in the details.

Of the two, Image #1 is the most enigmatic. It’s a terrific view, but there seems to be little in the image to suggest to us a location or a moment in time. It shows a battery of Napoleons fully deployed, with limbers and caissons properly aligned behind them.  Here’s a close-up of the gun nearest the camera. 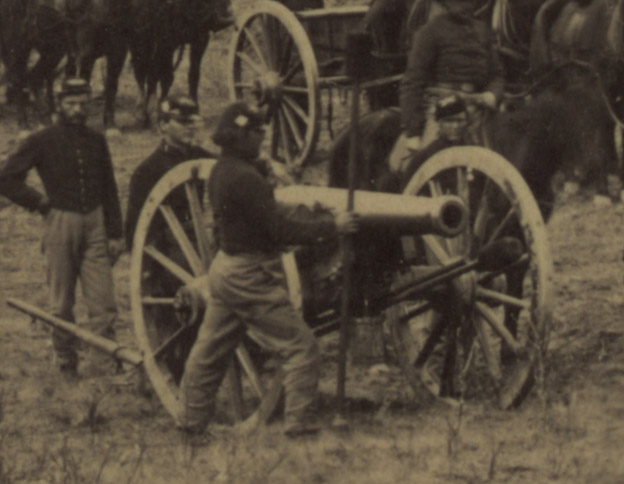 Notice something about several of the men in this enlargement (and elsewhere in the image). On the right side of their kepis is a corps badge–the diamond of the Union Third Corps. Moreover, it appears to be a WHITE diamond, which would indicate the Second Division. That matters, because, assuming that the image’s connection with Russell and his work in late April or early May is accurate, this reduces the number of possible subjects to just three batteries, all of them armed with Napoleons, and all of which departed the Franklin’s Crossing area about 3 p.m. on April 30.  Up to that time, they were positioned “near the bank of the Rappahannock, about midway between the crossings of Sedgwick [at Franklin’s Crossing] and Reynolds’ Corps [at and below Pollock’s Mill].”

Unfortunately there is little in the background to suggest a location for this image. A house does appear faintly on the distant horizon, and while coupling the known location of these batteries with nearby houses offers some possibilities, we can conclude nothing.

If the supposition is correct–that this image was taken of one of three Third Corps batteries before they departed to join the main army at Chancellorsville on April 30–then all we can really conclude of this image is that it was taken a couple of days earlier than presumed. Beyond that, we still have work to do. You can download and explore a hi-res version of this yourself here.

Image #2 is one of the better images ever taken of a Civil War battery unlimbered and in position, though as with most such photographs, the men in the image are clearly aware that their picture is being taken. Details abound. (Download a hi-res version for yourself here.) 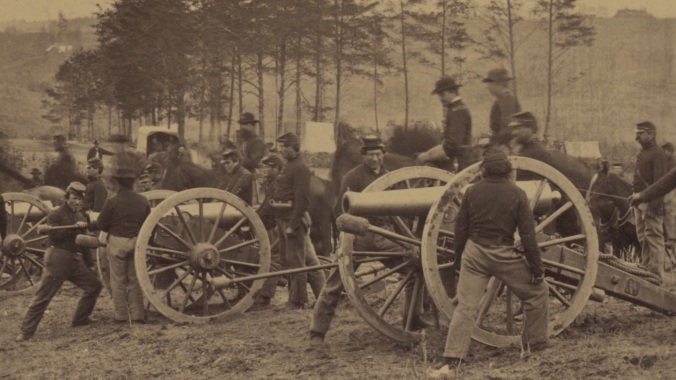 UPDATE and CORRECTION: As Todd and Stu point out in the comments, upon closer inspection these are NOT corps badges, but rather the artillery’s crossed-cannon insignia with regiment or company designation above it.

Farther down the line, other men wear the insignia in the same way:

We cannot, therefore, identify the battery in the view.  We know that Union artillery covered the Lower Crossing in great numbers. We know too that several batteries of Napoleons deployed on the high ground between the Lower Crossing and Pollock’s Mill–with even more farther downstream than that (all of these from the Union First Corps). If indeed this image is taken on Stafford Heights, then we do know this: the camera faces nominally north–the guns presumably face across the river to the left.

The background of this image is rich with detail. There are two seemingly permanent camps visible–one toward the left, and another on the right edge. On the horizon are a few features that beg identification or explanation.

At left in this enlargement (above) is what appears to be a sizeable lunette.  To the right is an odd structure with a tree either within it or behind it.

A little farther to the right is this strange structure (below), to the left of the mid-sized trees: 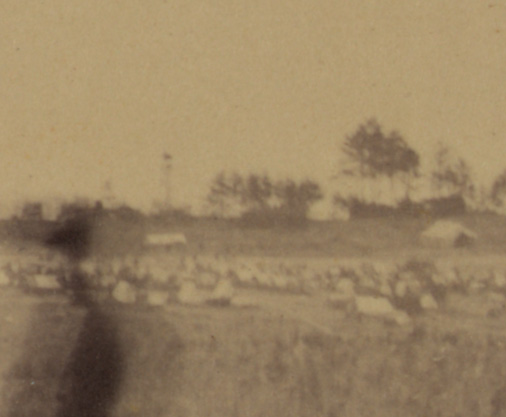 It almost looks like a tower of sorts, though in all my travels through source material related to the winter encampment, I have never seen reference to any signal or observation towers being built.

Everything in the image suggests this battery is in position on Stafford Heights–the encampments, the topography (including the ground that appears to start down on the left edge of image #2). But based on the information available, I cannot suggest a definitive location for either of these images, beyond the high ground south of the Lower Crossing and north of Pollock’s Mill, but even that cannot be offered with certainty. But, we do know that neither of these images is of a a battery of 32-pounders or a battery from Connecticut.  We know one is from the Second Corps, one from the Third.  And if indeed the images are associated with the movement of the army to the Lower Crossing, we can narrow the date on at least image #1 to before 3 p.m. on April 30.  We can divine too that the foliage seems to match other images known to be taken during this period.

But beyond those things, the mysteries remain.  So, here is one for you.  Take a look, explore. Maybe you will spot something or think of something I have missed.