commemorate. At the Fredericksburg & Spotsylvania National Military Park (FRSP), perhaps there is no one place within the park where that memorialization is more evident than in the Fredericksburg National Cemetery. On this Memorial Day, we thought we’d share with you an event that for many on the park staff brought home this notion of stewardship of the battlefields and the memory of the men who fell upon them.

On September 18, 2003, Hurricane Isabel came ashore in North Carolina, passed through Virginia, and left a path of destruction in its wake. FRSP was hit hard by the heavy winds and rain. Fortunately, the historic buildings, such as Chatham and Ellwood, escaped with only very minor wind damage. Most of Isabel’s impact was felt in over a thousand downed and uprooted trees throughout the park.

In the Fredericksburg National Cemetery, a large tree blew down and the root throw opened a three-foot deep hole over Graves #1650 and #1651.

Park staff was unsure whether the burials in those graves had been disturbed. We called our National Park Service archaeologists. Fredericksburg was not the only park dealing with potential disturbance of archaeological sites, as the regional support office fielded calls from many parks in Virginia and North Carolina. Since no human bones were visible at the two graves, park staff was instructed to use hoses to wash the dirt off the tree’s root mass, thus exposing any bones, if they were present. If bones were discovered, we were to stop and immediately call the archaeologist and he would drive down from Philadelphia as soon as he could.

The process of examining the root mass began with sweeping a metal detector over thecompacted earth and roots. Six large (3”) cut nails and one unidentified iron fragment were found. If the remains of the two soldiers had been interred in coffins or boxes, the nails suggested that the burials had indeed been disturbed.

Washing a root mass, compacted with rocky Virginia clay, using a garden hose is not an easy task. As the day wore on, we began shaking the roots to help loosen the clay. I reached for a root, shook it and immediately realized I was not holding something made of wood. I was holding  a tibia, a bone that forms part of the human leg. All work immediately stopped. A call was placed to Philadelphia and our regional archaeologist said he would be at the cemetery the following day.

When the archaeologist arrived, a closer examination of the root mass revealed not only more bones, but an intact leather shoe. It became 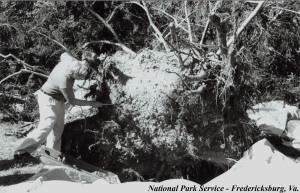 obvious that as the tree had grown, its root system intruded into Grave #1650 and wrapped itself around the occupant’s leg. When the tree blew over, the leg and foot came up with the root throw. Further examination and removal of the roots and dirt failed to reveal any more of the soldier’s remains. No bones or human remains were found in the dirt and roots above Grave #1651.

The soldier whose remains occupy Grave #1650 was Private James Clarey of the 57th New York Infantry. Private Clarey enlisted in August 1861 at Poughkeepsie, New York. He was 32-years old at the time of his enlistment. On December 11, 1862, while his regiment protected Union engineers constructing the Upper Pontoon Crossing opposite Fredericksburg, he was killed by Confederate fire from the opposite shore. His body was initially buried on the Phillips Farm in Stafford County, but after the war he was disinterred and reburied in the Fredericksburg National Cemetery. Private Clarey left behind a wife and family in New York.

After it was determined that all of the bones and artifacts had been collected from the root ball of the downed tree, park staff decided that they should be reburied in the grave as soon as possible. The park’s

restoration specialist built a small pine box, into which all of the bones and artifacts were placed. On the evening of September 25, members of the park staff, along with a few invited park friends and neighbors, held a small ceremony for Private Clarey. A color guard from American Legion Post #320 preceded four members of the park staff, carrying the small casket, up the terraced slope of the cemetery to Private Clarey’s grave. Chief Historian John Hennessy, Supervisory Law Enforcement Ranger Mike Greenfield, and Chaplain Robert Koehler of the Virginia National Guard offered some appropriate remarks, before the box was lowered into the grave. Topsoil filled the opening and Private Clarey’s grave was closed.

Daily, we come in contact with the words, images, and memory of the sacrifices these men made. But to actually come in contact with the remains of one of these men, was a moving experience for all involved. Personally, every year, around Memorial Day, I walk up the cemetery terraces and stop at Grave #1650. I think back to that day, as I stood in the cemetery, holding James Clarey’s leg in my hand. It was a powerful experience and one that touched me deeply. At the time of his death, Private Clarey was 33-years old, the same age I was when we retrieved his leg from the uprooted tree. He left behind a family and went off to war, like so many men did both before and after him. He fell in battle fighting for his country, making that ultimate sacrifice, and was buried far from home.

In a small sense, Private Clarey is fortunate, in that he lies in a marked grave. There are 15,000 Union soldiers buried in the Fredericksburg National Cemetery. Of those, only 16% are identified, the remainder buried as “unknown.” Each of those men has a story of sacrifice for his country.

As stewards of Private Clarey’s battlefield and final resting place, the

events around the discovery of his leg and it reburial are not likely to be forgotten by the park staff. I like to think that Private Clarey would feel honored by the care we gave his grave and the small private ceremony we conducted when we reinterred his leg. He, like all of the men buried in the cemetery, deserves to be remembered.