The first post in this series on living history at Chancellorsville Battlefield can be found here.

Bill Meuse, under whose direction and supervision the experimental camp was organized and run, left Fredericksburg & Spotsylvania National Military Park (FRSP) near the end of 1973. He departed to take a job at Harpers Ferry Center, which might explain why no analysis or formal review of the experimental camp can be located. Regardless, the camp was considered a success by park staff and was scheduled to reopen in 1974.

The second year at the Chancellorsville living history camp was a bit different than the first. With the transfer of Bill Meuse, Jim Kirkpatrick, a summer employee and member of the camp staff, was placed in charge of the program. A whole new roster of summer employees, with the exception of Kirkpatrick, were hired and along with volunteers the camp staff numbered around a dozen members. The camp’s persona changed from representing an ordnance detachment scavenging the battlefield to that of a picket detachment camp from the 2nd North Carolina Infantry. Additionally, the camp follower impression disappeared. The camp still remained open 24 hours a day, seven days a week.

Along the trail leading to the camp, visitors might have found themselves challenged by a soldier, as a Confederate picket might have when confronted by an unknown party. Once inside the camp, the staff engaged the visitors and described Confederate camp life. “Our real satisfaction comes when we can really reach someone,” explained Dave Jurgella, “make them relax and have them view us as being real.” Local news reporter, and both friend of the park and frequent reader of this blog, Larry Evans spent a day as an “embedded” journalist with the picket detachment. His article and report appeared in the July 22, 1974 edition of the Free Lance-Star and can be viewed here. The camp, still considered a novelty and unique interpretive tool, continued to garner press coverage and a photo spread of the program even appeared in National Geographic.

The most significant departure from the 1973 program was the largescale living history encampment staged on the battlefield in August 1974. This encampment, whose participants were chosen by invitation only, took place at Hazel Grove and Fairview on the Chancellorsville Battlefield. The comparitively large event, comprised of volunteers from Civil War reenactment and living history groups, was an idea conceived by Bill Brown, a NPS employee at Harpers Ferry, and Burt Kummerow. The two men belonged to a Revolutionary War living history group known as the 1st Maryland. This group formed out of the 1960s Civil War reenactment units known as the “Black Hats,” the 2nd North Carolina Infantry, and the Potomac Field Musicians. (For a wonderful description of these groups during the Civil War Centennial, check out the memoirs of Ross Kimmel here.) Members of the 1st Maryland still participated in Civil War living histories and ptiched the idea of a large encampment to the park. The program was largely organized by the volunteers, with the NPS providing logistical and interpretive support.

Participants of the 1974 Grand Confederate Encampment lining up to receive rations.

About 50 – 75 Confederate reenactors took part in the weekend’s activities. Weapons displays, field music and drill/tactical demonstrations were the programs presented for the public.

The event received local press coverage and was considered a success, but it was a departure from the park’s living history camp and certainly from the type of program Bill Meuse envisioned two years earlier. The use of outside volunteer groups for large weekend living history encampments would become the norm on Civil War battlefield in years to come and remains at the core of most NPS living history programs today.

September 1974 brought about the end of the second year for the Chancellorsville living history camp. The camp reopened in 1975 and continued to provide a living history experience for both the staff and the public each summer through the 1977 season. 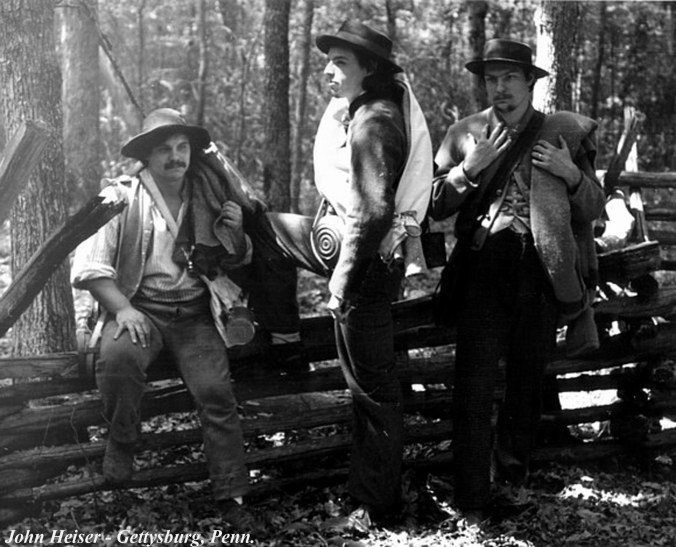 By the fall of 1977,  some park staff felt that the living history camp at Chancellorsville had run its course as an intepretive program. That coupled with land acquisitions, and the arrival of new staff, resulted in the decision to break up the camp. The 1978 season would feature living history as a key interpretive program at FRSP, but it would not be relegated to just one battlefield.

A follow up post that looks at the use of living history at other sites within the park and how the park uses this interpretive programming today can be found here.