Previous posts in this series can be found here and here.

Perhaps it was due to the park staff feeling that the Chancellorsville Living History Camp had run its course, or perhaps it was the budgetary concern about funding 4-5 summer positions focused on one location and one program, but 1977 was the camp’s final season. The park did not cancel living history altogether, it simply spread the program around to the other battlefields and sites.

The responsibility of living history was turned over to Park Technician Chris Calkins, newly arrived from Appomattox Court House National Historical Park. Calkins envisioned four separate programs, at four separate locations, each utilizing one “soldier.” Each would provide scheduled first-person interpretation talks three times a day and informal talks the for the remainder of the daily shift. The programs were designed, according to Calkins, to “bring to the visitor a more personalized portrayal of the great conflicts at Fredericksburg, Chancellorsville, the Wilderness and Spotsylvania.” 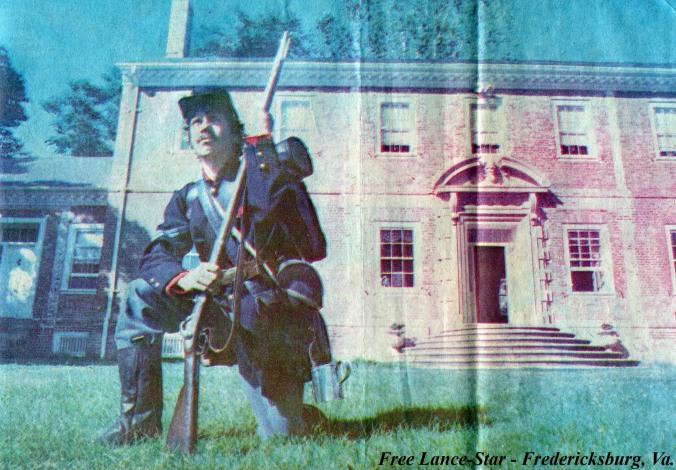 Beginning the summer of 1978, the living history stations were located at Prospect Hill on the Fredericksburg Battlefield, the former camp at Chancellorsville, the newly acquired and opened Chatham, and the Bloody Angle at Spotsylvania Court House Battlefield. With the exception of Spotsylvania, little site preparation was needed for the programs. At Spotsylvania, the park rehabilitated the 1930s reconstructed earthworks behind the Bloody Angle to provide a setting for the living history station at that site (see previous post about these earthworks here).

John Heiser as a Confederate soldier at Prospect Hill - 1978

The park advertised the three times a day that each soldier would deliver a structured 15-minute first-person program. The rest of the day, the soldiers engaged visitors that happened to stop at their locations. The concept of first-person interpretation involved the soldiers talking to the visitors as if it were 1862, 1863 or 1864. The soldier’s knowledge only extended to the time period they represented. This caused a little concern among the park staff, who tried to prep visitors for their encounters with the living historians. “We try to warn them about it,” said Park Historian Will Greene, “but the day is bound to comewhen some guy comes in with his car steaming, nine kids yelling and asks where he can get his car fixed and Terry [Winschel] will turn around and say ‘what’s a car?’ I’m afraid that man isn’t going to be too pleased about how his tax dollars are being spent.”

Over the next few years, the investment in the living history program was reduced, so that by 1983 only the Chatham and Chancellorsville stations were staffed with summer employees in Civil War attire. The park continued to use staff in living history roles to supplement the other park summer programs through the early 1990s, by which point the programs had been reduced even more, to one lone Confederate soldier stationed at Chancellorsville on weekends, when staffing levels permitted.

Keith Bohannon as a Confederate soldier at Chancellorsville – 1989

The rise of popularity of Civil War reenacting as a hobby in the 1980s and 1990s provided a cheaper alternative to parks pursuing living history programs. Utilizing reenactors as volunteers on weekends meant that parks could bring in large numbers of living historians, yet did not have pay their saleries nor pay for uniforms and equipment. A few parks still use paid staff to conduct lving history programs, but the bulk of these activities are now handled by volunteer groups.

Columbia Rifles, a volunteer reenactment group, as the 7th Wisconsin Infantry at Chatham - 2005

Volunteer groups are a real asset to park, as they typically come with a strong knowledge of mid-19th century material culture and help the park provide programs, yet keep the program costs down. The flipside to using volunteers is that they are not usually trained interpreters and may not have a strong background in the park story or interpretive goals as paid park staff. It is a tradeoff that has been accepted in order to reduce programming costs.

FRSP no longer offers costumed intpertive progams on a regular basis. The park schedules specific weekends when volunteer groups and individuals set up camp as part of a larger scheduled event. The only time the park utilizes its own staff in period clothing is once every four years, when the National Scout Jamboree has been held at Fort A.P. Hill in Caroline County, Virginia. During those weeks that the Scouts are at the jamboree, park staff set up a living history station at the Stonewall Jackson Shrine, just a few miles from Fort A.P. Hill. With the planned move of the jamboree in 2013, it is likely that this past year will be the last time such programs are offered at the Shrine.

When reaching out to younger generations, the sights, smells, sounds, feel, and even taste of living history programs can be memorable, often leaving a lasting impression. In the 1970s, living history was a novel tool used by parks such as Fredericksburg & Spotsylvania National Military Park (FRSP), but forty years later it has become commonplace.  Today, any given weekend in the summer, one can find a living history program on some Civil War battlefield in Virginia. There is no doubt that living history programs are extremely popular with the public and have helped to draw visitors to the battlefields.