From: Noel Harrison (and with an Alan Zirkle film awaiting readers who make it to the end)

The antebellum and wartime stories of Stafford County’s Belle Plain area, which in 1864 hosted at least five Union wharves along a two-mile stretch of Potomac Creek, are a source of continual research inspiration. In an article published in the July-August 2000 issue of Military Images magazine, I had the privilege of sharing the discoveries of a friend and mentor, the Belle Plain/White Oak historian and museum-director D. P. Newton. He located the modern-day camera locations of four of the photographs of Confederate prisoners who had clustered in the various “Punch Bowl” ravines near those Belle Plain wharves. Sources in D.P.’s research files, most notably the diary of Union Colonel Theodore Gates, showed that the ravines and wharves hosted more than 7,800 captive Southerners between May 13 and May 23, 1864.

In locating the camera positions, D.P. had accepted a challenge that historian William A. Frassanito issued implicitly in his 1983 classic, Grant and Lee: The Virginia Campaigns 1864-1865—find the sites on a modern landscape that is “densely wooded with numerous hollows.”

A decade after publishing the Military Images article, Belle Plain again captured my imagination when I suddenly noticed that one of D.P.’s site-identified images, shown here alongside a modern near-equivalent that he made around 2000:

…had originated with a glass-plate negative–intended to produce carte de visite photographic prints–that was exposed in a four-lens camera to record four slightly different, sequential scenes: 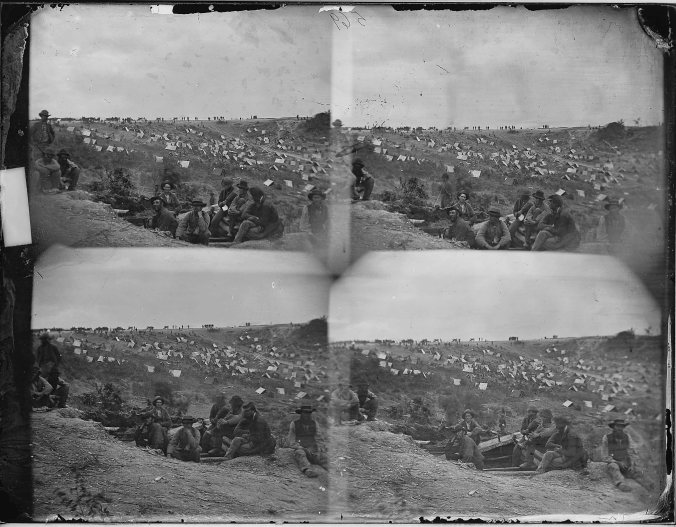 The plate had recently been posted online, as a digital file, in an intermittently accessible sampler of Civil War photographs in the collection of the National Archives.

Over the years, different exposures from this same plate have appeared singly in a number of publications, and all four exposures appeared together at least once online, but only as cropped details and in a discussion limited to evaluating them for information about Confederate uniforms. The particular exposure, from the four, that had appeared in Frassanito’s 1983 book was accompanied by his attribution to a photographer or photographers working for Brady & Co., his dating of the image—along with all the other views of Confederate prisoners at the various Punch Bowl locations—to May 16 or May 17, 1864, and his observation that one of the Confederate prisoners likely wears headgear-insignia of the Fourth Alabama Infantry.

Inspired to look for other, four-exposure plates, I found a second one at the same online source: 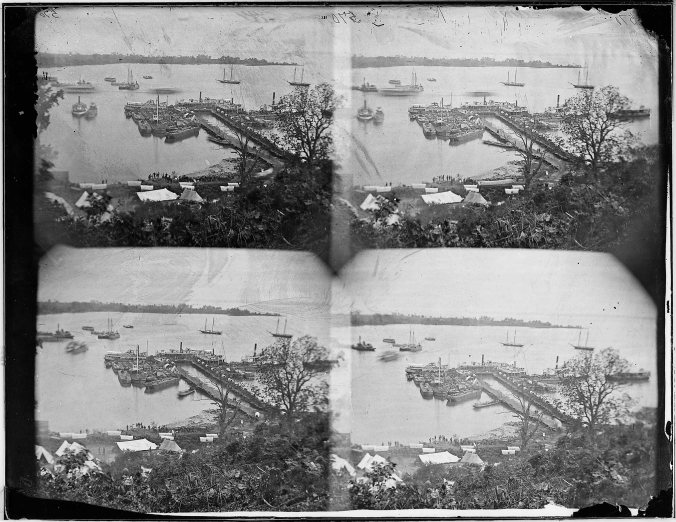 The National Archives assigns this an identification of “Pontoon landing, James River, Va.” I suspected that the caption was in error, and that the subject was instead one of the Union wharves along Potomac Creek. D.P. Newton confirmed my suspicion, and specified that the structure was easternmost of the five Potomac Creek wharves of 1864 for which he has thus far found historical documentation. The distinctive, four-exposure format presumably ties the plate to Brady & Co. I found no specific date, but it was likely sometime between May 16, 1864, by which time this particular wharf was extant on Potomac Creek and attracting the attention of at least one other photographer, and May 18, when, Frassanito suggests, all the photographers were departing or had departed for Fredericksburg.

To make the four images of the wharf, the photographer pointed his camera northeast across Potomac Creek, in the foreground, the narrowing peninsula of Marlborough Point, middleground, and the Potomac River, background, towards the distant landmass of Maryland.

The photograph below shows the site of the same wharf today but looks in a different direction—northwest—to accommodate postwar forest cover and the present lack of convenient access to the overhanging bluff used by the Civil War photographer. Factoring for the post-Civil War erosion of Potomac Creek bank, D.P. Newton’s estimated area of the sites of the U-shaped wharf’s side-by-side entrance and exit in 1864 is marked by the blue arrow: 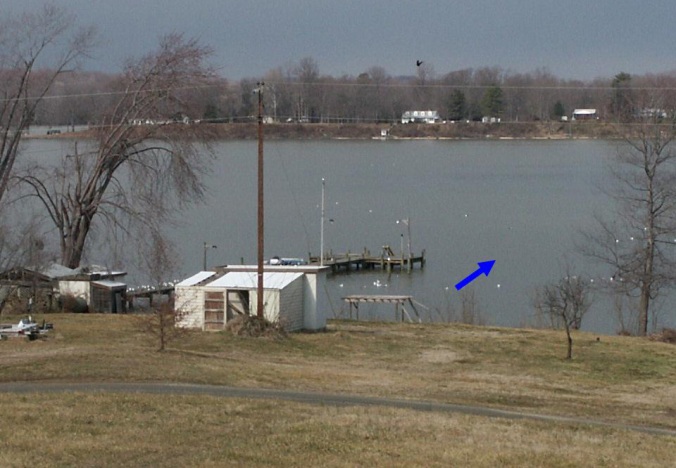 As a final piece of background, and for orientation to the modern landscape—since the specific places under discussion are today situated on private property and not open to the public—I provide a mapping below of the relative camera-locations used for photographing the prisoners (red arrow, left) and the wharf (red arrow, right), together with the known locations (yellow lines) of the Union army’s individual wharves on Potomac Creek in 1864: 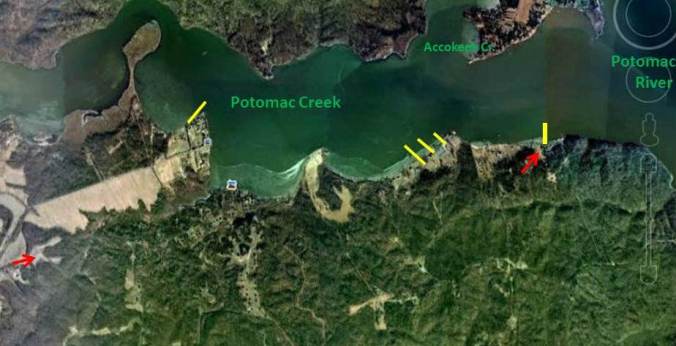 Although I may have missed it, I have not seen a discussion in print or online that suggests that four-exposure, sequential image groupings could be the closest we’ll come to having contemporary movies of military personnel in Civil War campaign/combat zones. Yet I suspect that such is the case.

(The Federals, by the way, definitely regarded Belle Plain as situated in a dangerous zone in May 1864, and fretted over its protection. On May 17, with the principal armies confronting one another southwest of Fredericksburg and readying themselves for a series of major maneuvers around Spotsylvania Court House, General John J. Abercrombie reported from Belle Plain that Confederate guerrillas had been “making demonstrations” against his troops and facilities: a scout was wounded while guiding Northern soldiers past a point about four miles distant, ambulance wagons were “fired on, and horses captured on the road from here to Fredericksburg,” situated some eight miles distant.)

My sense of the thus-far overlooked importance of four-image sets to the animated pictorial record of the Civil War carries several caveats. I am neither a specialist on wet-plate photography nor on its wartime artists and their itineraries. My terminology and synopsis here are drawn mainly from the books of scholars like Frassanito and Bob Zeller, and likely overlook important details and nuances in those or other important sources. I lack, too, expertise in film; I’ve consulted only general references online. I trust, though, that more knowledgeable readers of this blog will offer any needed clarifications or adjustments—and help answer any additional technical questions that arise—while at the same time understanding my basic point that one camera may have produced more sequential exposures, and at a faster rate, than what we now commonly associate with the photography of Civil War field operations.

For years, certain sequential groupings of Civil War photographs have appeared in historical publications and online, with accompanying discussions that rightly emphasize their immediacy and narrative appeal. Among these unique series of pictures that record Fredericksburg-area subjects, sequential wartime photographs from 1864 include a set of at least seven views of a Union burial crew at work in Fredericksburg, and a set of three views showing Generals Grant and Meade meeting with other commanders in front of Massaponax Church. In suggesting an analogy for the Massaponax series, in his book-length survey of 2005, The Blue and Gray in Black and White: A History of Civil War Photography, Bob Zeller expresses the appeal of such groupings: “a rudimentary motion picture.”

Yet the method used in making the two sets of Belle Plain pictures that I’ve posted above would have allowed a single photographer to expose more images onto a collodion-coated, light-sensitized glass plate at a faster rate. Intervals of only about 10 or 15 seconds were needed for each of four different exposures in a four-lens camera (four different scenes exposed sequentially onto one plate). Compare this with the approx. 8-10 minute intervals used for each exposure in the Massaponax and Fredericksburg burial-crew sets—exposures in a single-lens camera (one scene exposed onto one plate) or a double-lens/stereographic camera (two slightly different scenes, or views of the same subject from slightly different angles, exposed simultaneously onto one plate). With a four-lens camera, in other words, a single plate could record four successive scenes at a rate that was slowed only the photographer’s need to uncap one of the four lenses, leave it uncapped for the 10-15 second exposure time, recap it, and then uncap the next lens…without the much greater time-expense required for preparing, carrying to the camera, exposing in the camera, carrying from the camera, and finally fixing an image on each of four separate plates in succession.

By no means should the result be misrepresented as a true movie. I gather that the frame-rate common in recording motion for films and television today is 240-300 frames-per-ten-seconds, far from the rate that I estimate was used for the two sets of Belle Plain exposures: a single frame in about the same amount of time. Equally important, the frame-rate of the four-lens cameras of the Civil War field photographers could never exceed a total of four images. (I understand that some four-lens cameras could produce eight exposures, rather than four, but I have yet to see an eight-exposure sequence for wartime scenes in the field.) After making the four exposures, a new plate would be needed, which then imposed the same, time-expensive cycle of plate-preparation and other steps associated with single- and double-lens cameras.

Again, however, the two four-exposure sets created along Potomac Creek near Belle Plain in mid-May 1864 seem in a technical sense markedly closer to modern movies than, say, the Massaponax set (made by a single photographer on May 21, at least four days after the creation of the prisoners set) and the Fredericksburg burial-crew set (made by at least two photographers, with two separate cameras aimed from slightly different locations, on May 19 or May 20, at least two days after the prisoners set).

Since the intervals between the exposures in the Belle Plain image-groups did not appear to be consistent, I asked Alan Zirkle, a photographer and National Park Service volunteer, to evaluate their visual flow by making a short film in which first the prisoners set and then the wharf set are shown in several loops at a sped-up rate of 2 frames per second (with a slower loop in-between each, for comparison). Alan used my guessed-at ordering for the exposures: in the prisoners set—upper right, upper left, lower left, and finally lower right; in the wharf set—upper left, upper right, lower left, and finally lower right:


(For a large-screen version of the same presentation click here.)

In the prisoners part of Alan’s film, I found the results especially striking for portraying what is probably a conversational exchange between the three men sitting in a row, the man who directly faces the photographer at center sliding his hand across his mouth, and the figures on the far horizon—presumably Union guards—shifting back and forth. In the wharf set, I’m struck by the blurry departures of the various craft, and the exiting of a wagon from the structure. Although a backwards drift of the nearest two vessels, as they begin their side-by-side departure, creates some sense of the images being shown out of order, that drift was evidently natural.

Special thanks to Alan Zirkle for producing a complicated product at short notice, and to D.P. Newton for sharing the extensive historical files of the White Oak Museum, and his personal knowledge. I’m also grateful for the scholarship, cited above, of historians William Frassanito and Bob Zeller, as well as to a You-Tuber named “Ron,” for suggesting with post-Appomattox and studio images of the Civil War era new ways to evaluate pre-Appomattox, campaign-zone images as well.

22 thoughts on “Are these Photographs Our Earliest, Closest Equivalents of “Movies” of Civil War Field Operations?”