Students, historians, and collectors of Civil War battlefield photography are quite familiar with the name William H. Tipton. He was one of the most prolific postwar photographers in Gettysburg, Penn. and his landscape images are quite sought after, as they are wonderful documents in helping understand the sites of that battlefield. Little known, however, is the fact that he lugged his camera to historic sites outside of South Central Penn., including an 1887 visit to the battlefields around Fredericksburg.

On May 5, 1887, a train from Richmond arrived at the Fredericksburg station. Among its passengers were approximately one hundred Union veterans on an excursion to visit Virginia’s battlefields. Most of these men were veterans of the 57th and 59th Massachusetts regiments and they had, prior to their arrival in Fredericksburg, visited the battlefields around Petersburg and Richmond. Their trip brought them to the Fredericksburg area for the same purpose. They spent two days touring the local battlefields and revisiting sites that many of them had not seen since the war. The Fredericksburg Free Lance covered their visit, describing the places they went and even listing the members of the party. Included in that list was “W.H. Tipton, photographer from Gettysburg.” Fortunately for us 125 years later, Tipton wasn’t merely sightseeing, but was capturing on glass those sites that he saw. 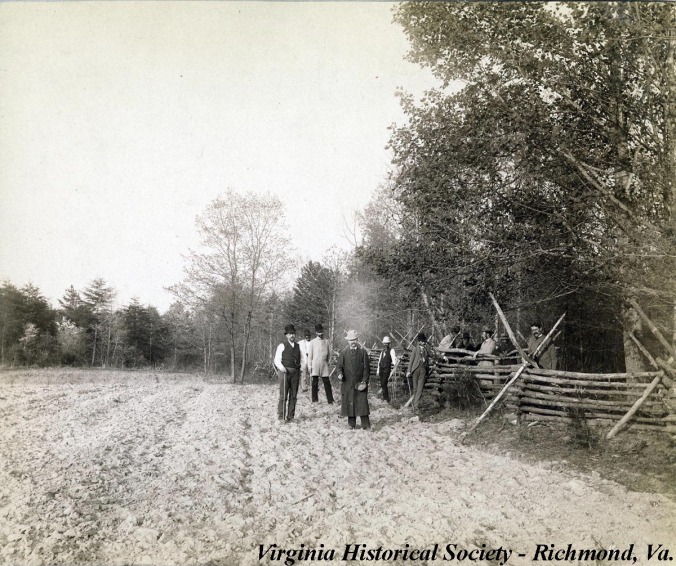 “Bloody Angle Spottsylvania May 5th 1887. Near the stump of tree shot down by bullets; the but of the tree, 15 inches in diameter is in the National Museum in Washington.” Typed label pasted on photo mount.

Other sites that Tipton captured during the visit included the Ny River Bridge, the Orange Plank Road and Brock Road intersection on the Wilderness battlefield, and the front lawn of Brompton in Fredericksburg. Tipton and the group were also intrigued by the Spotsylvania County Jail, where two imprisoned women were the focus of much discussion. (Perhaps more on these women in a future post.) 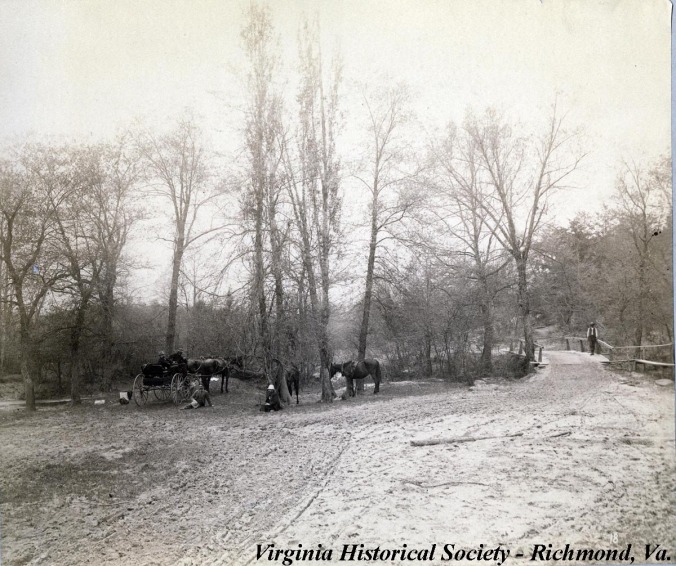 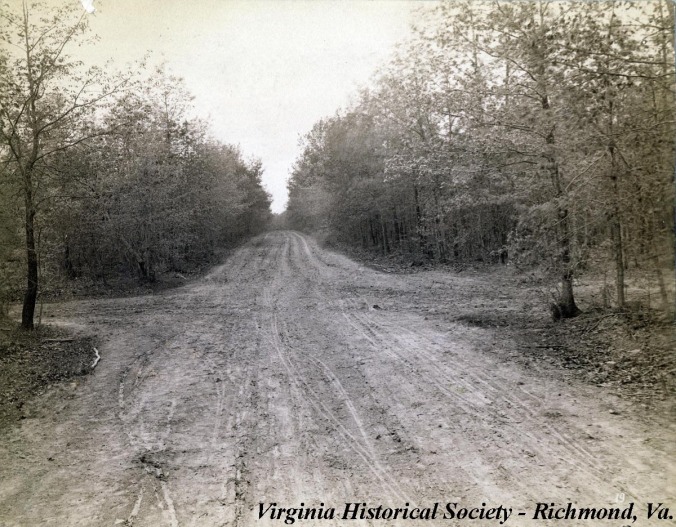 “The Wilderness, Va. Orange Plank Road looking south-west across the Brock Road. It was here that the 9th Corps reported to Gen. Hancock. The 57th went down the Plank Road to where it begins to bend to the left & then right obliqued into the woods & onto the firing line.” Typed label pasted on photo mount. 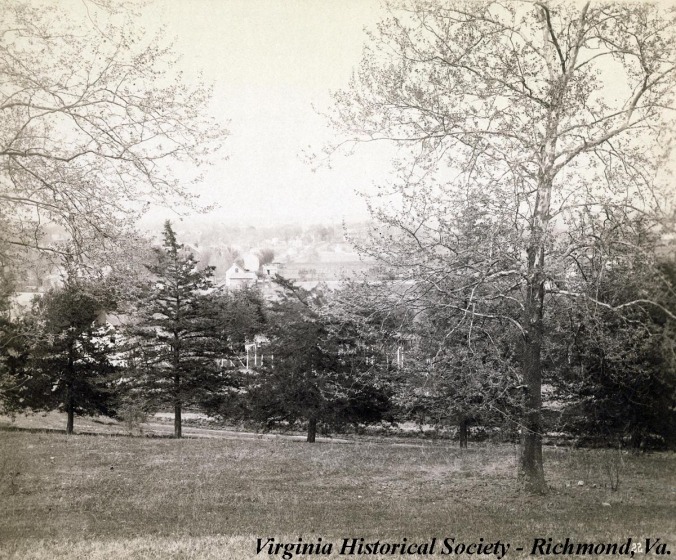 “Fredericksburg from Marye’s Heights. Sergt. Plunkett was wounded very near the center right hand side of the picture.” Typed label pasted on photo mount.

“Sergt. Plunkett” is probably Sergeant Thomas F. Plunkett of the 21st Massachusetts Infantry. Plunkett received the Medal of Honor for his actions at Fredericksburg. His citation reads: “Seized the colors of his regiment, the color bearer having been shot down, and bore them to the front where both his arms were carried off by a shell.” 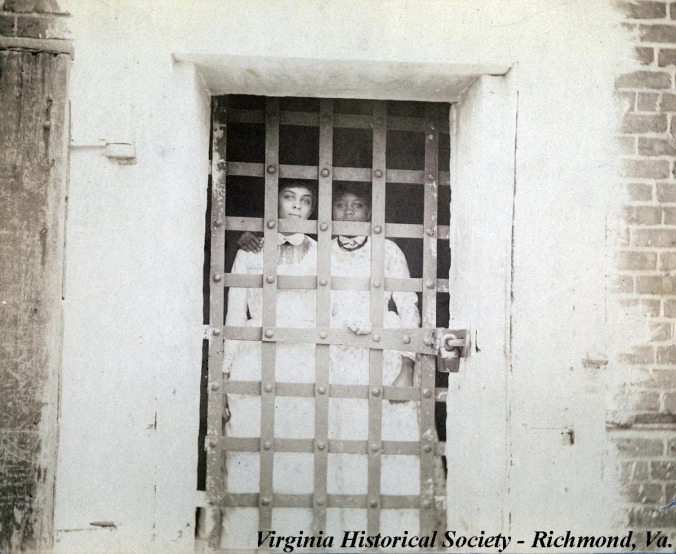 “Mary Waller and Jennie Boggs – behind the bars of Spottsylvania jail.” Caption from Tipton’s catalog.

Copies of these four images are in the collection of the Virginia Historical Society in Richmond, Va. Each photo carries Titpon’s backmark, as well as the stamp of their original owner – J. Brainerd Hall of Worcester, Mass. Hall was listed in the newspaper as being in attendance for the excursion. Josiah Brainerd Hall was a veteran of Company B, 57th Massachusetts Infantry and survived a gunshot wound on May 6, 1864 in the Wilderness. 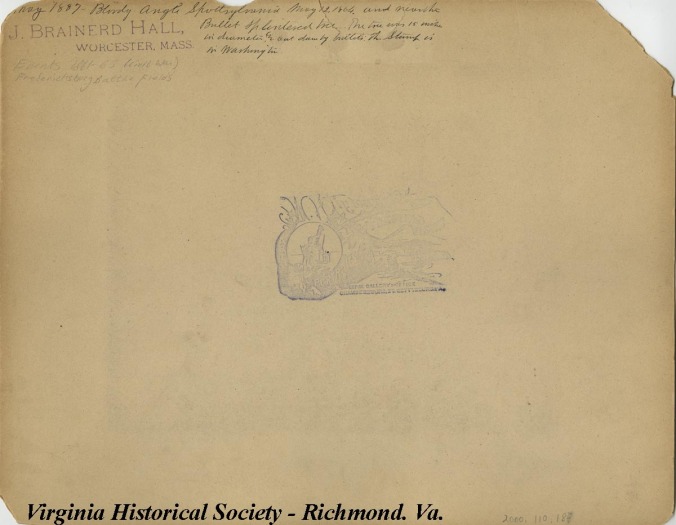 A look at Tipton’s published catalog from 1894 shows quite a number of photos of sites outside Adams County, Penn. The four photos posted here are among those listed in his catalog. Others from the Fredericksburg area include views of the Spotsylvania Court House, the Sedgwick Monument at Spotsylvania, a couple of the Chancellor House at Chancellorsville, and one of the Gayle House at Spotsylvania. If any of our readers are aware of surviving examples of Titpon’s Fredericksburg area work, which I have not posted here, I’d love to hear about them. A few of Tipton’s Petersburg photos, also listed in his catalog, are in the Virginia Historical Society’s collection and are viewable through its on-line digital catalog. 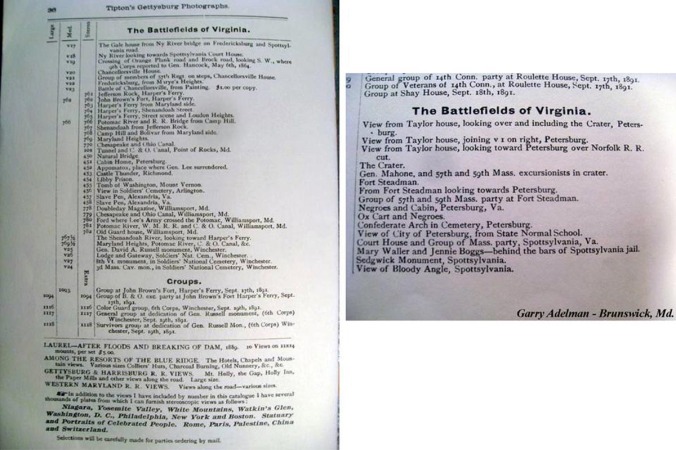 It would be interesting to know what Tipton’s relationship was with the men on this excursion. Was he invited along to record the reunion? Did he learn about the trip and ask to join the veterans, realizing the financial opportunity to get photos of the Virginia battlefields? Interestingly, Tipton was not the only photographer present during this gathering of Massachusetts veterans. There was another individual capturing these scenes and marketing them for sale. Check here for a follow up post.

Thanks to Garry Adelman for sharing his copy of Tipton’s catalog.