Update:  We have added another example of this sort of musing at the end, from a Delaware soldier, sent along by the park’s superintendent Russ Smith–who hails from Delaware and has immersed himself in things Delawarian.  If any of you have other examples–North or South–pass them along and we’d be glad to include them here.

I have spent much of the week plowing through source material, looking for new tidbits or lyrical quotes. In doing so, I came across this one, which expresses better than most anything I have seen how at least some soldiers viewed the evolution of the war.

The letter was written on November 21, 1863,  by William Mackenzie Thompson of the 11th New Jersey, and appears in Dominick Mazzagetti’s”True Jersey Blues”:  The Civil War Letters of Lucien A. Voorhess and William Mackenzie Thompson, 1th Regiment, New Jersey Volunteers (Fairleigh Dickenson Press, 2011), a smartly assembled volume you probably haven’t seen yet, but should. These letters are of a genre that Civil War historians have increasingly embraced over the decades–one of I think special value. While we may treasure the quaintness and personality of letters written for consumption by those at the hearth, I have found that letters written expressly for publication in the local newspaper are often many times more useful.Thompson’s and Voorhees missives  are perfect examples, surpassed by few (most notably George’s Breck’s monumental correspondence with the Rochester Union and Advertiser, which I have transcribed, but just haven’t gotten around to getting published yet).  Thompson and Voorhees observed so they could write, and they wrote purely to describe–and they did so within a political environment (a newspaper) that begged of a perspective, and so they touch on most of the major issues of the day.  Here’s the passage.   END_OF_DOCUMENT_TOKEN_TO_BE_REPLACED

The war’s impact on the Fredericksburg area was felt in many ways, from the destruction wrought by four major battles, to the inconvenience and strain felt by nearly two years of occupation by the opposing armies. When the armies marched away, they left not only ruined farms and decimated livelihoods for local residents, but they also left an immense amount of war material behind. Relics and artifacts of war have always fascinated people and those associated with the Civil War are no different. Almost as soon as the smoke cleared, curiosity seekers and collectors scoured the battlefields and empty camp looking for objects left by the armies. Some individuals amassed great collections and it was not unusual after the war to find small privately-run museums adjacent to the battlefields. Such was the case in 1880s Fredericksburg.

END_OF_DOCUMENT_TOKEN_TO_BE_REPLACED

This weekend we will have an uncommon opportunity. The Fredericksburg Area Museum has arranged for a visit inside the Sentry Box, one of the oldest and perhaps the most beautiful building on lower Caroline Street.  Open to the public from 5 until 5:30 on Saturday September 17, the interior visit to the Sentry Box will kick  off a broader walking tour of lower Caroline Street that will focus mostly on the 18th century roots of the street, looking at its evolution (both socially and architecturally) into the first half of the 19th Century. While lower Caroline is not the oldest part of Fredericksburg (indeed, it’s really Fredericksburg first suburb and subdivision), the street does have the biggest concentration of 18th century buildings in town. 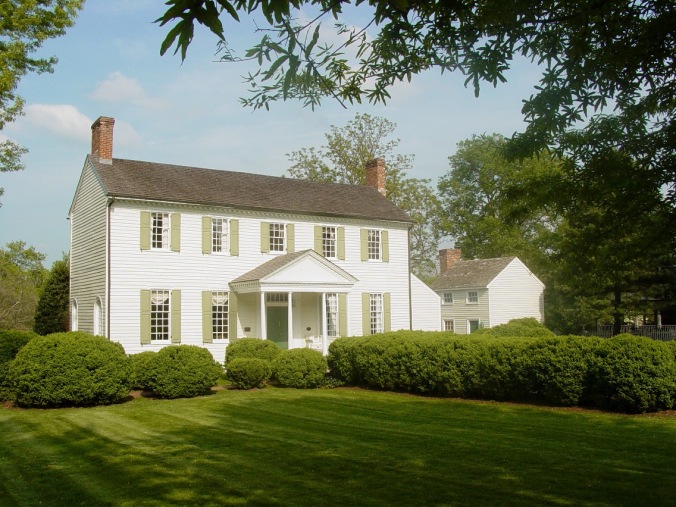 Our friend Scott Walker of Hallowed Ground Tours and I will be tag-teaming on the tour (that in itself should be a bit of a curiosity and spectacle—a bit like Perry Como jamming with John Mellencamp). The walking tour begins at 5:30 and will last about an hour. It will of course cover much the same physical ground we covered in our History at Sunset program in August, but we will be tending more toward the 18th century buildings on the street, so we will look at several buildings, sites, and stories I largely ignored then: Goolrick-Caldwell, Mortimer House (216), James Monroe (301), and Rocky Lane.

During the open house, Harry Ward, author of the very nice 1980 biography of George Weedon, will be on hand to sign books.  Weedon will be a major focus of the tour.  He was a prominent local tavern-keeper, friend of Washington, general during the Revolution, and the builder of the Sentry Box in 1786.