After their rebuke at the Battle of Arby’s, the Union army recoiled long enough along the Warrenton Road for the Confederates in Falmouth to both prepare to leave and to burn the bridges in their wake. Soon after dawn, as the Union columns swept down the hill into Falmouth, the Confederates put their plan into action. The Falmouth Bridge went up in flames, as did the Chatham Bridge and the R,F&P bridge farther down. Fredericksburg had never seen such a day.  Some white residents scattered, fearful of the looming Yankees. Some slaves rejoiced at the Yankees’ coming. And a few people ventured out to watch, including diarist Betty Herndon Maury, who left a vivid description of the destruction that day.

I went down to the river, and shall never forget the scene there.  Above were our three bridges, all in a bright blaze from one end to the other, and every few minutes the beams and timbers would splash into the water with a great noise.  Below were two large steamboats, the Virginia and the St. Nicholas, and ten or twelve vessels, all wrapt in flames.  There were two or three rafts dodging in between the burning vessels, containing families coming over to this side with their negroes and horses.

Here are a couple of images that show some of the damage described by Mrs. Maury. The first shows the destroyed ships opposite city dock–drawn in May 1862.

The burned hulks of ships burned by the Confederates on April 1862. The distinctive barn in the background appears in sketches of Washington’s Ferry Farm, which in turn locates this scene as just a few yards downstream from Fredericksburg’s city dock.

This is the only known image that shows the destroyed Falmouth Bridge, burned by the Confederates on April 18. Lumber from the bridge was taken by Union engineer Washington Roebling, who in June built a wire suspension bridge on the abutments of the Chatham Bridge (we wrote about Roebling’s bridge here). END_OF_DOCUMENT_TOKEN_TO_BE_REPLACED

We try not to tend toward the minute in this space. Rather, we try to focus on revelation with meaning, especially things that have never quite been understood well.  But today we’ll combine minute and revelation a bit and look at an event most of you have likely never heard of, but which in April 1862 reverberated loudly across the American landscape.

One hundred and fifty years ago this week, as we have noted previously (here and here), the Union army arrived on the shores of the Rappahannock in Stafford County, opposite Fredericksburg.  Their arrival was tumultuous, heralded by a chaotic, deadly skirmish in the middle of the night that I have taken to calling the Battle of Arby’s, in honor of the culinary presence very near the site of the clash.  As we wrote in a post the other day, the Union army clashed with the Confederate rearguard near Berea Church on the afternoon of April 17. That was not enough for Christopher Augur, commander of the Union troops in the area.  He wanted to get to the crossings of the Rappahannock at Fredericksburg before the Confederates still lingering on the Stafford side of the river could destroy the bridges. To do that, he decided to do something a more experienced commander might not have dared–a nighttime raid into Falmouth.

As the soon as the Union army reached Stafford County, citizens inclined toward the Union stepped forth to help. On this evening of April 17, a Connecticut-born local named Horace B. Hewitt–a farmer who owned 152 acres near Hartwood Church–came into the Union camp near Berea Church.

Hewitt had just come from Fredericksburg and had seen that the Confederates had placed a barricade across the Warrenton Road about a mile northwest of Falmouth.  Hewitt promised Augur that he could lead the Union cavalry around the barricade, clearing the way for a dash to capture the Falmouth Bridge before the Confederates could burn it.  Augur accepted Hewitt’s word and his services, and just before midnight ordered parts of the 2d New York Cavalry (Lt. Col. Judson Kilpatrick at the reins) and 1st Pennsylvania Cavalry (Col. George Bayard) to horse. The happily bedizened 14th Brooklyn infantry–with their red pants and kepis–joined in as support, and illuminated by a half moon, the column of 1,500 men and horses started out from Berea. 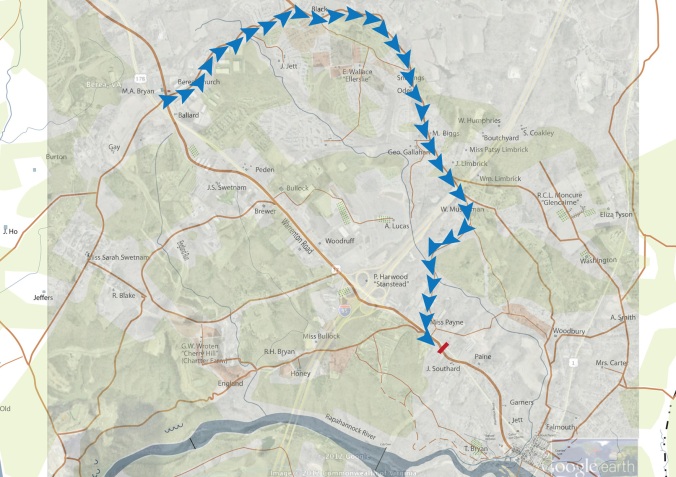 The Union route from Berea to the Confederate barricade near Arby's.

Mr. Hewitt led them not directly down the Warrenton Road, but rather to the north–along what is today Berea Church Road to Truslow Road. Eastward along Truslow the Yankees rode. Just beyond where today Truslow crosses Interstate 95, Hewitt led the column onto a farm road to the right–a now-vanished path that led back to the Warrenton Road (Route 17). END_OF_DOCUMENT_TOKEN_TO_BE_REPLACED

One Hundred and Fifty years ago today, the Union army arrived opposite Fredericksburg for the first time.  It was Good Friday.

Of the many narratives of that day, two stand out for both their quality and their contrast.  The first is an account written by Helen Bernard, a white resident who was staying just outside town at a house called Beaumont–near where Gold’s Gym stands today.  (The following is from Rebecca Campbell Light’s excellent War at Our Doors. For a great history of Helen’s primary home at Gay Mont in Port Royal, click here.)

Beaumont, Spotsylvania County.  Good Friday, 1862. I write while the smoke of the burning bridges, depot, & boats, is resting like a heavy cloud all around the horizons towards Fredcksbg. The enemy are in possession of Falmouth, our force on this side too weak to resist them…. We are not at all frightened but stunned & bewildered waiting for the end. Will they shell Fbg., will our homes on the river be all destroyed? …. It is heartsickening to think of having our beautiful valley that we have so loved and admired all overrun & desolated by our bitter enemies, whose sole object is to subjugate & plunder the South…..

This is a powerful description of what the arrival of the Union army meant to most white residents in Fredericksburg.  It also reflects what has over the decades been our traditional understanding of the event hereabouts.

But here’s another description of precisely the same moment in time, written by another Fredericksburger, the slave John Washington.

April 18th 1862. Was “Good-Friday,” the Day was a mild pleasant one with the Sun Shining brightly, and every thing unusally quiet…until every body Was Startled by Several reports of [Yankee] cannon…. In less time than it takes me to write these lines, every White man was out the house. [But] every Man Servant was out on the house top looking over the River at the yankees, for their glistening bayonats could eaziely be Seen.   I could not begin to express my new born hopes for I felt…like I Was certain of My freedom now.

Same event, powerfully described, but with a totally different meaning to each writer.

We’ll have more about the onset of the Union occupation in the next couple days.  Don’t forget Years of Anguish:  Slavery and Emancipation this weekend, with David Blight and Thavolia Glymph.  The Fredericksburg Baptist Church on Princess Anne Street, from 1-5.

One hundred and fifty years ago tomorrow, April 17, the first wave of Union troops began its move toward Fredericksburg.  From camps around Warrenton Junction (modern-day Calverton) and Catlett Station on the Orange and Alexandria Railroad, the division commanded by General Rufus King started south.  His lead brigade, commanded by General Christopher Columbus Augur, consisted of four New York regiments and the 2d US Sharpshooters.  They followed what is today Elk Run Road (Route 806) to the crossroads at Bristersburg, and then south on Bristersburg Road (Route 616) into Stafford County.  While these roads would become familiar routes for the Union army as it moved into and out of the Fredericksburg region over the next two years, no Union troops had passed that way prior to April 1862.

By 1862 standards, the landscape these troops passed through was nondescript.  It would seem so today as well, except that the area is little changed since the war–the roads still narrow and winding, often closed in by roadside forests.  In April 1862, the route’s most notable characteristic was the people the soldiers encountered along the way:  slaves.  As one New Yorker noted, it was the first and only time during the war the soldiers saw slavery undisturbed.  And that status would remain intact for only moments after the arrival of the Union army.

Other troops followed much the same route in the coming days and weeks.  One of them remembered,

The road was constantly thronged with contrabands who…were making their way on “double quick,” for the land of peace and freedom.  I saw the tears stream down the dark faces of those too old to leave, as those in the prime of life bid them a long adieu, and with hurried step started from the house of bondage.  The attachment that exists between the slave and the master, is like the attachment between oil and water…  The very institution itself hardens the heart and callouses all feelings of humanity.

At midday on April 17th, the Union columns approached the junction of Bristersburg Road, Hartwood Road (Route 612) and Poplar Road (Route 616).  There it likely split, taking both roads south to the Warrenton Road, today’s Route 17.  Once on Route 17 (today four lanes rather than 2 and considerably straightened by our friends at VDOT), the column turned left toward Berea Church and Fredericksburg. END_OF_DOCUMENT_TOKEN_TO_BE_REPLACED