Few places in the Fredericksburg region are more steeped in both history and mystery than Moss Neck. Jackson’s headquarters during the winter of 1862-63, the place has been portrayed by artists and historians alike as a happy refuge, where war, a family, and a great man came together for several magical months.

Moss Neck is privately owned and rarely opened for visits. But this Friday night we will have special access, as History at Sunset visits Moss Neck, thanks to its kind owners.  Frank O’Reilly and Eric Mink will lead the way through the property.  For more information, click here and scroll down.

We hope our M&C readers can join us. The program begins at 7 p.m.

This post will mean a good deal more to you if you read our posts on this image, here and here–some of the most popular posts we have done.

This image, and a close companion, were taken on or about August 19, 1862, during Pope’s retreat from Culpeper County. The image shows slaves crossing the Rappahannock River at Tinpot Ford, just below the Orange and Alexandria Bridge, visible in the background. It is one of the most famous images of the Civil War, used constantly to illustrate slaves’ efforts to achieve freedom. It has become ubiquitous, even a bit of a cliche, largely because no other image comes close to matching its power.

In our look at the images last year, we were able to show where the image was taken, but did not have access to the site itself.  Our friend Clark B. “Bud” Hall, an indefatigable and unconquerable preservationist and maven of all things Civil War Culpeper (he is the only one of the Virginia crowd of preservationists to have his picture on the front of a national magazine, so far as I know), recently managed to visit the site and kindly share with us this image of the site today.  His explanation follows.

This is Tinpot Run Ford, and the old road from Culpeper approaches the river from the south (still there). The ford road comes out of the river on the north side and is still quite evident where it [crossses] the river into Fauquier. If you look carefully [at the original], you can discern Tinpot Run entering the river.

This is a modern-day view (July 2012). The ground I am standing on is the sandbar situated in the river you can see above. The river curls around to the…south from there. As is shown in the original images, you can barely discern Tinpot Run to the right.

My picture is taken a bit closer than O’Sullivan’s original image, and you can see the bridge (re-built) appears closer–which is a function of the zoom lens distorting the natural depth of field.. I will return to this scene on August 19 and take the picture on or about the same day it was taken 150 years ago.

Our great thanks to Bud Hall for passing this image along.

[A new occasional feature, “Favorite Places.”  If you have one in the park, let us know–either in the comments or through email–and we’ll pass it along.]

Few people know of it (until now), and fewer still use it (it’s just as well), but it is one of my favorite places in the Fredericksburg region: the so-called “back path” at Chatham, just south of the Big House.  It is cloaked in what a soldier might have called “a dark, close wood,” and descends Stafford Heights to River Road by ancient steps haphazardly and occasionally dug into the hillside. In my hundreds of passages of the back path, I have never–not once–passed another person.

We know little of its origins, but both logic and appearance suggest it’s been used a very long time. Local legend is that Chatham’s last private owner, John Lee Pratt, used the path for his walks into town every day.  It’s hard to imagine that hundreds of others used it, too, for it is the easiest way from Chatham down to River Road, and thence into Fredericksburg across the Chatham Bridge.

If you have such a favorite place, let us know…..

Fredericksburg under Union occupation in May 1862, before the repair of the railroad bridge into town. Looking NW.

One hundred and fifty years ago tomorrow, the Fourth of July dawned in Fredericksburg–a beautiful, clear, breezy day. For eight decades the town had celebrated the nation’s independence; but in 1862, residents in the town passed the day quietly, without notice, their attention drawn more by the news of the massive fighting around Richmond and hopes for their own independence from the now-hated Union. It was a “week of intense anxiety,” wrote Jane Beale. Though buoyed by word of victory, she, like many others in Fredericksburg, feared that death’s tendrils would once again touch the town (Mrs. Beale had lost a son in the Battle of Williamsburg).

A Union officer rode through the streets that morning. He noted there was none of the customary protests from the citizenry. Rather, he said, “Young Virginia was in the dumps,” and he wished to have none of dreariness. “I hurried across the river,” he wrote, “lest I also should be infected with the painful gloom.” 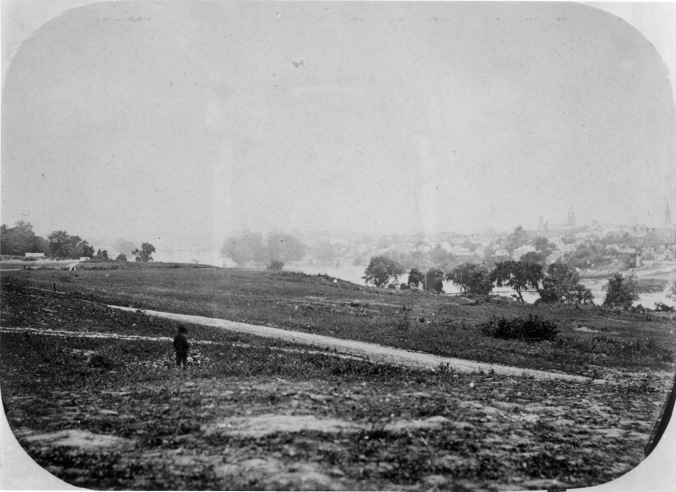 Fredericksburg from the camps of Gibbon’s brigade, in what is today Pratt Park. Many of the events held on July 4 probably took place in this field.

Across that river in Stafford County, the Union army suffered anything but gloom, intent on celebrating the “86th birthday of this great and once happy Republic.” In John Gibbon’s brigade of western troops (later known as the Iron Brigade), men and officers started the day by swapping roles–the officers taking the ranks as privates, and select enlisted men acting as officers. The men rejoiced at the sight of colonels and “other big shoulder straps” policing the camp, “picking up old bones and trash.”

In Marsena Patrick’s brigade of New York soldiers, the day featured a concert, speeches given upon a platform adorned with cedar boughs–purposely reminiscent of Northern forests–and the reading of the Declaration of Independence. Virtually all the batteries with each brigade fired a salute that day–the climax coming at noon, when Monroe’s Rhode Island battery, near the Phillips House, fired a salute of 84 guns. All of this was clearly audible in Fredericksburg, and that of course was partly the point.

But the day’s most notable events came in the afternoon, when games and races broke out all over Stafford Heights. Gibbon’s brigade held a mule race, probably in what is today Pratt Park.

END_OF_DOCUMENT_TOKEN_TO_BE_REPLACED

As most of you likely know, the Fredericksburg region suffered a serious weather event last Friday night, leaving a trail of vegetative wreckage and human discomfort rarely seen in these parts (it was not as bad as Isabel in 2003, but neither was it your standard summer thunderboomer).  As of this writing, Spotsylvania Battlefield remains closed entirely, as the park’s maintenance staff works to clear trees from roads and trails. Don’t fuss too much if the grass starts looking a bit scraggly elsewhere in the park; the staff will be using chainsaws rather than lawnmowers for the foreseeable future. 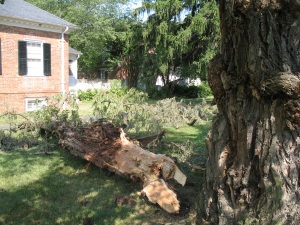 Amidst the common casualties of nature is one tree worth noting. On the front lawn of Chatham, about 30 yards south of the famous Catalpas, are two Locust trees, which also bore witness to the 1862 battle.  One of them suffered what will likely be, over time, a mortal blow Friday night.

The tree is clearly visible in one of the 1863 photographs of Chatham.  Its adjacent twin stands undamaged, though a bit bedraggled. 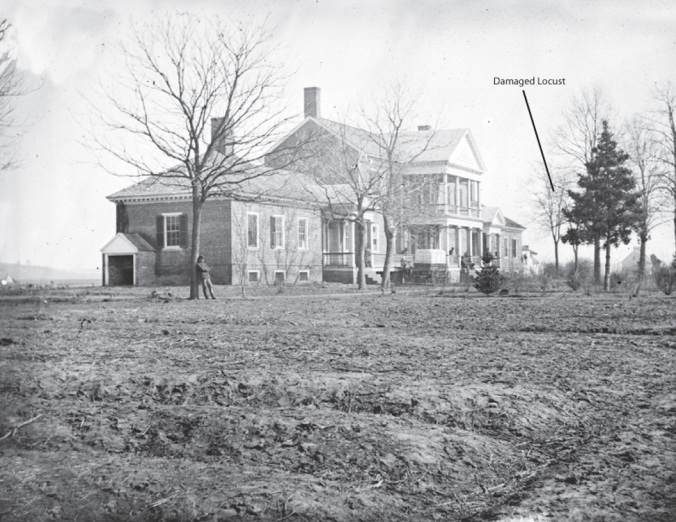