Fredericksburg under Union occupation in May 1862, before the repair of the railroad bridge into town. Looking NW.

One hundred and fifty years ago tomorrow, the Fourth of July dawned in Fredericksburg–a beautiful, clear, breezy day. For eight decades the town had celebrated the nation’s independence; but in 1862, residents in the town passed the day quietly, without notice, their attention drawn more by the news of the massive fighting around Richmond and hopes for their own independence from the now-hated Union. It was a “week of intense anxiety,” wrote Jane Beale. Though buoyed by word of victory, she, like many others in Fredericksburg, feared that death’s tendrils would once again touch the town (Mrs. Beale had lost a son in the Battle of Williamsburg).

A Union officer rode through the streets that morning. He noted there was none of the customary protests from the citizenry. Rather, he said, “Young Virginia was in the dumps,” and he wished to have none of dreariness. “I hurried across the river,” he wrote, “lest I also should be infected with the painful gloom.”

Fredericksburg from the camps of Gibbon’s brigade, in what is today Pratt Park. Many of the events held on July 4 probably took place in this field.

Across that river in Stafford County, the Union army suffered anything but gloom, intent on celebrating the “86th birthday of this great and once happy Republic.” In John Gibbon’s brigade of western troops (later known as the Iron Brigade), men and officers started the day by swapping roles–the officers taking the ranks as privates, and select enlisted men acting as officers. The men rejoiced at the sight of colonels and “other big shoulder straps” policing the camp, “picking up old bones and trash.”

In Marsena Patrick’s brigade of New York soldiers, the day featured a concert, speeches given upon a platform adorned with cedar boughs–purposely reminiscent of Northern forests–and the reading of the Declaration of Independence. Virtually all the batteries with each brigade fired a salute that day–the climax coming at noon, when Monroe’s Rhode Island battery, near the Phillips House, fired a salute of 84 guns. All of this was clearly audible in Fredericksburg, and that of course was partly the point.

But the day’s most notable events came in the afternoon, when games and races broke out all over Stafford Heights. Gibbon’s brigade held a mule race, probably in what is today Pratt Park.

The winner was the mule that crossed the line last, and so men slapped the backsides of others’ mules, which of course caused mayhem. “Before the riders had gone twenty paces, a dozen men were seen flying through the air, heels foremost.” Elsewhere the 20th New York put up a greased pole, which no one succeeded in climbing, and released a pig, newly shaved and lubricated. “It was a great sight to see a whole brigade, nearly four thousand men, chasing one little lone pig,” remembered a man of the 21st New York. After many close calls, a lucky private caught the 125-pound porker and turned him into dinner. The men did all this mindful that the commotion could be clearly heard across the river in Fredericksburg. “I doubt not that but the people of Fredericksburg think the Yankees have revived the Olympic games in their midst,” wrote one man from Wisconsin.

The day ended with yet another 34-gun salute and an elaborate display of fireworks, arranged by General Rufus King. The display “equalled anything of the kind witnessed in the cities,” wrote one man. “The heavens were ablaze with rickets…Roman candles, fire wheels, colored lights, etc.” Some wayward fireworks fell into the town itself. 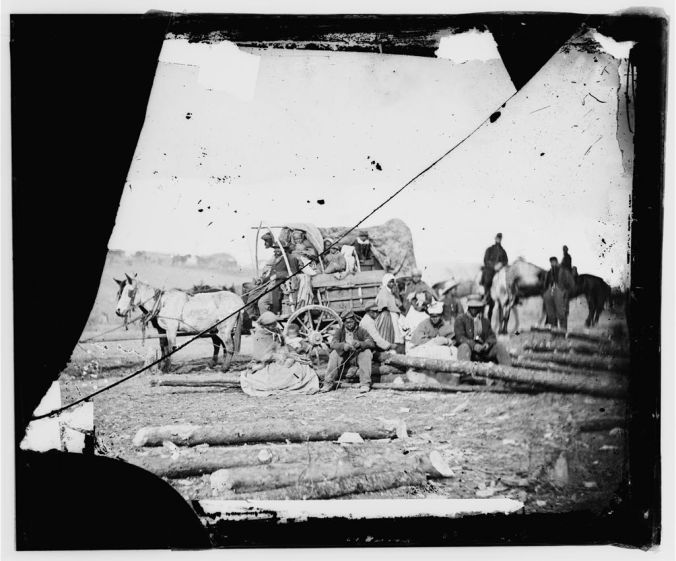 Many men noted that no local civilians turned out to witness the spectacle, except for recently escaped slaves. They reveled with “open-mouthed enthusiasm,” wrote a New Yorker. “To them it was Independence Day indeed.”

The raucous celebration eventually yielded to darkness, quiet, and in a few cases, reflection. A captain in the 20th New York State Militia mused that the celebration was warranted, though admittedly obnoxious: “If ever the Fourth should be observed with throbbing heart…and glowing purpose and enthusiasm, it is now when traitors are aiming and toiling to” destroy the Union. “If ever men should celebrate the day with the rapt ardor of devotees, it is the soldiers of the Union,” bent on “saving the Union of the revolutionary fathers from destruction.”

A soldier from the 2d Wisconsin brooded more deeply: “The past year has been the darkest of our existence and though the government still exists, the footprints of progress are stained with blood. Yet me thinks the waves of discord and the billows of adversity are about spend and the dawn of peace, unity, and prosperity is at hand….All sigh for the once happy country we possessed and long to see her as she was prior to the inauguration of this fratricidal rebellion.”

That man’s optimism would soon be washed away, as his soon-to-be-famous brigade, and his nation, entered a sustained bloodletting that would leave Gibbon’s brigade shattered and a nation wavering under a tidal wave of human suffering.

One thought on “Independence Day 1862: Fredericksburg’s Stark Contrast and Some Fireworks”