We have spent a fair number of pixels looking (deservedly) at the two great images taken by Timothy O’Sullivan of fugitive slaves crossing the Rappahannock River at Cow Ford on August 19, 1862. (Go here for discussion, and here for follow-up.). Often overlooked is that O’Sullivan took at least three other images that day, as John Pope’s Army of Virginia streamed eastward through Culpeper County, retreating before Robert E. Lee’s army. That day, nearly half the army–two full corps–crossed the river on the railroad bridge visible in the background of the slave crossing image. O’Sullivan captured at least part of this historic event in an overlooked but remarkable set of images. Taken together, these images and the slave crossing images clearly demonstrate the nexus between the Union army and freedom in 1862

The three images taken by O’Sullivan appear (from shadows) to be taken at midday. We cannot be certain of the order, but there are hints. Two of the images are taken from the eastern end, looking westward into Culpeper County. Of these, I would guess the image above was taken first. The traffic in the image is fairly light, the background free of ominous dust clouds. It seems to me that this image might capture the initial approach of the army to the bridge–Nathaniel Banks’s Second Corps (later the Twelfth).

To the right, a number of soldiers loiter unaware in timeless poses for young men. On the bridge are the blurred images of wagons.

Based on their profile, they appear to be ambulances (click here for image of ambulances). That would make some sense–the army would likely have sent the sick and wounded back first, and Pope’s army had many in the wake of the Battle of Cedar Mountain, fought ten days before.

The second image shows a bridge busy with traffic.

An army on the move.

It is a remarkable view, showing an army literally on the move. But look more closely. Look at what part of the army is actually moving.

That mass of bovine feet bespeaks a drove of cattle. Civil War armies often transported their meat rations on the hoof. This image shows rations for the army for the next couple of days.

But most interesting of all in this image is in the left background. We often read of the choking dust that accompanied the movement of armies, and here is perhaps the only image taken of an army’s dust cloud, as the columns moved along the road toward the bridge.

It’s easy to imagine how pleasant that might have been.

O’Sullivan took a third image that day, and it may well have been taken first. 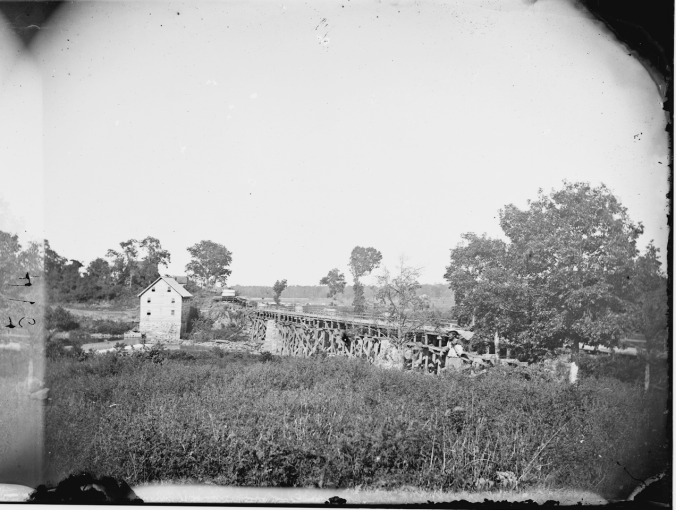 This is a bucolic view, showing the bridge from the Culpeper side, with Martin’s Mill in the background. The mill appears prominently in the photos of the fugitive slaves taken 400 yards downstream that day.

Two things are interesting about this image. First, look at the decking on the bridge.

It was clearly built in a way that would allow passage of both trains and foot and wagon traffic. The rails are flush with the wooden deck, much in the way you would see at a modern rail crossing (which use metal rather than wood decking). This, and most bridges built by the military during the war, were dual-use structures.

Notice too in the background: There is a wagon train moving across the field. It’s a virtual certainty that this train had just crossed at Cow Ford, just downstream, where the slave image would be (or just had been) taken.

Those of us who went to the crossing site on September 22 walked this very field. A small matter, but a nice connection. This is how the field through which that wagon train crossed looks today.

Here is a view of the Rappahannock Bridge site today, taken from downstream at Cow Ford. 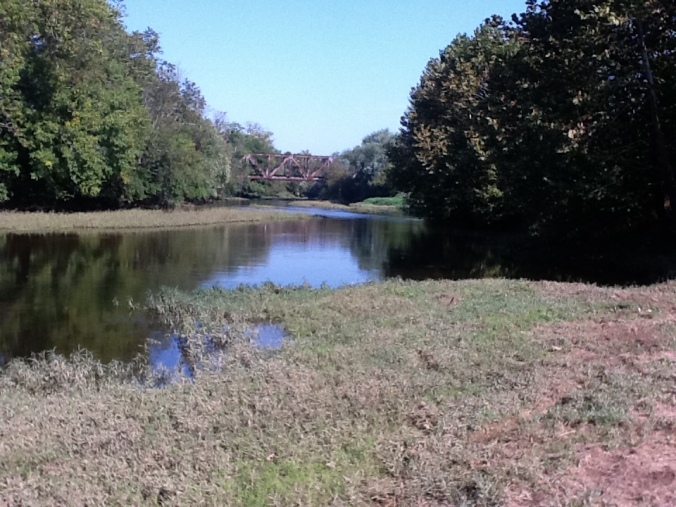 The camera for the first two images was just south of the right-hand end of the bridge. The third view, showing the mill, was taken from the left bank.

A personal note. When I wrote Return to Bull Run, I certainly knew of these images, but their uncommon value never occurred to me, so narrowly channeled was my thinking on structuring a narrative focused on the battlefield. Neither did I use the slave crossing image. In fact, the book largely ignores the relationship of Pope’s army in these environs with the functional end of slavery, an omission common in such books 20 years ago, but regrettable today.

We live and work in a rapidly changing world when it comes to history.

Here’s an aerial view showing the area around the bridge today. 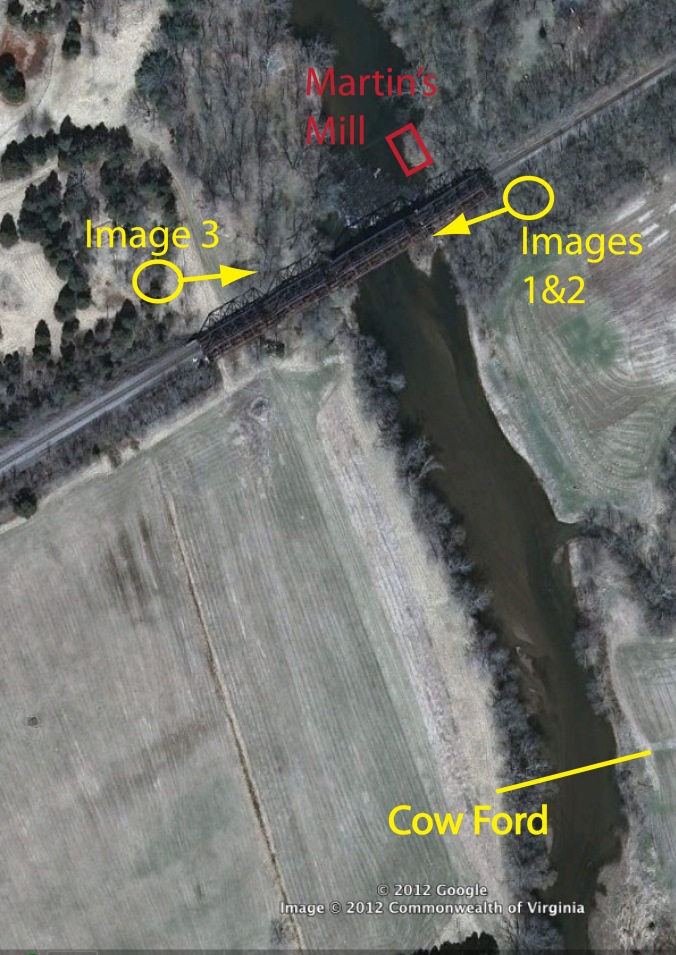 8 thoughts on “Beyond the slave crossing image: the rest of the scene at Rappahannock Bridge–an army in motion amidst dust, August 19, 1862”