It was with a deep sense of relief that I saw the sun go down, and felt that in a little while darkness would put an end to the unequal combat. But for a time the fury of the fire on both sides redoubled as the discovery was made by the combatants that their day’s work was about done. For half an hour, the din was awful, and the smoke drifted through the streets, as sometimes in a city, when there is a high wind and a great dust. There was severe fighting even after dark, and the sparkle of musketry made a fine display. Then the big rebel rifled cannon ceased to mark time, the sputter and crackle of small arms ceased on the centre, Franklin and Jackson’s guns throbbed heavily a few times on the left; and all was still .... (A reporter for the Cincinnati Commercial, quoted in Moore, Rebellion Record, Vol. 6, p. 100) 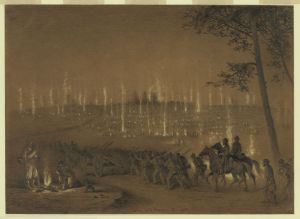 On the picket line, William McLendon, 15th Alabama, There I sat beside my dead enemy in the dark…. While there, meditating over our condition, the thought entered my mind that neither our parents, kindred or friends at home, could draw the picture in their imaginations of our condition and situation at that time. Nothing but the “All Seeing Eye” could do it. I was near enough to the Yankees to hear them cough and clear up their throats. We had no orders to shoot unless they advanced. There was wounded Yankees lying between our lines sending up the most pitiful cries for help I ever heard. Some were calling for water, some calling the names of his friends, but none answered or went to their relief. Neither side could help. The night was cold and there is no telling how some of them suffered. Some of them may have died during the night by freezing.

Those who say they would like to Visit a battle field seldom know what they are talking about.  After darkness Has put an end to the struggle a hush settles over the field    Such a contrast    Such a contrast to the roar of the fight  Never is silence more oppressive more [?]    You hear the cries of the wounded Which is never distinguished in the Roar of battle    A stray shot hurles Through the darkness overhead    you hear the ambulance wheels chur[n] heavily along grinding through the soil with a sullen muffled sound like Some monster craunching [sic] the bones of his victims   you see the outlines of forms gliding through the gloom Carrying on litters pale bloody men    you stumble over perhaps your friend with his hair matted with blood over his White face and his dead eyes starring [sic] blindly up to the sky.  Erskine Church, 27th CT, March 15, 1863

On the night of the second day of the battle there was a singular appearance in the elements, the most singular I ever saw in my life.  Some said it was an Aurora Borealis, or Northern Light, but if it was it was a little different from any I ever saw before.  It rose on the side of the enemy [east] and came up very near parallel with our line of battle, and right over us.  It turned as red as blood, but when it commenced rising it looked more like the appearance of the moon rising than anything else I know to compare it to.  I looked the next day for the bloodiest fight that had ever been, but there  was no fighting other than cannonading….Though there were at the time hundreds and thousands of the slain on the field of battle I could not help but think at the time of this strange appearace that it was a sign of battle, or a sign of the one that had just been fought.  But it might not have been a sign of either.  God only knows best; I am sure I do not.  David Ballenger, 26th Alabama, to Nancy, December 23, 1862

Night of December 14:  Sunday night came with stirring breezes and cold.–The sky became gradually tinged with red; it extended in long pointed streaks of dazzling brightness over half the firmament; and a glorious aurora borealis, like a red shield of honor, hovered over the two armies so lately engaged in deadly strife.  Macon Telegraph, January 2, 1863.

It was very cold and very clear, and the aurora borealis of the night of December [14], 1862, surpassed in splendor any like exhibition I ever saw.  Of course we enthusiastic young fellows felt that the heavens were hanging out banners and streamers and setting off fireworks in honor of our victory.  Robert Stiles, Four Years with Marse Robert, p. 137.