In two previous posts, found here and here, I looked at two early exhibits of Fredericksburg relic collections – the Cotton and Hills collection (1887-1891) and the Jacobs-Agan collection (1891-1907). Elmer Agan put his collection in storage in 1907, after which no public displays of Civil War artifacts existed in the town. A 1912 newspaper editorial calling for the creation of a museum to display such items in Fredericksburg was met with silence. Although local interest remained, the museum idea went dormant and did not resurface until late 1927.

Reverend Richard V. Lancaster of the Presbyterian Church created the spark that brought the concept of a local museum once again to the attention of both city officials and the public. In an open letter to the Fredericksburg City Council, published in the The Free Lance-Star, Reverend Lancaster urged the city to:

“establish a Museum for permanent safe keeping of historic relics in which the community abounds. In almost every home there are souvenirs of war, now carefully regarded, but which in the future will become of increasing value.

I am sure that if you will do this you will have achieved a thing of real permanent value to Fredericksburg and Virginia, for which coming generations will be grateful.” – “An Open Letter of Request,” The Free Lance-Star, December 8, 1927

Reverend Lancaster suggested the use of a room under City Hall. He noted that the city used the room for storage and that it could easily be adapted for exhibit space. His suggestion brought action. Before the end of the month, the Chamber of Commerce established a committee to look into the idea. This working group included representatives of local historical and fraternal organizations. Its chairman was Dr. Joseph N. Barney, a local physician. The group held a meeting on January 5, 1928, at which many ideas and plans were discussed. In the end, it proposed that a museum building be constructed at Hurkamp Park. The committee felt the city should fund the project and that the museum “would be this city’s donation to the National Battlefield Park.” The Fredericksburg & Spotsylvania National Military Park had been created just a year earlier and had yet to acquire or build any visitor facilities. The idea sounded good to those involved, but in the end the city chose not to pursue the project. For some members of the committee, the idea of a museum in the city deserved another look to see what alternatives to municipal funding might exist.

Dr. Barney, the museum committee chairman, enlisted the assistance of one of his colleagues, Dr. William J. Chewning. Like Dr. Barney, he was a respected physician in town. A native of Fredericksburg, Chewning came from an established local family. His father, Dr. George H. Chewning, practiced dentistry in the city. Young William attended local schools and graduated from the University College of Medicine in Richmond, Va. He returned to Fredericksburg and along with Dr. Barney became an early member of the Mary Washington Hospital staff. He joined the army in 1917 and received a commission as a 1st Lieutenant in the Medical Corps, serving stateside in Baltimore, Maryland and at Fort Oglethorpe, Georgia. By 1928, Chewning was married, in private practice and raising a family in a home on the 400 block of George Street in downtown Fredericksburg.

END_OF_DOCUMENT_TOKEN_TO_BE_REPLACED

This begins a three-part post that will look at early collectors and exhibits of Fredericksburg’s Civil War history.

An earlier post, found here, took a look at Fredericksburg’s Museum of War Relics (1887-1891). The museum was actually a room in the Exchange Hotel that contained displays of Civil War relics and artifacts. Leander Cotton and William A. Hills ran the hotel and owned the collection. Their museum marked the first effort within Fredericksburg to display artifacts associated with the area’s Civil War history. The Cotton and Hills collection proved to be a good draw for the hotel and an early attempt to capitalize on toursim generated by the local battlefields. When the two men left the hotel business in 1891, they sold the collection to a Union veterans’ organization in Massachusetts. It wasn’t long, however, before another Fredericksburg merchant assembled his own impressive collection of war material and put it on display in his store. Like the Cotton and Hills collection, it too became an attraction with both local citizens and visitors to the area.

Bernard H. Jacobs emigrated from Prussia in the early 1860s and first settled in Richmond, Virginia. From there, he moved to Orange, Virginia and then on to the west coast. He returned to Virginia, finally making Fredericksburg his home in 1878. Jacobs opened a clothing store at 821 Main (Caroline) Street and for nearly forty-four years his store was, according to a local newspaper, “regarded as one of the city’s business landmarks.” 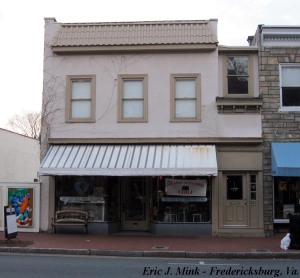 The site of Jacobs’s store at 821 Main (Caroline) Street is occupied by this commerical  building.

END_OF_DOCUMENT_TOKEN_TO_BE_REPLACED

This post is adapted from an article I authored for Volume 10 (2011) of Fredericksburg History & Biography, an annual publication of the Central Virginia Battlefields Trust.

It is nearly impossible to open a book about Civil War Fredericksburg without seeing the photo of Confederate soldiers posing on the ruined railroad trestle along the Rappahannock River. The photo represents one of only two instances in which a Northern artist photographed as his subjects non-captive Confederate soldiers of the Army of Northern Virginia in the field. (The other instance involved Confederates marching through Frederick, Maryland.) That alone makes it an unusual image, yet the ability to identify the previously anonymous soldiers makes this photo even more remarkable.

The Union photographer captured this scene from the north bank of the Rappahannock River. The Confederate soldiers stand on the south bank with the river flowing between the artist and his subjects. They are on the literal front line of the war. This is a location that should be hostile, yet the Confederates don’t appear to pose a threat. Their casual pose and the absence of visible weapons suggest an almost friendly demeanor. We know that the site of the ruined railroad bridge was a place where the opposing pickets and outposts gathered to fraternize, exchanging newspapers as well as insults. (For an earlier discussion of this location, see John Hennessy’s post here.) When the photographer appeared at the bridge, we can assume some communication must have taken place between the cameraman and the Confederates. The relaxed gathering at the far end of the bridge suggests cooperation between the man behind the camera and his subjects.

Many of us have studied this image in great detail. We know its location. We can see in the distance the buildings, Willis Hill cemetery and defenses upon Marye’s Heights. We even know the name of the photographer – Captain Andrew J. Russell of the United States Military Railroads. (At least one historian has suggested that the photographer may have been Egbert Fowx, Russell’s mentor). What we have not known, however, are the identities of the figures on the far side of the river. We can’t help but wonder who these men are that posed so calmly for a Yankee cameraman along a boundary between the warring armies? To date, no diary or letter has been found, by either a Union or a Confederate soldier, that recalls what must have been an event worth chronicling, or at the very least worth mentioning.