In two previous posts, found here and here, I looked at two early exhibits of Fredericksburg relic collections – the Cotton and Hills collection (1887-1891) and the Jacobs-Agan collection (1891-1907). Elmer Agan put his collection in storage in 1907, after which no public displays of Civil War artifacts existed in the town. A 1912 newspaper editorial calling for the creation of a museum to display such items in Fredericksburg was met with silence. Although local interest remained, the museum idea went dormant and did not resurface until late 1927.

Reverend Richard V. Lancaster of the Presbyterian Church created the spark that brought the concept of a local museum once again to the attention of both city officials and the public. In an open letter to the Fredericksburg City Council, published in the The Free Lance-Star, Reverend Lancaster urged the city to:

“establish a Museum for permanent safe keeping of historic relics in which the community abounds. In almost every home there are souvenirs of war, now carefully regarded, but which in the future will become of increasing value.

I am sure that if you will do this you will have achieved a thing of real permanent value to Fredericksburg and Virginia, for which coming generations will be grateful.” – “An Open Letter of Request,” The Free Lance-Star, December 8, 1927

Reverend Lancaster suggested the use of a room under City Hall. He noted that the city used the room for storage and that it could easily be adapted for exhibit space. His suggestion brought action. Before the end of the month, the Chamber of Commerce established a committee to look into the idea. This working group included representatives of local historical and fraternal organizations. Its chairman was Dr. Joseph N. Barney, a local physician. The group held a meeting on January 5, 1928, at which many ideas and plans were discussed. In the end, it proposed that a museum building be constructed at Hurkamp Park. The committee felt the city should fund the project and that the museum “would be this city’s donation to the National Battlefield Park.” The Fredericksburg & Spotsylvania National Military Park had been created just a year earlier and had yet to acquire or build any visitor facilities. The idea sounded good to those involved, but in the end the city chose not to pursue the project. For some members of the committee, the idea of a museum in the city deserved another look to see what alternatives to municipal funding might exist. 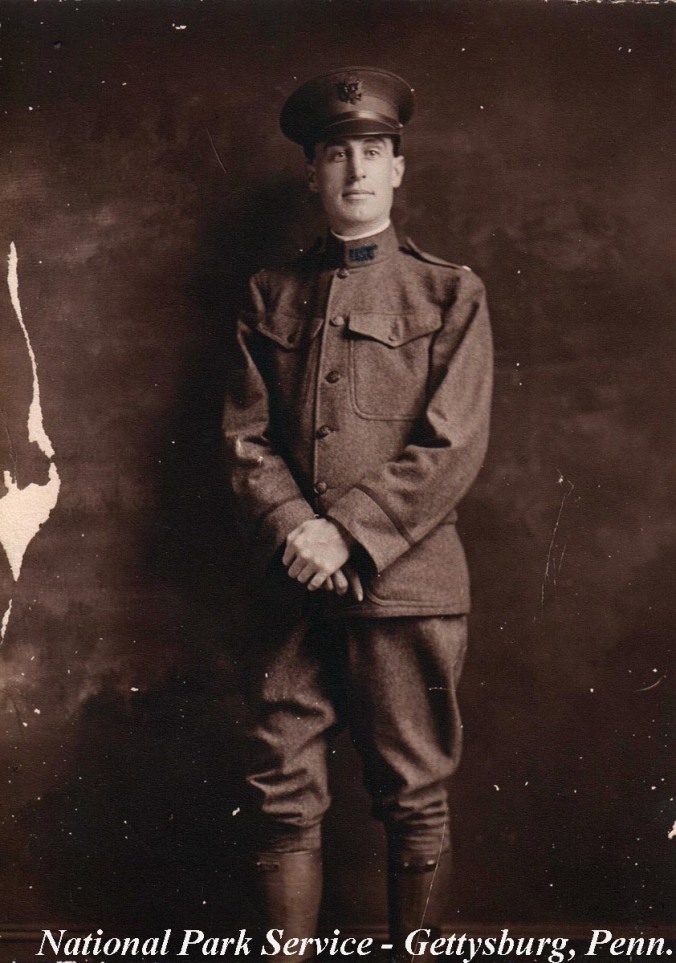 Dr. Barney, the museum committee chairman, enlisted the assistance of one of his colleagues, Dr. William J. Chewning. Like Dr. Barney, he was a respected physician in town. A native of Fredericksburg, Chewning came from an established local family. His father, Dr. George H. Chewning, practiced dentistry in the city. Young William attended local schools and graduated from the University College of Medicine in Richmond, Va. He returned to Fredericksburg and along with Dr. Barney became an early member of the Mary Washington Hospital staff. He joined the army in 1917 and received a commission as a 1st Lieutenant in the Medical Corps, serving stateside in Baltimore, Maryland and at Fort Oglethorpe, Georgia. By 1928, Chewning was married, in private practice and raising a family in a home on the 400 block of George Street in downtown Fredericksburg.

Chewning maintained a strong interest in the Civil War. Both his father and uncle had served in the Confederate army. Since the age of ten, Chewning collected Civil War relics. He had amassed quite a collection by the time Dr. Barney approached him about the local museum. Barney expressed concern about the potential sale of the Jacobs-Agan Collection. It had been in storage since 1907 and apparently a potential buyer from outside the area had his eyes on the collection. Through Barney’s urging, Chewning bought the collection in July 1929 in an effort to keep it in Fredericksburg. After years locked away, the collection of over 62,000 artifacts appeared to represent little more than a pile of junk. A newspaper later described Chewning’s new acquisition as “hauled to his house in two five ton trucks, the boxes opened and the whole pile dumped into a cellar room.” Chewning hired Harry Bankard, a Spanish-American War veteran, to clean up the pieces. The paper reported the collection contained “2,000 bits, hundreds of spurs of all kinds, hundreds of bayonets and one of the largest and most varied assortment of swords in existence…about every kind of gun carbine, bullet and cannonball used…and every other imaginable article used in the war…” All combined, Chewning’s personal collection now numbered over 80,000 relics. Amassing this collection of relics proved to be only the first part of the project. Now Chewning wanted to share his prized artifacts with his fellow citizens as well as the visiting public. 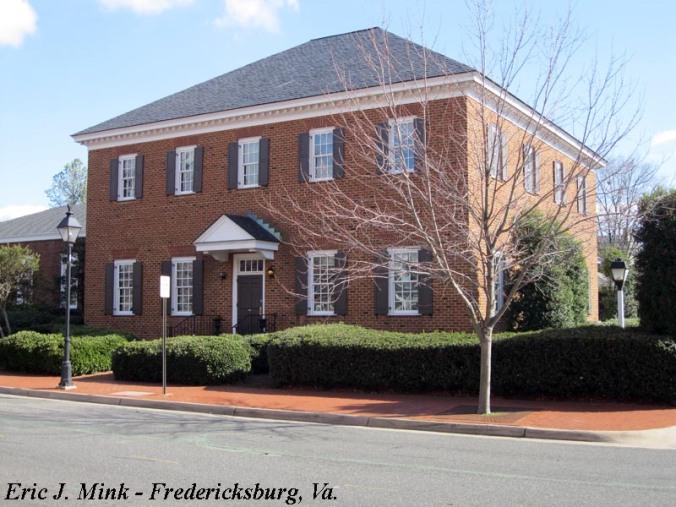 Chewning’s home and the National Battlefield Museum were located at the corner of George and Prince Edward Streets. Today it is the site of the Fredericksburg branch of BB&T Bank.

Dr. Chewning opened the National Battlefield Museum on August 19, 1929. He displayed his collection in three rooms in the basement of his home at the corner of George and Prince Edward Streets. Cases held many of the artifacts, while others hung on the walls and stacked muskets occupied floor space. Chewning charged a nominal admittance fee, which he hoped would help to offset the interest charged on his investment. Among the impressive artifacts on display were a sash worn by Confederate General J.E.B. Stuart, a Confederate jacket worn by a Louisiana soldier, and clocks and furniture picked up from the streets of Fredericksburg following the December 1862 battle. Perhaps the jewel of the collection was the table upon which Confederate General “Stonewall” Jackson’s arm had been amputated at Wilderness Tavern in Spotsylvania County. On the day the museum opened, the local paper assured its readers that Chewning promised to keep the collection local.

“…he would not sell the collection away from Fredericksburg and that he bought it mainly because he did not want to see these war mementos, which could never be duplicated, sent out of this city or destroyed by lack of care or rust, and would see that they were carefully preserved for the future.” – “War Collection Open to the Public,” The Free Lance-Star, August 19, 1929 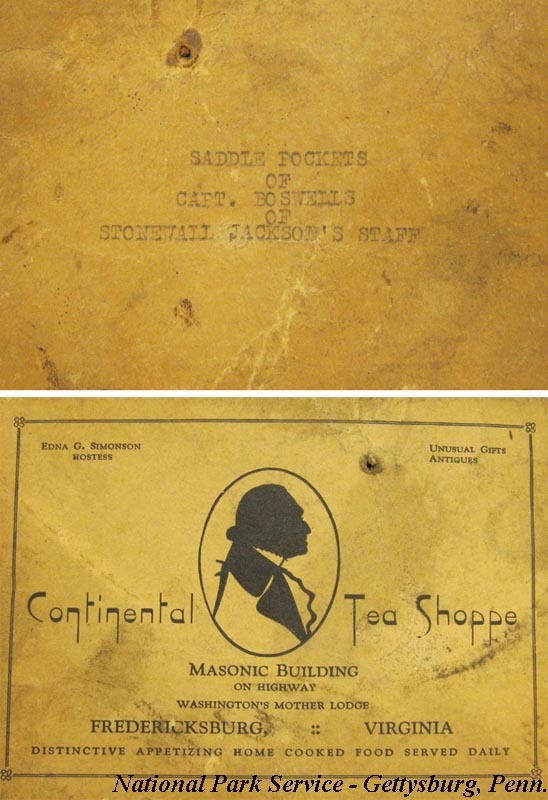 An artifact label from Chewning’s National Batlefield Museum. The label is typed on the back of a local merchant’s advertisement card. 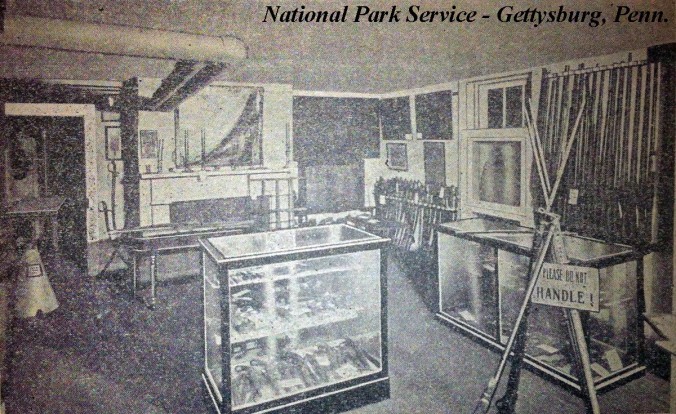 One of the display rooms in Chewning’s National Battlefield Museum.

Almost from the beginning, Dr. Chewning felt the strain of operating his museum. He confided in letter written to a cousin less than a year after opening the museum:

“it has been most hard upon me, keeping things going, for I have to not only run my house and do some practice – but have my light interests and this huge collection of Civil War relics. I undertook this extra interest because I saw that these things were going to be lost to this Battle-field section, for ever…so I bought and saved these rare relics, for the City. Many thought I did the right thing, but none of those would put up any of the thousands necessary to buy it. I hope in time it will pay running expenses.” – Letter, dated January 3, 1930, Dr. William J. Chewning, letter to C.C. Chewning, Museum Collection, Gettysburg National Military Park 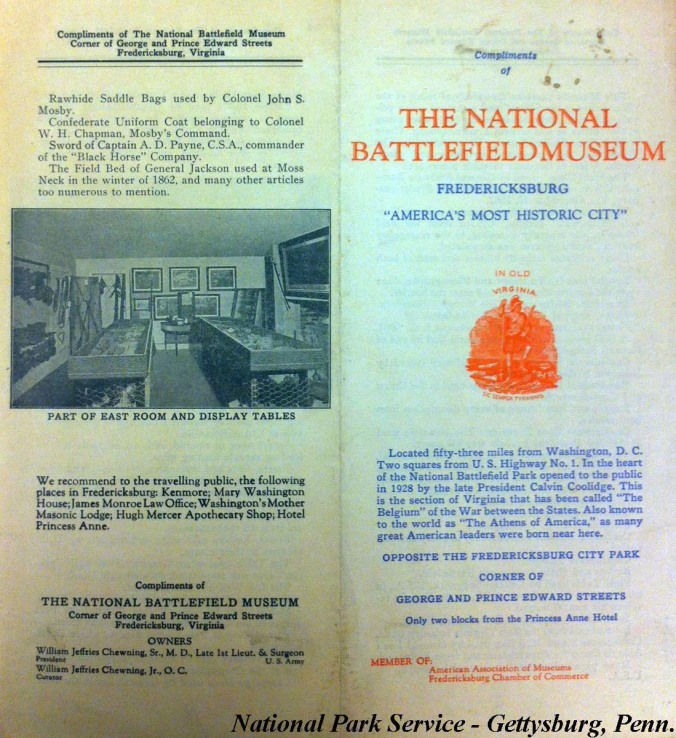 One of Chewning’s advertising brochures for the National Battlefield Museum.

As early as 1933, Chewning sought another steward for the collection. He contacted his congressional representative, S. Otis Bland, in an effort to see if the federal government had interest in acquiring the contents of the museum. Bland referred the inquiry to the National Park Service, who in turn passed it on to the Fredericksburg & Spotsylvania NMP. Historical Technician George A. Palmer visited the museum, studied the collection and reported back. While NPS Director Arno B. Cammerer expressed interest in Chewning’s collection, he admitted that the local park did not have a suitable space or building to display the artifact. (The NPS did not begin construction of the Fredericksburg Museum and Administrative Building, now known as the Fredericksburg Battlefield Visitor Center, until 1935). Additionally, Cammerer admitted that funds just were not available to purchase Chewning’s collection. 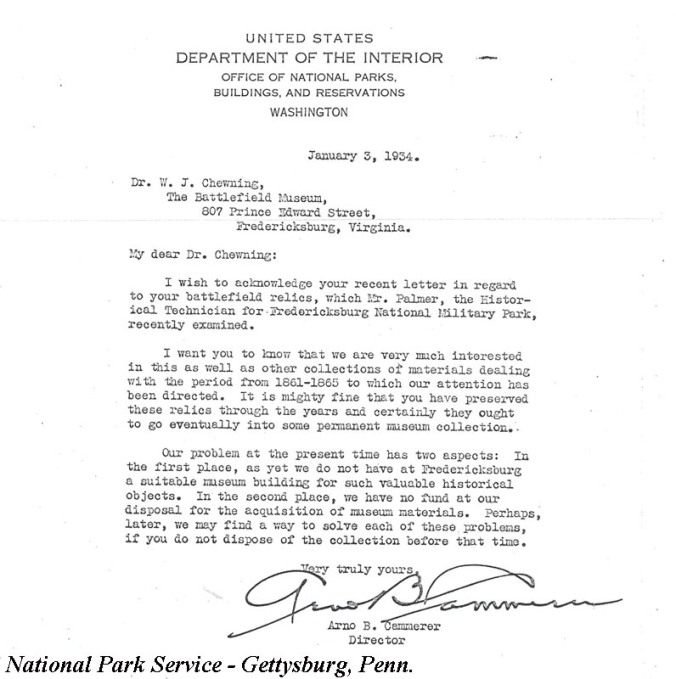 The letter in which NPS Director Arno B. Cammerer declined the acquisition of the Chewning Collection.

Chewning also apparently engaged the City of Fredericksburg about buying the collection, but to no avail. Chewning kept the museum open, all the time hoping to find someone to take over the collection. All the while, he dealt with failing health. On October 28, 1937, Dr. William J. Chewning passed away at Walter Reed General Hospital in Washington, D.C. He was 60 years old. Reverend Lancaster, who got the whole local museum idea rolling with his open letter to city officials in 1927, conducted the services. Dr. Chewning is buried in the Fredericksburg National Cemetery. 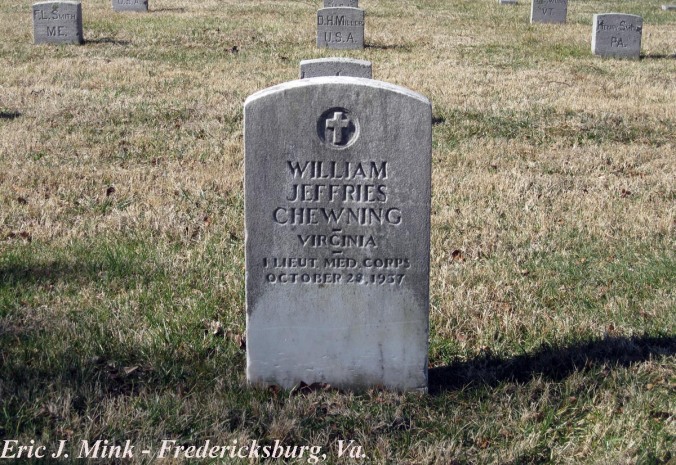 With Dr. Chewning’s death, the museum passed on to his wife and his son, William J. Chewning, Jr. While Dr. Chewning had maintained his stance to keep the collection in Fredericksburg, options for doing so became increasingly limited. His heirs continued the search to find a new home for the collection, but could not find any local buyers. In 1938, the Chewnings sold the contents of the National Battlefield Museum to a collector outside Fredericksburg. Over the next twenty-five years, the collection traversed the United States before finally finding a permanent home. The Chewning Collection’s journey can be found here in Part 2.

It should be noted that the first historians to look at early Civil War relic collecting, to include the Chewning Collection, were Stephen W. Sylvia and Michael J. O’Donnell in their wonderful 1978 book The Illustrated History of American Civil War Relics (Orange, Va.: Moss Publications).

Thanks to Paul Shevchuk, Museum Technician at Gettysburg National Military Park, and to Nancy Moore, librarian in the Virginia Room of the Central Rappahannock Regional Library, for allowing me to thumb through their research files.