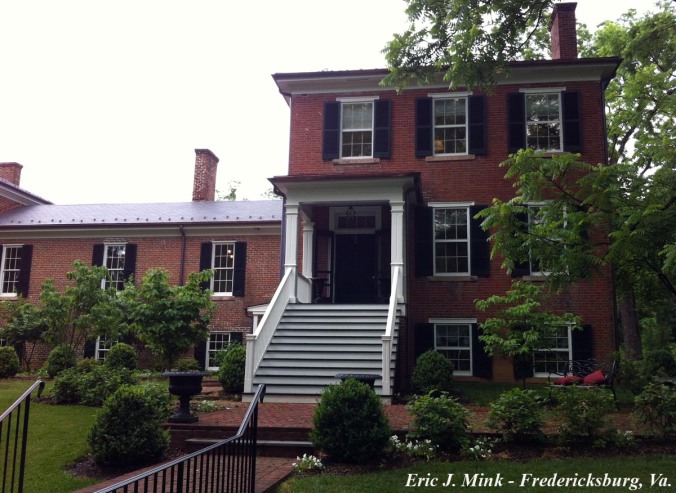 Most visitors to the Fredericksburg Battlefield pass “Braehead” when driving the park auto tour. The antebellum home sits along Lee Drive, between Tour Stops 3 and 4. The majority of travelers along this stretch of the tour road probably don’t notice the house, as it is screened by trees and lacks any markers or interpretive signs. Braehead is, however, a significant battlefield landmark and is one that still bears scars from the intrusion of war in the 1860s.

John Howison built Braehead in 1859 as the home for his family, which included his wife Ann and seven children. The home is built of brick with a raised basement and a unique plan comprised of two two-story sections connected by a single-story central structure. Howison used salvaged brick from buildings already standing on his property to reduce construction costs, which totaled $15,000 when finished. During the Civil War, Braehead became a refuge for locals during various Union occupations of Fredericksburg. The house and property sat in the middle of the Confederate defenses for both the first and second battles of Fredericksburg. Rising south and west of Braehead is Howison Hill, upon which Confederate artillery shelled advancing Federal troops. During the May 1863 battle the Union lines swept across the Howison farm on their way to the crest of the heights behind the house. Other notable events that occurred at Braehead during the war included Robert E. Lee’s having breakfast at the house prior to the December 1862 battle, Confederate use of the building to conduct courts-martial, as well as the housing of wounded following fighting in the area.

Sketch made by Albert A. Carter of the 4th Vermont Infantry. The scene depicted is the successful Union attack against Lee’s Hill on May 3, 1863. Braehead can be seen to the left of the advancing battle lines.

On May 8, 1864, General George Meade directed that the town of Fredericksburg become the hospital site for the Union forces engaged in the battles of the Wilderness and Spotsylvania Court House. Thousands of wounded soldiers passed through Fredericksburg on their way to hospitals in Washington, D.C. Protecting the lines of supply and communication that stretched from Belle Plain in Stafford County through Fredericksburg and to the Union army in the field was a garrison of regiments under the command of General John J. Abercrombie. For two weeks, Abercrombie’s command protected the ambulances and supply wagons, as well as the depots at Belle Plain and Fredericksburg. Mary Howison, John’s niece, later wrote of the Union presence at Braehead during this period:

“In 1864 the Northern Army took possession of the house and farm. They burnt the good brick barn, killed the cows, ate the chickens, smashed the china, tore up dress goods, destroyed or stole the family Bible which had in it already three generations. In a joking spirit they paraded around in a dozen beaver hats which Uncle John had stored up, prodded the floors and folding doors with bayonets, threw the dining room chairs through the window glass and wrote their names and initials in various places. The wonder is more mischief was not done but the five-year old house made sturdy resistance with its strong material and workmanship.” Mary Howision, “Braehead,” copy in FRSP files.

Some of the graffiti Mary Howison mentioned survived into the 21st century. It belongs to two soldiers who served with the 22nd New York Cavalry. This regiment was attached to General Abercrombie’s command at Fredericksburg. Carved into the door frame of a room off the entrance parlor are the letters “EWM Co H XXII.” This is the work of Sergeant Edmund W. Merrill, who enlisted at Huron, New York on December 30, 1863. He mustered into Company H as a sergeant on February 2, 1864. His time with the regiment lasted just short of a year, as he transferred to the 1st Company, 2nd Battalion of the Veteran Reserve Corps on November 4, 1864. His military service ended with his discharge on July 24, 1865.

As late as 2003, additional graffiti could be found on the plaster of the basement wall. In pencil was scrawled “D.H. Dickinson – Co. G 22d NY Cavalry – May 26th 1864.” Private David H. Dickinson, whose military service began as a member of the 23rd New York Infantry, left this reminder. On January 16, 1863, Dickinson enlisted in the cavalry at Bath, New York. He mustered in as a private in Company G of the 22nd New York Cavalry and mustered out of service on August 9, 1865. Unfortunately, Dickinson’s graffiti has not survived. Likely due to moisture and humidity issues in the Braehead’s basement, the writing has disappeared from the wall. Photographic documentation is all that remains of Dickinson’s visit to Braehead. 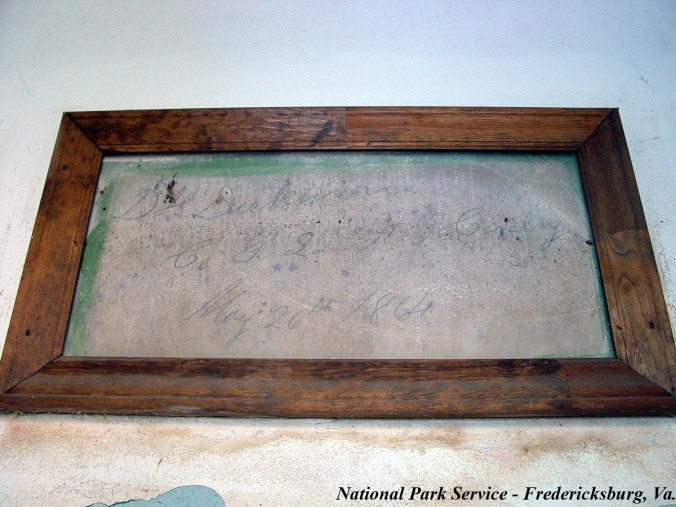 Braehead remains a private residence and is not owned by the National Park Service, although the house and property is within the park’s authorized boundary. Descendants of John Howison owned and lived at Braehead until just a few years ago. In 2006, the Central Virginia Battlefields Trust (CVBT) acquired an option to purchase Braehead and 18 acres. An historic easement, held by the Virginia Department of Historic Resources, was placed on the house and grounds and in 2008 Braehead was sold to Rob and Diana Almy. From time to time, the Almys have opened the home to the public, such as last year’s Candlelight Tour of Historic Homes hosted by the Historic Fredericksburg Foundation, Inc. Rob and Diana have done a wonderful job of restoring and rehabilitating the house and property to include arresting drainage and moisture problems around the basement. The next time you’re traveling south on Lee Drive, glance to the east as you begin your ascent of Howison Hill and you’ll catch a glimpse of Braehead.

Thanks to Rob and Diana Almy for the care they have shown Braehead and for allowing access to their home.

One thought on “If these signatures could talk…”: Braehead Graffiti”