It’s one of the Civil War’s most poignant series of images: photographs of a burial crew in Union-occupied Fredericksburg in May 1864. The men they inter are casualties of the battle of the Wilderness and, possibly, of Spotsylvania Court House as well. I can’t imagine a more powerful visual accompaniment for reflecting upon the war during the final weeks of its sesquicentennial. And I can’t imagine a more compelling mystery: in Grant and Lee: the Virginia Campaigns 1864-1865 (1983), historian William A. Frassanito noted that identifying the location of the series remained to be accomplished.

Here’s one of its images (with my slight cropping for clarity)—the photo that I relied upon most extensively during the trial-and-error research described below: 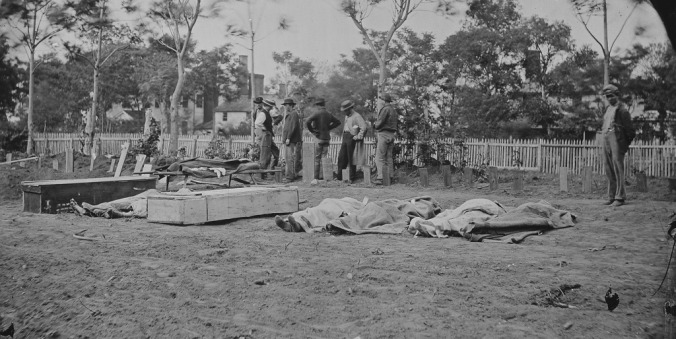 I’ve studied the set of photos intermittently but closely since 1989, and shared interpretations of it in 1995 in a book and, three years later, in an article in the November-December 1998 issue of Military Images magazine. Although I still believe that the site that I identified and published in 1998 is the correct location for the series, much of my experience in reaching that conclusion (and in discarding the theory I had published in 1995) illustrates the limited shelf-life of my own historical interpretations.

During a three-week period beginning on May 8, 1864, Fredericksburg housed more than 26,000 wounded and sick soldiers—the ghastly harvest carried in from battlefields to the west and southwest. Many of these men never left the town; images of some of their shrouded bodies were made by cameramen at a temporary cemetery someplace on the edge of a Fredericksburg neighborhood. Frassanito’s book discussed seven photographs of the cemetery, images that he found in the collections of the Library of Congress and the National Archives. Here are four more of the seven (also cropped for the purposes of this blog post):

At least two rows of new graves and headboards are shown, as well as bodies awaiting interment. Frassanito attributed the camera work to Andrew J. Russell and at least two photographers employed by Brady & Company, and dated the seven images to May 19 or 20, 1864. Early prints bore the caption “Burying the Dead,” or variations on those words (and on the army-affiliation of the soldiers being interred); the series would occasionally be misdated to December 1862 when its component photos appeared in books predating Frassanito’s.

Frassanito was unable to locate the site of the temporary cemetery but noted that the large house that appears in the background could be essential to the search. He speculated that it may have been demolished sometime after the war. Inspired by Grant and Lee’s challenge, and more hopeful of the survival of the house, I eventually developed some ideas about its identity and thus about the location of the burial photos.
END_OF_DOCUMENT_TOKEN_TO_BE_REPLACED