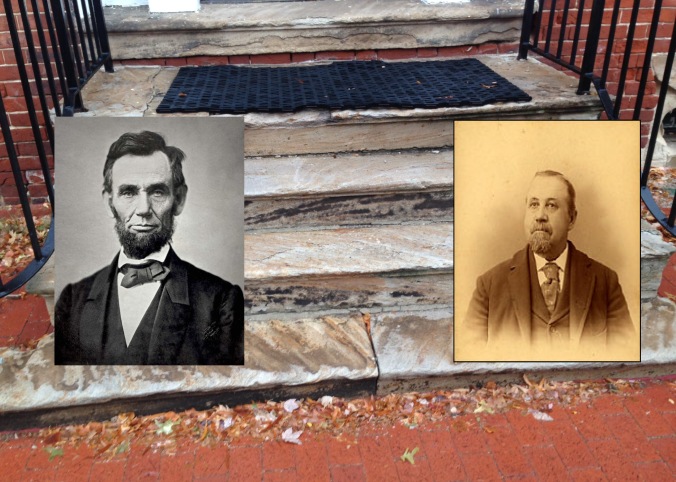 Abraham Lincoln spent an afternoon in Fredericksburg, on May 23, 1862.  We know his route through town, we know what he saw, we know some of the people he met.

But at only one spot we can place him in our mind’s eye with certainty: the former Farmer’s Bank/National Bank building, at the corner of George and Princess Anne Streets.  More specifically, it’s easy to imagine him on these steps–the steps to the George Street entrance (which led to the portion of the building used a residence, and likely as offices by the Union occupiers.)

Prior to his ride out George Street to Marye’s Heights that day, Lincoln perhaps walked these step.

Five weeks before, on Good Friday, Fredericksburg slave John Washington also walked  down these steps, though he had done so probably thousands of times, for he lived in the bank building with his owner. Washington’s trek down the steps that Good Friday was, for him, momentous. The Union army had arrived across the river that day; Washington had returned to his mistress’s house; she urged him to flee to the south, “so as to keep away from the Yankees.”

John Washington replied, “Yes Madam.”  He then opened the door to the spring day outside and walked down these steps. In so doing he passed from slavery to freedom–the exercise of his own free will. He walked down the hill to the Rappahannock River and soon passed across into Union lines, to freedom.

Fredericksburg is full of small, common places with immense associations.