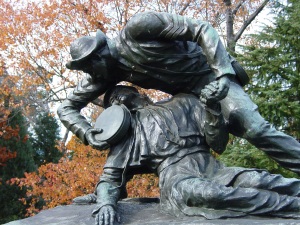 for the Free Lance-Star’s coverage of yesterday’s events marking the 153d anniversary of the Battle of Fredericksburg.  I expect someone will be publishing Scott Hartwig’s excellent keynote address soon, and when they do we will publish the link.

In the meantime, here are my remarks.

We are, as I often say,  a remembering people….

153 years ago to at this minute, what were then the open fields around us swarmed with men struggling against death. Alternately terrified and determined, they struggled amidst a world none of who have not been in it can ever really know.

They struggled with that timeless conflict between the commitment to principle and duty and the universal desire to be home and safe.

As the battle raged, back on the edge of town one man—a strong, powerful man–approached his captain and announced simply,

“No. But I can’t go. I have a family at home, and I must support them. If I go over there I will be killed.”

And then the strong man commenced to cry….

Perhaps more so than any battle of the Civil War, the men who stood on the precipice of battle here at Fredericksburg understood the grim, even hopeless horrors that awaited them.

They knew this, and still they came…..

We are awed by that.

We are a remembering people, and we also remember that 153 years ago tomorrow, Richard Kirkland, a young man from South Carolina, decided to climb over this stone wall to help the wounded that lay all around us. Union wounded.

We remember as well that nine months later, this man died in battle at Chickamauga, giving his life for a cause he clearly believed in deeply.

We are a remembering people. We remember as an expression of respect to those who confronted struggles, horrors, and deprivation that we can only imagine.

We find great comfort in the virtues of our forebears.

We are a remembering people….

But while are a remembering people, we are often a forgetful nation.

We often choose to see the deeds of our forebears merely as examples of our national character.

Instead, they were actors in our national journey.

At every moment, a nation faces choices. Sometimes they are mundane…changing course by a few, almost imperceptible degrees. At other times, the choices are momentous—they define us a people, as a nation.

No event in our history more vividly reflects one of those moments of choice than the Civil War.

Some would say we stand at such a critical moment today. Time and events will tell.  I will say this:  If ever there was a time when Americans needed a clear understanding of history now is it.

Be it then or now, at such times, fear, morality, courage, ignorance, wisdom, self interest, and national interest swirl together, tumultuously–in the case of the Civil War, violently.  In the end, our nation chooses.

Messy though it is, it’s a process that translates the sentiment of the people into the path for a nation—the constitution, laws, policies, and traditions that define our nation and its course into the future.

These men on this field knew well—far better than we give them credit for—the choices at stake that winter of 1862:  that they by their actions would help set the nation’s path.

And so we gather here today.