This post is the third in a series exploring the details of the murder of a Fredericksburg shopkeeper’s brother, attacked on the night of May 25, 1865, by soldiers of the Army of the Potomac’s Sixth Corps on their way home from war. Part one can be found here, and part two is here.

WARNING: Graphic language from original documentation used in this post

As the court martial trial of James Lynch and William Irvin progressed, Lynch had set up fellow-soldier John Wilson as the man responsible for throwing bricks at shopkeeper Charles Milller and his brother George, fatally injuring George Miller. Wilson had not put up a convincing defense, and both the attacker and the details of that dark night’s events remained clouded in mystery, until the next witness—a source more likely to be overlooked than trusted—took the stand.

As Doctor Galland rose to testify, he must have presented both an unusual figure on the stand and a deep surprise to the soldiers on trial. Galland was an African American camp servant and cook in the employ of accused soldier Amos Fielding, and he stood in the unique position of being able to relate the words and actions of the accused in the immediate aftermath of the incident.

Like countless camp servants serving the Army of the Potomac, Galland’s background and future remain a mystery (but will hopefully manifest in enough detail for another post someday),and he held little to no status, perhaps a former slave escaping to freedom as contraband or a free man looking for work. However, as he was sworn in on June 2, 1865, Galland’s story had the power to clear a man’s name and reveal the threads of guilt among the accused soldiers. Through the words of his testimony, we perceive a man who was perhaps not well-educated but was courageous enough to speak of his experiences with clarity and determination.

On the evening of May 25, lying on a pallet in the upstairs room members of the 61st Pennsylvania were occupying in downtown Fredericksburg, Doctor Galland saw his employer, Amos Fielding, return from the streets of Fredericksburg with another soldier. Next to Galland was a friend named Mr. Stevens, whose identity is unknown but could have been a fellow camp servant. Both of their rests would be short-lived.

Galland testified to Fielding’s companion’s actions as he entered the room: “He jerked my Kiver off me & kicked me. Then Mr Fielding told him not to do that I was his cook. He said G_ D_ the Nigger, he aint no more than no other d-n nigger. Mr Fielding told him by God dont he do that no how and he said he dont care about no d-d nigger.”

There is no known record of how long Galland had served Amos Fielding, but Fielding clearly showed some loyalty in defending his cook, though it seems a half-hearted attempt. The soldier who accompanied Fielding showed nothing but contempt for Galland, swearing at and kicking him in order to procure better sleeping arrangements.

After this vicious treatment of Doctor Galland, Fielding and the assailant settled in to sleep, talking together when Galland fell asleep. The next morning, Galland woke to hear them continuing their conversation: “Mr Fielding he asked the man what he was going to say says he by God I aint going to know nothing about it. Then Fielding said you aint going to know nothing about it. He said no. Mr. Fielding said By God we gave him his dose, we fixed him.” 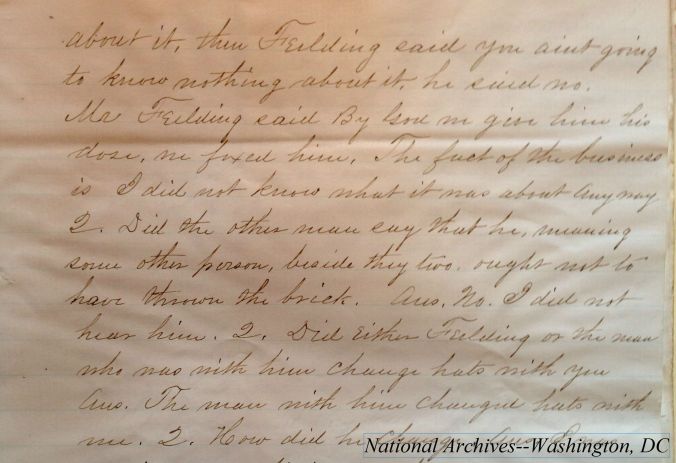 The court record of Doctor Galland’s testimony of Fielding and his fellow soldier’s morning conversation and the trading of hats.

In the context of the evening’s events, these words were far from innocent musings. Shortly after he overheard this conversation, Galland testified that Lieutenant Russell of the Provost Guard climbed the stairs to the room, and Fielding and his fellow soldier ducked into a side room away from the lieutenant. Russell announced that he knew who was responsible for the events of the night before and that he wanted everyone to get up and put on their hats.

Once Lieutenant Russell went back downstairs, the two soldiers came out of the side room. Fielding changed hats with a sergeant. Fielding’s comrade took Galland’s hat and left his, a black “hat with cross seams.” Galland’s friend who had laid beside him that night, Mr. Stevens, warned him that Fielding and the other soldier were accused of breaking into a shop, so Galland may not want to wear the newly exchanged hat. Galland took the advice, and when he appeared in front of the lieutenant bare-headed, he admitted that the other man had taken his hat.

Lieutenant Russell could draw reasonable conclusions from Galland’s story, and it must have proved galling to the soldiers to be given away by an individual they considered quite beneath their status. Intimidation against Galland continued to the very day of the trial, when William Irvin, standing trial alongside Amos Fielding, said to Galland as he walked past, “God damn you I’ll murder you.”

Though he was one of the four accused soldiers and had now joined in the abuse of Doctor Galland, Irvin was not the companion who came back with Amos Fielding the night of the murder and kicked Galland.

The mystery soldier’s identity was not revealed until a second court martial trial convened the day after Fielding and Irvin’s concluded. As James Lynch and John Wilson went on trial, Doctor Galland identified the rosy-faced soldier who had kicked him off his pallet and taken his cap as James Lynch.

Lynch had spent his time on the witness stand in the earlier trial trying to establish John Wilson as the guilty party. Amos Fielding had corroborated his testimony, and Lynch reiterated his account at the second court martial hearing. At both hearings, however, an African American camp servant had coolly dismantled the testimony of these white soldiers, upsetting the established hierarchy and shifting the scales of guilt in their direction, threatening their very lives.

How must Galland have felt in taking the stand against his employer and other United States soldiers, setting his own future on an uncertain path? The trial clearly hinged on the validity of his testimony and had put the case against at least three of the soldiers back on firm footing

Adding fuel to Galland’s fire, further questioning of Charles Miller led to more details about the bricks used in the attack. Miller claimed that four bricks were thrown, without time enough between throwing the first pair of bricks and the second pair for the men to stop to pick up more bricks. The attack could not have been the act of one man.

Multiple witnesses noted a stack of loose bricks on Alexander’s Corner, diagonal from Miller’s shop, and a brick missing from the cemetery wall as the sources of the bricks used as weapons in the attack.

The next morning, four bricks were found near where George Miller had fallen. Three red bricks were taken from Alexander’s corner, the corner diagonally opposite Miller’s store on Commerce St., and one had been taken from the cemetery wall.*

Lynch’s story of Wilson acting as the lone brick-thrower simply could not hold up to Miller’s account of the number of bricks and the speed at which they were thrown.

With the evidence gathered and the testimony heard, would you convict the accused?

*Some discrepancy remains in the number of bricks thrown and found. While Miller’s testimony was clear that four bricks were thrown and four were found, he lists four red bricks being found taken from Alexander’s corner and one brick from the cemetery wall, totaling five.