Note: for magnifications, click photos or maps, then scroll down to right corner of dark-screen version, then click on “View full size” link.

Part 1 of this post introduced the story of my long, trial-and-error research on one of the Civil War’s most poignant series of photographs—images of the creation of a temporary cemetery in Union-occupied Fredericksburg in May 1864.

A quick review: workmen interred at this burial ground some of the 26,000 Overland Campaign casualties who had been dispatched that month to Fredericksburg for medical treatment. (Have a listen here to John Hennessy’s presentation on the City of Hospitals that resulted.) William A. Frassanito’s Grant and Lee: the Virginia Campaigns 1864-1865 (1983) would publish seven different images made by at least two different photographers at the temporary cemetery on May 19 or May 20, 1864. Here are four of the seven, from the collections of the Library of Congress and the National Archives: 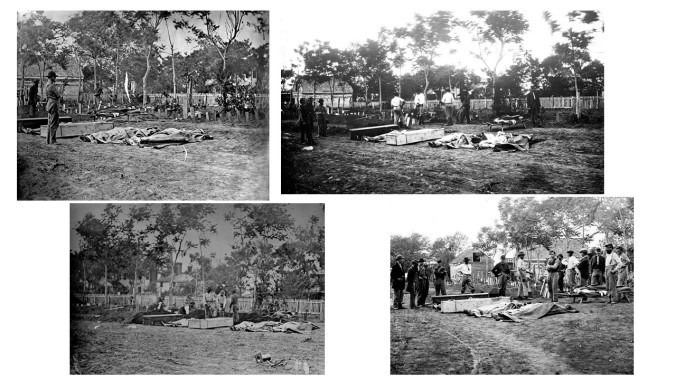 Frassanito’s inspirational book offered a challenge: find the temporary cemetery’s still-unlocated site on the modern landscape in or around Fredericksburg. My effort to do that came to rely upon one of the seven photographs, now in the collection of the National Archives, and offering an especially clear view of a large home in the background (detail below). If I could locate the house, I could locate the site of the cemetery, as he had suggested. Note the pair of slender chimneys with steep shoulders tapering just above the second-story windows, and the one-story dependency, or wing, connected to the main building: 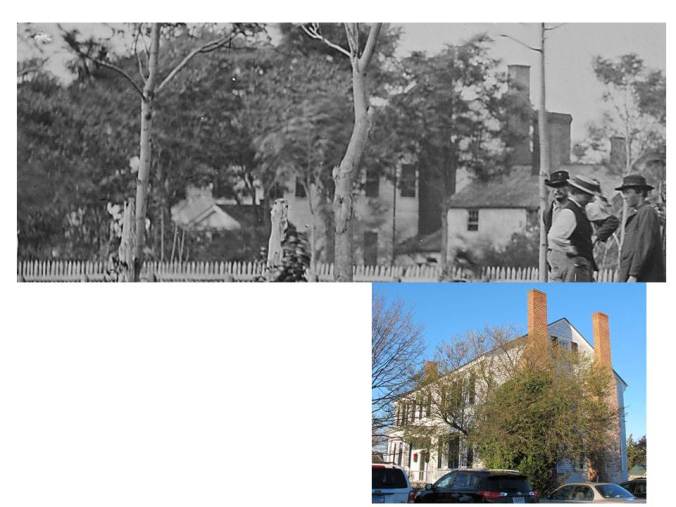 My inquiry eventually focused on a home (inset above) situated between Princess Anne and Charles Streets, in the northern part of old town, and property of Douglas K. Gordon during the Civil War. The Gordon House sports slender, twin chimneys at each end and tapering just above the second-story windows. And judging from antebellum insurance policies, a wing or dependency—vanished by the time of my initial research in the late 1980’s—had once adjoined the south end.

If the Gordon House and a southerly extending dependency indeed appeared in the background of the photographs of 1864, then the site of the temporary cemetery, I reasoned, had to be somewhere near or along the edge of Charles Street, parallel to it, not far to the southwest of the house. Such an alignment would place the tripods of the photographers of 1864 at places near—or directly in front of—one of the town’s earliest tourist attractions: the last home of Mary Washington, mother of George.

Here’s a map of the houses and other landmarks mentioned in this blog post and its predecessor (a second map appears further below, narrowing the focus as the geographic discussion narrows): 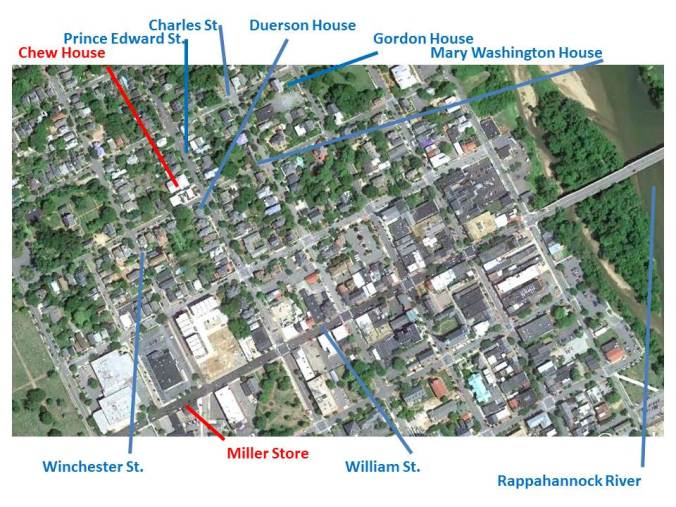 END_OF_DOCUMENT_TOKEN_TO_BE_REPLACED

Our second installment about the images taken from the steeple of St. George’s.

From John Hennessy (read the first post on the St. George’s steeple shots here; download the entire panorama, stitched together, here [patience, it’s a large file]. Pardon the imperfections in the Photoshop work–there are gaps in the images that I stitched together to create this panorama):

Last week we introduced the series of panoramic photographs taken from the steeple of St. George’s in 1888–as well as my attempt to stitch the images together into a single image. After looking into the heart of the town last time, let’s turn our attention westward, between George and William Street, for what I think is the most interesting part of the series, for here are two of Fredericksburg’s most important lost buildings.

To the left is George Street, off the camera to the right is William, and in the far distance is Marye’s Heights The roof immediately below the camera is…

NOTE: I have assembled the steeple panoramas into a single image . It’s a 22mb file–that is to say, large–but I’ve loaded it here if you wish to explore it on your own. We’ll occasionally take a look at this image in the coming month or so, seeing what it can tell us about Fredericksburg’s 19th-century landscape.

In 1888 a photographer mounted the steeple of St. George’s Episcopal Church on Princess Anne Street and took a series of eleven panoramic images of Fredericksburg, spanning the compass. The panorama isn’t perfect–there are gaps–but it is as thorough a documentation of any Virginia town as exists from that period. Explored deeply, the panoramas are a gold mine, revealing a number of buildings since lost,  a town still recovering from war, and a utilitarian landscape that has largely disappeared.