I came across this rather stunning ad from the Steuben Courier (Bath, NY), January 7, 1863.

The Union army butchered at Fredericksburg?  No problem. Shop at Perines!

The administration and war effort under siege by critics?  Well, at least Perines has the “cheapest stock of goods!”

Beset by the nation’s “vale of tears?”  No problem.  Rush to Perines!

Perine was the preeminent retailer in Bath, NY, through the second half of the 19th century.

If you are looking for a case study in Yankee crassness (I say as a Yankee), this is the mother of all of them.

From John Hennessy:        I have been working through sources related to the bombardment and looting of Fredericksburg. It’s been an interesting journey that’s carried me to some surprising conclusions (none flattering to anyone). I have come across many accounts that offer explanations or justifications for the looting of the town, and I wanted to share one of the most vivid of those. For those who think the Civil War was a war devoid of bitterness, read this. And imagine too the reaction of Southern civilians to such destruction.
* * * * * * * *
This letter is from Chaplain John Morris of the 8th Connecticut. Most importantly, it was written on December 12, 1862, as the looters did their work. 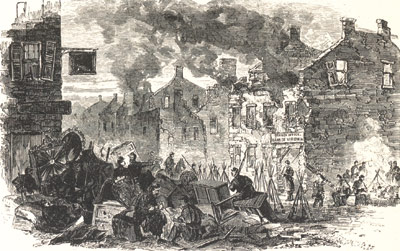 The scene at the intersection of Caroline and William Streets.

“Just retribution has really been meted out to Fredericksburg. The property of notorious and pernicious rebels has really been destroyed or used up for the advantage of the Union. Rebel houses from which white flags have been displayed one week and the next have been freely thrown open to shelter rebels for the murder of pickets, have really been demolished and burned….I do not regret that the rebels lose, but that value so immense has been wasted….I trust that this punishment will prove salutary to [the] people of Fredericksburg and of many other places where equal duplicity, treachery and barbarity have been displayed—so salutary that it will not need to be repeated.”
* * * * * * *
Chaplain Morris’s outstanding letter appeared in the December 20, 1862 issue of the New Haven Palladium. If  you are interested in reading the whole thing, you can find it here.

e news of death at Fredericksburg sped across the land, challenging the will of the sorrowful who received it. The long lists of dead and wounded usually appeared on page two or three of four-page local news sheets. Editors took care to arrange the names so they might be easily found—by regiment and company, the killed first, the wounded second, usually listed alphabetically, without comment. Nearby were often short pieces on
notable members of the community who had fallen, or stories that told of those—former classmates and present sons, friends, fathers, brothers, and husbands—who died dramatic
ally or pathetically.  The Portland Advertiser of January 3, 1863, published the last letter of George Parsons to his father in Gardiner, Maine, written as George lay dying in a field just south of Fredericksburg.  “Much love tall,” Parsons wrote.  “Farewell.”  The editor noted for his readers that the handwriting indicated George’s fingers trembled as he wrote. The paper he etched upon was “slightly tinged with blood.”[1]

In 83-words of type on page 2 of the December 22 issue, New Jersey’s Camden Democrat

announced the death of Sgt. Major John Fowler of the 15th regiment, “struck in the leg by a rifle ball, and bled to death in less than five minutes.” The 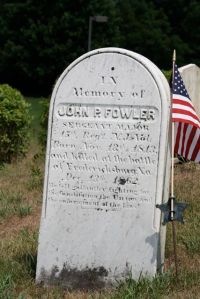 editor remembered Sgt. Fowler as a “large, powerful man, brave and generous to a fault.”  His death “leaves a widow and nine children to mourn his loss.”[2]

A few columns to the left of the lists, or perhaps on page 1 (but never on page 4), appeared the commentary and letters describing and interpreting the battle itself.  By the end of 1862, the news of battle and the long, sorrowful lists that accompanied it had become not routine, but at least rhythmic, consumed by the public with an increasing equilibrium—with a growing recognition that the news from any individual battlefield would not mark the end of national nightmare (though many still hoped it might).