During the National Park Service Centennial last year, the park staff delved into a bit of research on our own history. We looked at how our predecessors laid the groundwork, both in infrastructure and in historical research, upon which we have benefited and continue to build. The park had the advantage of a strong cadre of historians who conducted some of the first solid research on the park’s battles and resources. Ralph Happel is a name known to most who have studied the Civil War activities around Fredericksburg, but there was also T. Sutton Jett, Branch Spalding, Hubert Gurney, just to name a few. For about six years in the late 1930s, the park benefited from having as its chief of historians Edward Steere, a man whose combined knowledge and skills as a journalist, a soldier, and a historian resulted in a report that became the first in-depth battle study of the 1864 Overland Campaigns first engagement. Steere’s The Wilderness Campaign remains a popular resource for students of the battle.

Born in Los Angeles, California on April 21, 1889*, Edward Steere entered a military family. His father, Captain Henry Steere, participated in the Spanish-American War with the 1st Battalion California Heavy Artillery and then in the Philippine Insurrection with the 36th United States Volunteers. Captain Steere later pursued a career in education as both professor of military tactics and commandant of cadets at the Western Reserve University of Cleveland, Ohio, and even later in a similar role at the Shenandoah Valley Military Academy in Winchester, Virginia. Edward’s older sister Ruth married three times, each to an officer in the United States Army. Her first two husbands were medical officers, while her third husband, Colonel Reginald Heber Kelley, commanded the 116th United States Infantry during the Meuse-Argonne Offensive in 1918. Edward’s younger brother John entered the United States Army and rose to the rank of colonel. Perhaps it was the military tradition, a sense of adventure, or even personal convictions about the war in Europe that led young Edward to leave the United States and enlist in the Canadian Army on September 23, 1914, at the age of 25. Steere joined “B” Battery, Royal Canadian Horse Artillery and over the following four years he served with his unit in France, presumably taking part in all of its battles. His service record notes little, other than three instances in which he ran afoul of his superiors. The first involved “altering the duration of his watch,” the second punishment came for “using insubordinate language to his superior officer,” and the final instance involved “galloping a horse on a hard road.” Dismissal at the expiration of his service came on May 31, 1919, at which time Steere returned to the United States to pursue an education for a civilian career.

Steere’s college pursuits prepared him well for his future vocation as a historian. He attended the University of Texas and received a bachelor’s degree in journalism in 1924 and a master’s in history in 1929. After a stint writing for the Dallas Morning News and the Austin Statesman, Edward landed a job with the National Park Service, working out of the agency’s Washington, D.C. office. The War Department transferred its battlefields and military parks to the National Park Service in 1933, and around that time Steere joined the staff of the Fredericksburg and Spotsylvania National Military Park. He arrived in Fredericksburg as an assistant historical technician, but within five years he rose to the position of “chief historian,” overseeing the park’s historical research and public programming. His largest contribution while stationed at Fredericksburg was his research on the Battle of the Wilderness. The result of that research has benefited historians for decades.

Steere began his study of the Battle of the Wilderness shortly after arriving in Fredericksburg and finished both the research and writing of his manuscript in 1937. Steere’s “The Campaign of the Wilderness, May 2-7, 1864” was intended as an internal document to educate the park staff. Steere utilized the small park library, and with a few small exceptions, he relied entirely upon published sources, specifically the Official Records. Prior to his research, a truly analytical look at the Wilderness did not exist. Andrew Humphreys’ The Virginia Campaigns of ’64 and ’65: The Army of the Potomac and the Army of the James (1883) and Morris Schaff’s The Battle of the Wilderness (1910) both represented studies written by participants, but each lacked the distance and analysis of a historian. Steere’s familiarity with the ground and his painstaking analysis of the source material resulted in a 650-page typed manuscript. It is likely that his manuscript would have remained on the park’s library shelf and out of sight from anyone other than park staff had it not been for an inquiry from soldier and publisher Lieutenant General Edward Stackpole, Jr. two decades later.

General Stackpole owned The Stackpole Company, a publishing company out of Harrisburg, Pennsylvania that focused on nonfiction, including sporting books and military history. Stackpole himself wrote numerous titles, and in 1956 he published They Met at Gettysburg, his foray into titles on Civil War battles. Casting about for ideas for another Civil War topic, Dr. Frederick Tilberg, a National Park Service historian associated with Gettysburg National Military Park, suggested Stackpole look into a detailed study sitting on the shelves in Fredericksburg. Stackpole contacted Fredericksburg’s Superintendent Oscar H. Northington, thinking that the manuscript dealt with the campaigns of Fredericksburg and Chancellorsville. Northington explained that the study dealt with the Battle of the Wilderness, but Stackpole chose to pursue Steere’s work anyway. In 1960 The Stackpole Company published The Wilderness Campaign, after boiling it down to 460 pages. The Wilderness Campaign was well received. “It is military history – pure, detailed, and painstakingly presented,” wrote a reviewer for Civil War History. “Though Steere combines in his personal experience the skills and knowledge of journalist, historian, and combat soldier,” offered a review in The American Historical Review, “his chief asset has been the good, unspecialized one of painstaking thoroughness and accuracy.” 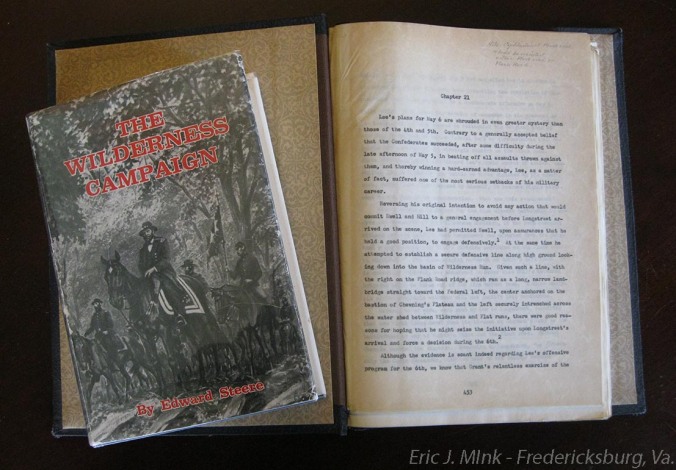 The result of Steere’s research into the Battle of the Wilderness, both in manuscript and published form.

Stackpole published The Wilderness Campaign occurred after Steere entered retirement. He left the Fredericksburg and Spotsylvania National Military Park in September 1941 to take a position as the first full-time professionally trained historian assigned to Antietam National Battlefield. His time at Antietam lasted only a couple years, and in 1943 Steere left the National Park Service and began work as a historian with the United States Office of the Quartermaster General. It was in Washington that Steere filled out the remainder of his professional career, specializing in documenting the Graves Registration Service and burial of American war dead. His publications included The Graves Registration Service in World War II (1951) and Final Disposition of World War II Dead, 1945-1951 (1957). Steere retired from federal service in 1955 and passed away in 1974. He and his wife, Susan Yates Embrey, are buried in Fredericksburg’s Oak Hill Cemetery. 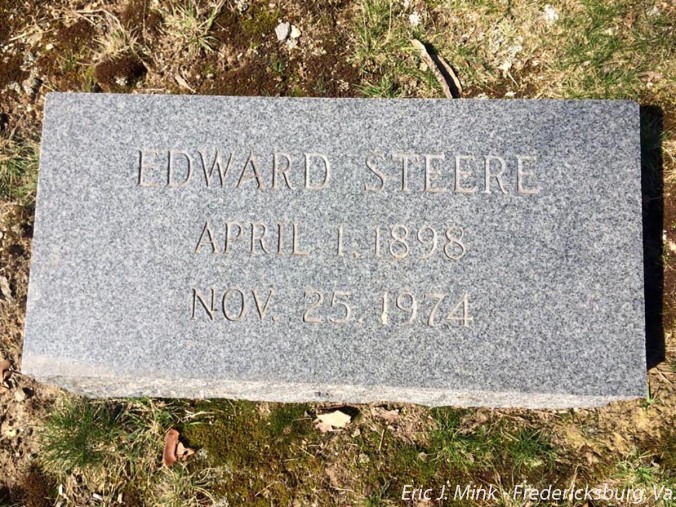 *Some confusion exists about the year Edward Steere was born. Most of the later sources provide 1898. These include his headstone, obituary, biography on the dust jacket of his book, marriage record, and the 1940 Census. Earlier sources, however, state 1889, such as the Census for 1900 and 1910, and his enlistment records in the Canadian Over-Seas Expeditionary Force. I lean toward the earlier date and therefore list is birth year here as 1889. Further confusing things is that his headstone says Steere was born on April 1, when nearly all sources say he was born on April 21.