From Hennessy:  This year, we decided to take a different approach to the Fredericksburg Battle Anniversary. For the last two decades we have held a rather static event, always in front of the Kirkland monument, always with re-enactors providing color and presence, an emcee, and a keynote speaker.

This year we experimented with something more dynamic, something that was not explicitly commemorative, but instead allowed visitors to make a gesture if they wished to, at the site of their choosing. This year, we walked the Sunken Road–the 28th Massachusetts and 47th Virginia leading the way–stopping at sites that help tell the story of the battle in different ways. We began with a stop that explored the experience of children. At the Kirkland monument, we spoke of those who defied the conventions of war and helped in notable ways. We stopped at the original stone wall and talked of those who defended Marye’s Heights, and at the Innis House, where we recalled the varied experiences of civilians.  We concluded stops on the Bloody Plain and in the National Cemetery, where we offered reflections the meaning and significance of the war, and why those who gave their lives ought to be remembered.

Along the way,  we invited visitors to leave a flower as a remembrance any of these sites they chose.  And we asked them to see the war through different lenses.

Of course the actual anniversary of the battle now upon us, and I thought over the coming days we would post each of the six stops we made, with the words presented and a few supplemental pictures.  We had a different member of the staff present at each stop.

Today we give you our first stop, at the Ebert Family house site–an overlooked place just north of the Kirkland monument. There we spoke of the children.

We gather here to remember an event that at its core was horrific—a deadly cascade of humanity across what were the open fields beyond us.  Battles are hard things.

War and battle imposed suffering and struggle, all punctuated by loss.

So why do we come to a place like this?

In the midst of the worst that humanity can produce, we wonder at the human qualities that are called forth to confront such an ordeal.  These qualities we seek to understand and sometimes come to admire an emulate.

War’s tendrils touched every fiber of this community.

Here, at this spot, in front of the site of the Ebert House:  we remember the children

Here in 1862 lived Anna Ebert 7, Dorothy Ebert 5, and their little brother Albert Ebert 2—all of them the children of Henry and Sophia, Prussian immigrants who in 1858 moved into the small, picturesque house that stood at the turn in this road. 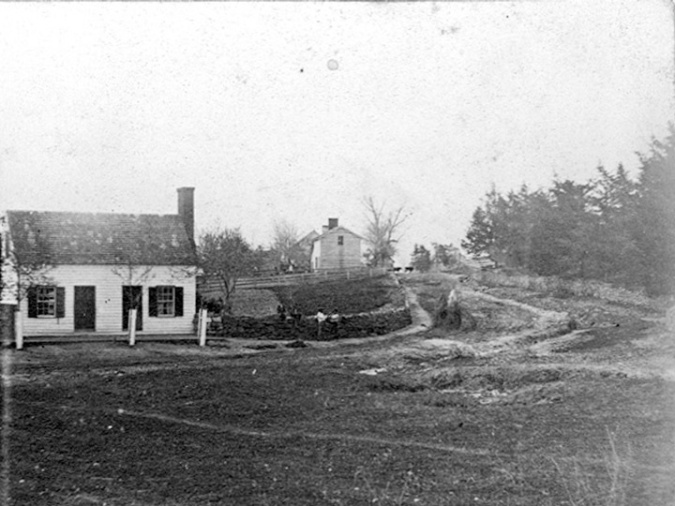 The Ebert House at left, with the Sunken Road and Innis House. beyond. From the collection of Jerry Brent, courtesy Lou Brent

This, now famous as the Sunken Road, was in 1862 the Telegraph Road. Here it curved into Fredericksburg, following what is today Kirkland Street. Coming from the south, this was the main access into Fredericksburg—the I-95 of its day, carrying goods and passenger coaches, bearing the footfalls of farmers, the famous (including, probably, Abraham Lincoln), and the enslaved, doing their owner’s business.  In fact if you look closely you can see that on the west side of the road the stone wall in front of Brompton is bowed a little bit–an indentation. That was put there to allow for a wider turning radius for large wagons making the turn into town. 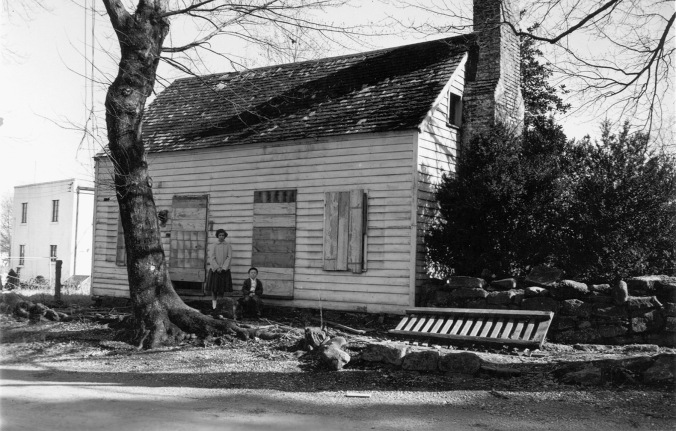 The Ebert House not long before it was torn down in the 1950s. The Ebert family owned the house into the 1940s. The Telegraph Road is in the foreground. It was likely in this road that the Ebert Children piled into a wagon on December 11, and then fled to escape coming battle.

Soon after moving in, Henry Ebert opened a small grocery in this house on the turn of this road. Intermittently for most of the next 80 years, travelers and children alike stopped here for a gingerbread cookie or piece of candy.

In the predawn morning of December 11, 1862, the boom of two cannons echoed over this landscape, signaling that the Union attempt to cross the river had begun.  Union General Burnside’s decision to cross at Fredericksburg, and Robert E. Lee’s decision to contest that crossing, fated Fredericksburg itself to be a battlefield.

The Ebert’s middle child, Dorothy, later remembered the scurrying that followed the booms of those cannons that morning, soon swelling into a roar. Henry hitched his team and pulled the family wagon around. Mother and children piled in, and with shells bursting over Fredericksburg, the Ebert family headed along the Sunken Road into Spotsylvania County, to safety.

All over town families suffered even more harrowing ordeals that day. Young Samuel Beale and his family huddled in the basement of their house on Lewis street, literally praying for relief. A 12-pound cannonball struck the house, dislodging a brick that in turn struck Samuel.  He fell against his mother:  “oh Ma, I am struck.”  “He seemed to be stunned and helpless,” his mother remembered, “but I soon saw it was no terrible wound, only the deep redness of the skin about the shoulder and breast.  We laid him down upon an old quilt.” 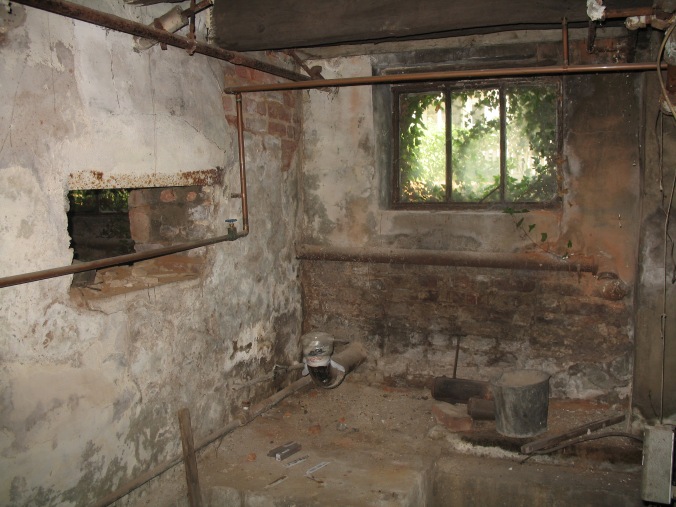 A corner in the basement of Samuel Beale’s house, where he was wounded by a flying brick on December 11, 1862.

….For long hours the only sounds that greeted our ears were the whizzing and moaning of the shells and the crash of falling bricks and timber….My aunt was cowering inside [the large old fashioned fireplace]; every time a ball rolled through the house or a shell exploded she would draw herself up and moan and shiver.

Fannie and her family, like the Beales, fled town, following a dreary procession along muddy roads, heading toward Salem Church. Fannie remembered “we started just as we were; my wrapping, I remember, was an old ironing blanket, with a large hole burnt in the middle.” 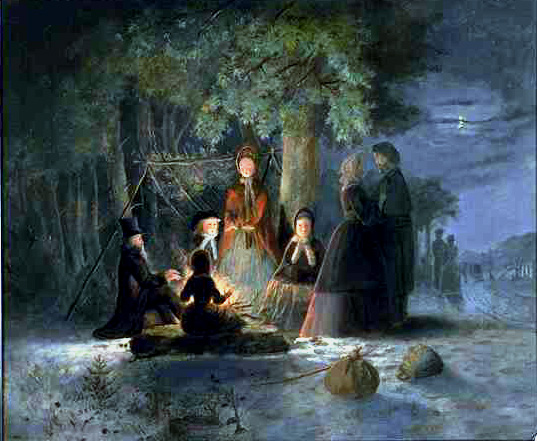 Crowds of women and children had sought refuge in this sheltered spot and as night drew on they were in great distress….Some had stretched blue yarn counterpanes or pieces of old carpet over sticks, stuck in the ground-and little ones were huddled together under these tents, the women were weeping the children crying loudly, I saw one walking along with a baby in her arms and another little one not three years old clinging to her dress and crying “I want to go home” My heart ached for them….

That night, the Confederates yielded the town.  As darkness fell, Buck Denman of the 21st Mississippi knelt to take a final shot, when a little girl three years old toddled out of an alley just in front.

Denman threw down his weapon and ran forward, toward the Yankees. He grabbed the girl, ran and grabbed his gun, slid behind a house, and then, musket in his left hand and baby girl in his right, trotted after his fellow soldiers toward Marye’s Heights.

For the next four days, the men of the 21st Mississippi cared for the little girl, amidst a battle.

The sight of children fleeing to the countryside, or even at times left unprotected, speaks to the harshness of this war and all wars.  Many of those children would grow to become pillars of this community, embedding in the town’s collective memory THEIR experience.  They hoped we would not forget.

And so today, we remember:  the children, and specifically Samuel Beale and Ann and Dorothy Ebert, and their little brother Albert.