From Hennessy (see here for an earlier post on damage in town):

Fredericksburg had eight churches at the time of the Civil War, and all of them played a central part in the town’s thrice-repeated role as a Union hospital.  Of them all, by far the best documented is the Fredericksburg Baptist Church.  The sanctuary, shown below, was just seven years old when war visited its walls on December 13, 1862. That morning, Union hospital workers arrived and cleared the main sanctuary by throwing most of the pews out the windows.  Then the wounded started pouring in, using the seat cushions as beds. 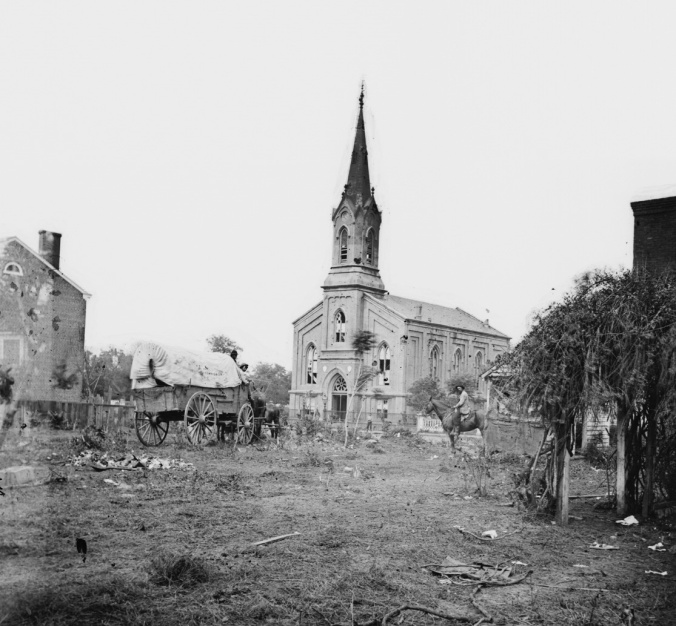 That the Baptist Church became such a visible and important hospital is a little surprising given the physical layout of the place.  The doorway you see in the image opens to what in 1862 was probably a chapel or meeting room.  The main sanctuary is upstairs, reached by one of two fairly arduous stairways.  Getting wounded into the main sanctuary meant carrying them up the stairs–no easy task.

This is one of four buildings in town that we can be certain had Clara Barton grace its entryway during her four visits to Fredericksburg.  Far more important than that, during the massive movement of wounded through Fredericksburg in 1864 (26,000 wounded in two weeks), the Baptist Church was the domain of Dr. Frank Hamilton, one of America’s premier surgeons, who had been lured out of military retirement to help treat the wounded in Fredericksburg.  The use of the hospital is exceedingly well documented.

The war left the Baptist Church a mess.  Resident H.W. Willenbucher later testified to the damage.

END_OF_DOCUMENT_TOKEN_TO_BE_REPLACED

From Hennessy:  [Note: click on images to enlarge them.]

There is a persistent and oft-repeated local belief that the famous photograph below  is NOT in fact of buildings at the junction of Hanover and George Streets.  I have had probably a dozen people argue that the photo is someplace else.  To put that to rest, I offer up a couple of images that prove, I think conclusively, that the image is indeed of houses at the junction of Hanover and George Streets–Sandy Bottom, as it was known. 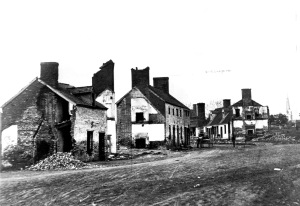 Most importantly, the steeple on the right edge of the image is without question the steeple of St. George’s Episcopal Church, which still stands at the corner of George and Princess Anne Street.  More proof comes from an equally famous photograph taken about 200 yards to the right of this image–the famous panorama of the Fields in front of Marye’s Heights that we have used as our banner image, above.  I post below a detail from that image.

This image was taken from in front of Federal Hill on Hanover Street, looking westward across what we have come to call the “Bloody Plain” in front of Marye’s Heights.  Look closely at the building on the left of the row of buildings at the junction of Hanover and George.  It matches precisely the nearest building in the banner photograph: the corner is gone, the pattern of windows is the same, etc.   While the pile of bricks in the close-in view is gone in the Federal Hill view, there can be little doubt that we are looking at the same set of buildings in both images.

By the way, at least two of the buildings in Hanover/George image were owned by Peter Goolrick, the man who in 1860 owned more property in Fredericksburg than anyone else.  An Irish immigrant who arrived in Fredericksburg at age 17 and built a fortune, his house still stands at 723 Caroline Street–at the corner of Hanover and Caroline.  Today the building houses, ironically, Irish Eyes, a specialty shop.