[A note before we get to our main topic: when you get a chance, jump over to Fredericksburg Remembered for a post about a new volume of Fredericksburg letters debuting to the public on Sunday, October 27. You’re invited. Good reading for a good cause.]

Today we had the chance to revisit Sherwood Forest, one of the great houses in the region–and certainly one of the greatest house sites anywhere, perched atop a hill overlooking the broad Rappahannock plains at what was  known as Fitzhugh’s Crossing (written about here and here).  As many of you know from our previous visits to Sherwood Forest, the site is slated for development. The house and immediate grounds are planned to be preserved (about 40 acres), while the surrounding 1,100 acres will be turned into housing. The developer, the Walton Group, plans to retain the historic core of the property and is doing stabilization work on the big house and kitchen now. They offered us the chance to take a look–the first chance we have had to go inside the big house and the adjacent kitchen, and so we share some photos. Our thanks to Kevin Crown of Walton for inviting us over. 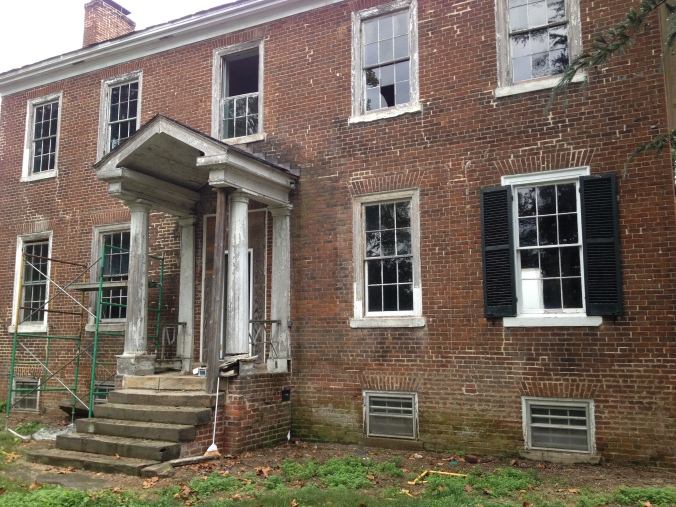 The place was built about 1838 and retains a good deal of integrity, though years of abandonment have taken its toll. Still, the interior is impressive. Beyond the addition of a kitchen and bathroom, little has changed since Henry and Jane Fitzhugh built the house after their marriage in 1837.  Water and termites have been destroyers, but the house, while not livable, is certainly salvageable.

[A historical note:  Brad Forbush, who maintains an outstanding site on the 13th Massachusetts, has posted some wonderful material about Sherwood Forest.  Click here and scroll down for the story of John Fay and Sherwood Forest.]

The SE room downstairs, with its pocket doors.

Stabilization work is also going on in the kitchen. END_OF_DOCUMENT_TOKEN_TO_BE_REPLACED

The kitchen qaurters are obscured by trees.

Last night we held our final History at Sunset of the 2011 season–a tour at Sherwood Forest in Stafford County.  We have written about Sherwood before, and the Free Lance-Star did a very nice lead-in piece earlier this week, which you can find here. The FLS article helps explain the immense turnout we had last night: 335 people, which is by a wide margin the biggest turnout we have ever had for a History at Sunset program in the ten years of the series. Because of a momentary collision between my leg and my chainsaw earlier this week (I will be fine–just needs healing), Donald Pfanz jumped in and and with Caity Stuart did the program.

Several months ago Sherwood Forest was named by Preservation Virginia as one of the state’s most endangered historic sites. We’ll share more about this profoundly significant and compelling place going forward.

Once again–and despite some real challenges with heat and storms–this year’s History at Sunset program was another resounding success, averaging more than 140 per program. This is exceptionally impressive because many of the programs were at Wilderness, Chancellorsville, and Spotsylvania, which traditionally attract smaller crowds, but not this year. The park staff meets on September 2 to start planning next year’s programs, so all ideas are welcome.

The area of Sherwood Forest today

In June 1863, Federal troops staged an assault crossing and bridge laying at Franklin’s Crossing on the Rappahannock River, just downstream from Fredericksburg. In later years, the June event would often be classified directly or indirectly as the curtain-raiser of the Gettysburg campaign, including by the compilers of the three-part volume 27 of The War of the Rebellion: A Compilation of the Official Records of the Union and Confederate Armies.

A Gettysburg context makes perfect sense to people who know the future. Union forces indeed abandoned the Franklin’s bridgehead, occupied from June 5 until June 14, 1863, before it could host or become the springboard to a battle. After Chancellorsville, which had occurred one month before, the next battle to involve the majority of the units of the Army of the Potomac and the Army of Northern Virginia was indeed at Gettysburg, in early July. (The opposing mounted forces, with some infantry involvement, fought at Brandy Station on June 9, and a Confederate corps engaged and routed a Union division at and near Winchester on June 13-15.)

The rarely seen image at left shows the Franklin’s Crossing bridgehead in June 1863 and looks north in a “Confederate’s-eye view” across the site of the June 5 assault by Union forces that had preceded their construction of the two pontoon bridges. Click to enlarge. Source: The Miriam and Ira D. Wallach Division of Art, Prints and Photographs: Print Collection, The New York Public Library. At right is a better-known companion view that looks in the opposite direction. Source: Library of Congress.

(I share the north-looking photograph, above, in accordance with the New York Public Library’s posted belief that the item is in the public domain under the laws of the United States.)

Yet Union Maj. Gen. Joseph Hooker in June 1863 ordered the operation at Franklin’s Crossing not knowing the future but attempting to predict and influence it. As described in this blog post and its second part, he maintained the bridgehead for more than a week as part of successive plans to move the Army of the Potomac south or southwest to fight in central Virginia, not north or northwest to fight above the Potomac. In August 1862, prior to the Battle of Second Manassas, Union Maj. Gen. Fitz John Porter had similarly suggested a Union push from Fredericksburg south “toward Hanover, or with a larger force to strike at Orange Court-House,” to the southwest, as the Army of Northern Virginia itself moved northward.

At Franklin’s Crossing in June 1863, the Rappahannock was passed, and combat did occur, unlike the similarly difficult-to-classify “Mud March” of the previous January. Again, a Gettysburg context for the June events at Franklin’s makes sense to some degree, and I certainly don’t reject it, but I seek companion- or alternate interpretation not grounded in hindsight. My offering of another designation, “Third Fredericksburg,” in the title above, emphasizes the perspective of Hooker, whose orders created the bridgehead and formulated an evolving scheme, oriented away from Gettysburg, for the bridgehead’s exploitation. I avoid a parallel discussion of what was known to and planned by his opponent, Gen. Robert E. Lee, other than my use of a single quotation from a secondary source, below.

This map by John Hennessy shows the three-bridge configuration at Franklin’s Crossing at the onset of the Second Fredericksburg operations on April 29, 1863, and provides a good orientation to the modern landscape there. The Union pontoon bridges completed on June 6, 1863—just two, though—were situated in the same general location occupied by the three spans a month before.

I have no more desire to inflate Hooker’s plan into a conceptual masterpiece than I do the resulting, intermittently brisk engagement of June 5-14 around the Franklin’s Crossing bridgehead into anything approaching the intensity of the “Second Fredericksburg” component of the Chancellorsville campaign, in late April and early May, much less that of the First Fredericksburg fighting of December 1862. As I suggest below, Hooker’s motivations for establishing the bridgehead in June 1863 may have included adjusting in the present his military reputation of the future. Yet the story of the events of early June 1863 offers an opportunity—surprisingly neglected thus far in historical writing—to better understand the man who had planned and managed Chancellorsville. Hooker, after all, chose Franklin’s for his opening infantry move in June, just as he had done in late April at the outset of Second Fredericksburg.

END_OF_DOCUMENT_TOKEN_TO_BE_REPLACED

From John Hennessy (click here for a short prior post on an artifact from Mannsfield). Information on Mannsfield’s location and current condition is at the end of this post. Please remember that the site of Mannsfield is on private property and not accessible to the public.

Spotsylvania has been particularly hard-hit by the loss of historic homes over the decades. In some areas, you can travel miles without coming upon an antebellum home–this on a landscape that was once liberally dotted with them. Some succumbed to war, more to neglect. And a few disappeared to the bulldozer’s blade. Of all those that have vanished, none in its day shined more brightly than Mannsfield.

The remains of Mannsfield, probably in the 1870s. The ruins of the big house are at center; the north wing at left, and the south wing on just on the right edge. These ruins stood until the 1920s.

It stood about two miles south of downtown Fredericksburg, on the banks of the Rappahannock River.  Mannsfield is today most famous as the site where Union general George Dashiel Bayard was killed at the battle of Fredericksburg–he was mortally wounded in he front yard and died just four days before what was to have been his wedding day. But, in fact, Mannsfield was probably the most impressive antebellum plantation in the Fredericksburg region, and one of the oldest, too. It was built in 1765-1766 for Mann Page III,* and it was close to being a literal copy of Richmond County’s Mount Airy, where Page’s mother grew up a Tayloe (the only major difference I can see is the design of the riverside entryway–otherwise the places seem to have been identical; Mount Airy still stands). Page was the Fredericksburg region’s first congressman, selected to the Continental Congress in 1777, at age 28. He died in 1803 and is buried in the nearby family cemetery–the only surviving feature of the Mannsfield complex.

The house was anything but understated, built of sandstone blocks with two advanced, detached wings linked to the main house by a circular covered walkway. In the main house was nearly 7,000 square feet of living space, plus an elaborate basement. By the time of the Civil War (when Arthur Bernard owned it), thirty outbuildings sprawled across Mannsfield’s 1,800 acres (one of the biggest plantations around), including a stable, corn house, machine house, three barns,  dairy, garden office, pump house, meat house, three poultry houses, ice house, a private owner’s stable, carriage house, overseer’s house, blacksmith shop, tobacco house, and six slave cabins (the site of some of these cabins, which in 1860 housed some of Bernard’s 77 slaves, is in the park off Lee Drive). Mannsfield’s prominence guaranteed it got attention in both peace and war. Washington reputedly visited here; so too did Union luminaries in 1862. For long stretches of 1862 and 1863, the house was in Confederate hands. Indeed, it was by the hands of Confederate pickets that the big house burned, accidentally, in early April 1863. 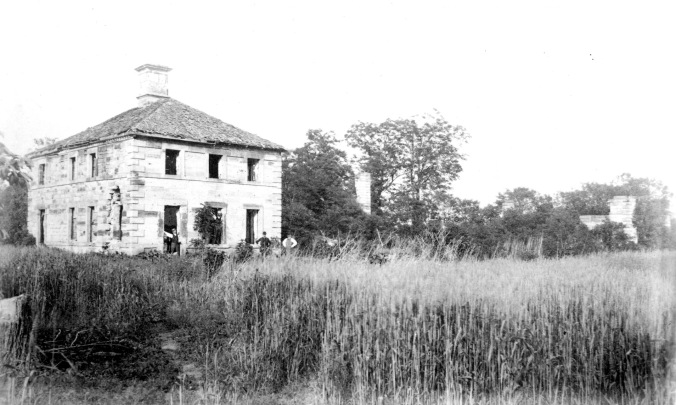 The standing ruins, looking at the west facade--looking southeast likely in the 1870s. The north wing is at left, the ruins of the big house faintly visible at center, and he remnants of the south wing at right.

The ruins of the main house and the decaying remnants of the wings stood for six decades, until the early 1920s when artist Gari Melchers of Belmont acquired the accessible stone from the then landowner, R.A. James. According to local news reports, Melchers used stone from Mannsfield to build his new studio on the grounds of Belmont. Some of it also ended up in local buildings, like this one on Virginia Ave–near upper Princess Anne Street.