A previous two-part post (beginning here) took a look at the promotion of Emory Upton to the rank of brigadier general following his actions near Spotsylvania Court House. The legend of Upton and his May 10, 1864 attack goes beyond the recognition he received in the form of elevation of rank. The 6th Corps’ assault that afternoon has universally become known as “Upton’s Attack” and historians and battlefield guides have gone so far as to credit Upton with nearly every aspect of the attack’s planning. But just how much involvement did Upton really have in the conception and development of the assault that bears his name?

A commonly held interpretation surrounding the May 10, 1864 attack of the 6th Corps is that Colonel Upton developed the idea of attacking in a compact assault column – in other words, a reduction of the attacking formation’s front and stacking its regiments to create depth and power from behind. As the “Upton as lobbyist” interpretation goes, the young colonel had for some time recognized the folly of using linear formations for attacks against strong defensive positions and therefore advocated for the use of the assault column. This traditional interpretation implies that his views were so well-known, even to Army of the Potomac Headquarters, that on May 10 Generals George G. Meade and Ulysses S. Grant gave Upton the chance to prove himself. Although this interpretation establishes Upton as an easy protagonist in the attack story, it’s difficult to trace the origins of the storyline. A look through the writings of staff officers at the headquarters of both the Army of the Potomac and the 6th Corps fails to uncover any mention of Upton’s opinions on the matter. Postwar accounts of the fight by participants also don’t indicate that Upton had any influence on the decisions surrounding May 10. The first mention of Upton as a lobbyist for the assault column that could be located is in Bruce Catton’s A Stillness at Appomattox, the third volume in the author’s The Army of the Potomac trilogy and the recipient of the 1954 Pulitzer Prize for History.

Catton introduced Upton with a brief biographical sketch, in which he quotes a letter from the young colonel to his sister. The letter is critical of Union generalship and what Upton perceived as incompetency in ordering assaults against an entrenched enemy. This, along with a description of Upton’s successful November 1863 attack against a Confederate fortification at Rappahannock Station, helped set up the decision on May 10. On the Confederate position at the “Mule Shoe” of Spotsylvania, Catton wrote:

“Upton, in short, felt that he knew how to break through those Rebel entrenchments, and he spoke up about it, and on the afternoon of May 10 they gave him twelve picked infantry regiments, his own 121st New York among them, and told him to go ahead.” Catton, p 112

Furthermore, Catton inferred that not only did the idea of the attack originate with Upton, but the compact formation was also his idea.

“The obvious fact here – at least it was obvious to Upton – was that an assaulting column’s only hope was to get a solid mass of riflemen right on the parapet as quickly as possible…So Upton formed his men in four lines, three regiments side by side in each line…” Catton, p 113

END_OF_DOCUMENT_TOKEN_TO_BE_REPLACED

In a previous post, found here, I looked at the sources of the long accepted story that Union Colonel Emory Upton received a battlefield promotion following his May 10, 1864 attack at the Battle of Spotsylvania Court House. Also, I considered the efforts made before the battle to secure for Upton the promotion to the rank of brigadier general. In this post, I will examine the timeline and circumstances surrounding that promotion.

The attack for which Upton has gained much notoriety occurred in the early evening of May 10. He led twelve regiments, organized in an assault column, across open ground and briefly penetrated the strong Confederate entrenchments along the western face of the “Mule Shoe” line. Although ultimately forced to withdraw, Upton’s success has been credited with giving Lieutenant General Ulysses S. Grant the idea for a larger attack two days later. Grant later wrote that he immediately promoted Upton to the rank of brigadier general for leading this May 10 attack. Grant claimed he received this authority before leaving Washington, D.C. two months earlier, but contrary to this assertion he does not appear to have had the liberty to make battlefield promotions on the night of May 10. In fact, he did not receive that latitude until six days later.

In a dispatch dated May 15, Secretary of War Edwin Stanton wrote Grant: “If you deem it expedient to promote any officer on the field for gallant conduct, you are authorized to do so provisionally, and your appointment will be sanctioned by the President and sent to the Senate.” This message did not reach Grant until the following day. Two things about it are important. Until it reached his hands on May 16, Grant did not have the leeway to make battlefield promotions, and once he did have that authority, the promotions still needed to be confirmed by the Senate. So, Grant did not have the authority to promote Upton on the battlefield six days earlier. 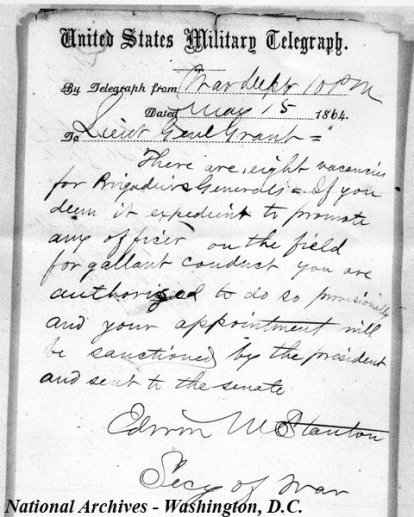 Edwin Stanton’s May 15 message to Grant. This authorized Grant to make battlefield promotions, something he did not do until June 1864.

This is not to say that Grant did not recognize Upton. The lieutenant general did recommend the young colonel for promotion. It’s likely, however, that the recommendation actually originated with Army of the Potomac commander Major General George Meade. On May 12, while the battle raged along the Confederate “Mule Shoe,” Stanton fired off messages to both Grant and Meade in which he urged the two generals to forward nominations for promotions. To Grant, Stanton wrote” “Please furnish me with any nomination you desire to have.” To Meade, Stanton pleaded “The sad casualties that have befallen the officers of your army leave many vacancies to be filled, and if you will send me the names of the persons you desire to have appointed to the rank of brigadier, their nominations will be immediately sent to the Senate.” The following day, Meade sent a message to Grant’s headquarters in which he recommended certain officers for promotion. The dispatch requested Brigadier Generals Horatio G. Wright and John Gibbon receive promotions to the rank of major general. Colonels Samuel Carroll, Emory Upton, and William McCandless were recommended for the rank of brigadier general. Meade simply stated that the men deserved promotions “for distinguished services in the battles of the Wilderness and Spotsylvania Court-House.” This same list of names appears in a dispatch from Grant to Edwin Stanton, also dated May 13, suggesting that Grant simply endorsed the recommendations made by Meade. Grant requested the promotions “to be made for gallant and distinguished services in the last eight days’ battles.” No specifics actions or reasons were provided for any of the men. Stanton replied the following day informing Grant that “The brigadiers in volunteer service you name shall be appointed.” The appointments still required confirmation by the Senate and that took time.

END_OF_DOCUMENT_TOKEN_TO_BE_REPLACED

For last year’s (2014) 150th anniversary commemoration of the Battle of Spotsylvania Court House, a colleague and I provided a tour that focused on the May 10, 1864 Union attack on the Confederate “Mule Shoe” defenses. We entitled the program “Upton Gets His Star: Revolutionizing Warfare,” a reference to Colonel Emory Upton, who we understood was promoted to the rank of brigadier general following the assault. A month later, while assisting with the Battle of Cold Harbor programs, a visitor who had been on the Spotsylvania tour asked me why the 2nd Connecticut Heavy Artillery’s monument at Cold Harbor listed Upton, the regiment’s brigade commander, as a colonel if he had been promoted two weeks earlier at Spotsylvania. I questioned Bob Krick, my friend and colleague at Richmond NBP, who informed me that when the monument was being planned in 2001 he could not find any indication that Upton held the rank of brigadier general at Cold Harbor. This interpretation ran contrary to the story we told, and had been telling for years, at Spotsylvania. If Bob was right, then when did Upton receive his promotion?

The claim that Emory Upton received his promotion to brigadier general at Spotsylvania originates with an authoritative and seemingly indisputable source. Ulysses S. Grant claimed in his military memoirs that he promoted Upton on the field. In his own words:

“Before leaving Washington I had been authorized to promote officers on the field for special acts of gallantry. By this authority I conferred the rank of brigadier-general upon Upton on the spot, and this act confirmed by the President.” Ulysses S. Grant, Personal Memoirs of U.S. Grant, Volume II (New York: Charles L. Webster & Co., 1885) 224-225.

Another oft-cited source for Upton’s promotion on the field at Spotsylvania is the memoir of Dewitt Clinton Beckwith of the 121st New York Infantry, as quoted in Isaac O. Best’s 1921 history of that regiment, and available here. Best quotes Beckwith remembering “Colonel Upton had been made a brigadier general upon the field by General Grant.” Best takes it further and quotes Beckwith relating a conversation the latter had after the war with Martin T. McMahon, former Chief of Staff at Sixth Corps headquarters. Beckwith said, as quoted by Best, that McMahon made the following promise to Upton just prior to the attack on May 10:

“’Upton you are to lead those men upon the enemy’s works this afternoon, and if you do not carry them you are not expected to come back, but if you carry them I am authorized to say that you will get your stars.’” Isaac O. Best, History of the 121st New York State Infantry (Chicago: W.S. Conley Co., 1921) 135-136. 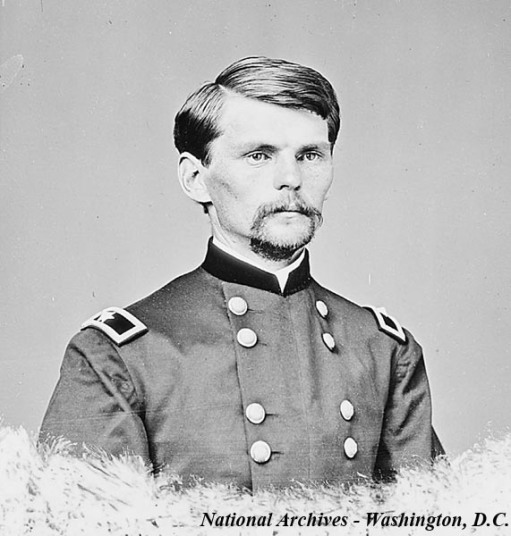