On the eve of the 150th anniversary of Lincoln’s visit to Fredericksburg, we refer you to a post we did nearly two years ago that documents pretty strongly that Lincoln visited the Sunken Road and Marye’s Heights in May 1862. You can find that post–one of our most popular ever–here.

Union General Rufus King (center) on the front steps at Chatham in the spring of 1862. That’s future Union general Judson Kilpatrick at right, already looking the daredevil. Lincoln marched up these steps and into the front door on May 23, 1862 to meet with King, McDowell, Gibbon, and others.

Lincoln’s May 23 visit came at a critical time for the Union army, as McDowell’s troops at Fredericksburg made final preparations for their advance south on Richmond, set for May 25. But while Lincoln was here, bad things were afoot in the Shenandoah that would completely disrupt the grand scheme, for on May 23, Jackson’s men struck at Banks’s forces at Strasburg and Front Royal. The climactic phase fo the Valley campaign had begun.

Lincoln’s visit to Chatham and Fredericksburg was akin to President Obama’s recent journey to Afghanistan–very few in the army or the press knew he was coming. Consequently, the visit received little notice in the press, and indeed is scantily recorded by men in the army either. Still, there are some worthwhile nuggets and impressions that have come down to us.

Union General John Gibbon left the best description of Lincoln’s morning visit to Chatham in a letter to his wife (Gibbon had written an artillery manual before the war that the government had refused to adopt, something the general pointed out to the president):

END_OF_DOCUMENT_TOKEN_TO_BE_REPLACED

By this date 150 years ago, the canal boat bridge at Fredericksburg was in full operation.  On May 23, 1862, President Abraham Lincoln would cross it during his tour of Fredericksburg.  We wrote extensively about the bridge a couple years ago, and you can find our posts here and here.

From John Hennessy (the links herein are generally to posts we have done about whatever topic is in hypertext.  Explore):

One hundred and fifty years ago, Fredericksburg was in the midst of a painful, annoying (at least to white residents) tumult, as the Union army took firm possession of the town.  The army spent the three weeks between the Battle of Arby’s and May 9 restoring the railroad line between Aquia Landing and Fredericksburg and preparing for McDowell’s advance south on Richmond.  The biggest task was the reconstruction of the massive Potomac Creek Bridge, which like everything else had been destroyed by the retreating Confederates.

The ruins of the bridge over Potomac Creek. The bridge would be reconstructed by May 15. Lincoln would christen it the “beanpole and cornstalks” bridge. For photos of the site today, click here.

Elsewhere, the army was busy building bridges into town, establishing camps on Stafford Heights (and farther back from the river), and cautiously feeling for hovering Confederates west and south of Fredericksburg. The first of the bridges to be completed was the canal boat bridge spanning Ferry Farm to the town docks in Fredericksburg.  On May 5, Union engineers completed a more traditional pontoon bridge from the Stafford shore to the base of Hawke Street–just above Chatham.  The army would reuse this site in December 1862, labeling it the Upper Crossing.

The pontoon bridge into Fredericksburg, May 1862.

By mid-May, as many as 400 soldiers had been assigned to help re-build the burned bridge of the Richmond, Fredericksburg, and Potomac Railroad into Fredericksburg–75 feet high and 600 feet long. END_OF_DOCUMENT_TOKEN_TO_BE_REPLACED

Park staff has recently been engaged in looking at Fredericksburg area’s Unionist families and the role they played in the Civil War hereabouts. Staff Historian Don Pfanz recently authored an article on this subject in the locally published Fredericksburg History & Biography (Volume 10). A two-part post on this blog last year, which can be found here, looked at the activity of perhaps the most active Unionist in Spotsylvania County, Isaac Silver. Today’s post seeks to introduce our readers to another of the local Unionist community who made hard choices about his involvement in the war, resisted Confederate authority and ultimately survived within a hostile environment.

Abraham Primmer moved his family to Stafford County, Virginia in 1853, purchasing a 360-acre estate, known as “Bell-Air.” The property sat along the Richmond, Fredericksburg & Potomac Railroad about 1.5 miles northeast of Falmouth. Abraham hailed from New York and spent his early adult life in Chemung County, serving as a Supervisor and Justice of the Peace for the town of Catlin, as well as an assemblyman for Chemung. The family included Abraham and his wife Elizabeth, along with their four daughters and three sons.

An 1867 map showing Abraham Primmer’s “Bell-Air” in relation to other landmark residences in southern Stafford County.

On the subject of secession, the Primmers stood solidly behind the Union. Abraham later claimed that he “never drew a disloyal breath from beginning to end.” On May 23, 1861, Virginians gathered at polling places throughout the state to cast their vote on whether or not to adopt the Ordinance of Secession. Abraham remembered that at his polling location, militiamen were on hand, intent on making sure the ordinance received overwhelming support.

“Every influence was employed to intimidate—–any who were suspected of the crime of being a union man. Up to this time I had determined to vote against secession and had spoken against it on several occasions, and was a marked man; where the vote was taken I was warned of my danger. I had two sons that I wanted to save if the state seceded and to save myself and family from the fury of these outlaws and the persecutions of the inflamed secesh.” – Testimony of Abraham Primmer, Southern Claims Commission

END_OF_DOCUMENT_TOKEN_TO_BE_REPLACED

[First, a prelude:  In light of the topic of this post, a couple of reminders about this weekend’s To Freedom event.  Join us on Saturday night at 6:30 for “Bearing the Stones,” a community procession down 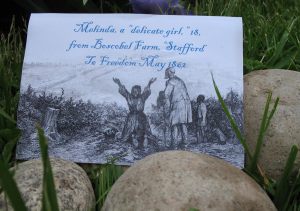 Sophia Street from Shiloh Baptist Church (Old Site) to the middle crossing site below city dock, where hundreds, perhaps thousands of slaves crossed in 1862. Then, at 7:30, we will present “10,000 Lights to Freedom,” an interpretive program of music, the words of those who were there, readings, and of course, the illumination of 10,000 lights on the Stafford shore.  For more information on the weekend, click here.

Also, on Sunday at 1:30, I will be tracing a tour along the Trail to Freedom, from the Rappahannock to Aquia Landing–including the site of John Washington’s crossing, described below. This program is being sponsored by Eastern National. There is a fee ($20, to help with the bus), and the tour will last three hours.  You can reserve a seat by calling 540 654-5543.

On Saturday on the hour from 11 till 3, we will be doing walking tours, “A Slave’s World and Beyond,” which includes many sites associated with John Washington.  Meet at Market Square.  These are free, presented by myself, Steward Henderson, and Donald Pfanz of the park staff.]

Chances are, if you have spent much time here or on Fredericksburg Remembered, you have heard a bit about John Washington (see here). Washington was a slave who spent most of his life in bondage in Fredericksburg, and seven years after the war wrote a truly compelling memoir of his experience.  His is an important voice–one of two complete memoirs from a Fredericksburg slave, and by far the best.

Of all the moments narrated in Washington’s remembrance, by far the most vivid–for him and for us his readers–is his passage across the Rappahannock to freedom in April 1862. Washington crossed just hours after the arrival of the Union army at Falmouth; indeed, he may have been the first to do so, the first of more than 10,000 to follow. Because his is one of just two accounts from a slave’s hand that narrates this passage (see the other here), his assumes immense historical significance. He conveys to us what must have been the sentiments of thousands of others.

Washington began his day that Good Friday tending bar at the Shakespeare House hotel on Caroline Street, where today’s Soup and Taco stands (with the best tortilla soup in town).  With the arrival of the Union army (we wrote of Washington’s perception of that here), and while white residents rushed to flee or hide, Washington took to the streets.

He stopped first at his owner’s residence in the Farmer’s Bank building on Princess Anne Street.  Washington is the classic example of a slave who humored those in authority, always taking care that they thought him willing and compliant. In his final act as a slave, he did so again. When he walked in the front door of the bank, his owner, Catherine Taliaffero, was busy packing to head to the country.   “Child,” she said to this 24-year-old man, “you better come and go out in the country With me So as to keep away from the yankees.” Washington replied, “Yes madam,” but asserted that he needed to return the keys to the hotel to the hotelier’s wife. “I will come right back directly,” he said, and then walked out the door never to return as a slave.

From the National Bank building Washington proceeded to the river, likely up to what we know today as the upper crossing site, at the base of Hawke Street.   END_OF_DOCUMENT_TOKEN_TO_BE_REPLACED