The officer stood over the freshly exhumed grave with a pencil and ledger in his hands. He told others to search the remains as he struggled to decipher the crude etching on a weathered piece of wood. The lettering was faded and worn, but seemed to read, “W.A.W.” A worker called the officer’s attention to a hat badge that indicated the deceased was from New Hampshire. The other workers shook their heads to signify there was no additional identifiable information to be found. The officer then recorded in the ledger book, “Grave # 1221, W.A.W., NH, removed from O’Bannon’s Farm.” A pile of bones and decayed clothing was then placed into a rough wooden coffin for transport to the newly established Fredericksburg National Cemetery. 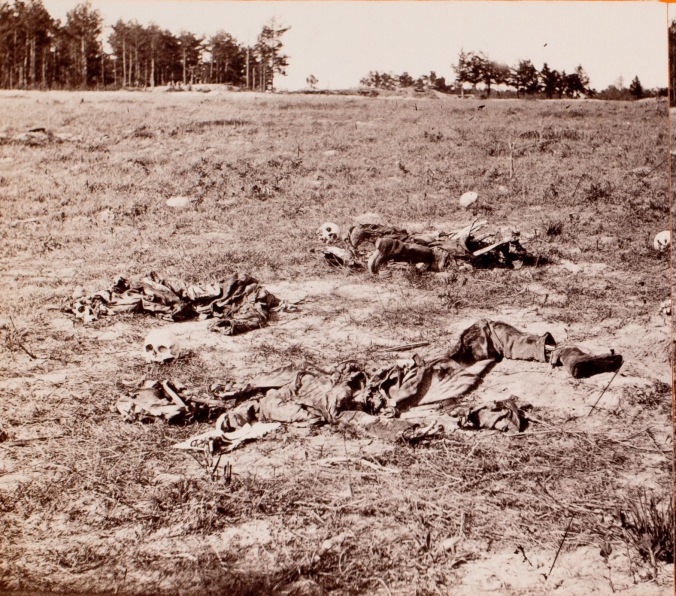 The aforementioned scene was repeated over 15,000 times in Fredericksburg and Stafford and Spotsylvania counties from 1866 to 1868. During this period, United States Army reburial details scoured the region cataloging and reinterring the remains of Union soldiers. Sadly, over 12,000 of the graves were simply marked, “Unknown.” It was the result of no standard issue identification for the soldiers, no protocol for properly identifying or marking graves, and the sheer magnitude of casualties incurred on a landscape that witnessed four of the costliest battles of the Civil War.

Union graves on the Carpenter Farm, 1866. Note the identification on the board nearest the camera–Richard Ross, today buried in the National Cemetery.

However, in some instances, surviving soldiers took it upon themselves to identify and mark the graves of their comrades. This would likely be a difficult process in the aftermath of battle. Locating remains among the detritus of war surely complicated things, not to mention the armies were still in the midst of active campaigns. If a deceased soldier’s body was actually found, the next challenge was how to effectively mark the gravesite. Usually it was a shallow, hastily dug grave, and the marker would consist of writing or etching on various materials such as wood, metal, or even pieces of leather equipment. Not knowing who (if anyone), would ever tend to these graves, the soldiers did the best they could considering the circumstances.

Depending on when the death occurred, these graves, and their improvised markers, could remain untended for several years. During that time, the elements, animals, or unsympathetic locals could damage, remove, or destroy makeshift markers. Thus, the noble efforts of the living were for naught, as any indication of the grave’s occupant was compromised or simply disappeared. END_OF_DOCUMENT_TOKEN_TO_BE_REPLACED