Last weekend I had the great pleasure to be invited to explore some great sites along the Rapidan in both Culpeper and Orange Counties. Brett Johnson, who lives near Rapidan, and Walker Somerville, scion of the family that has owned land at Somerville Ford for three centuries, were the hosts. My thanks to them for a memorable day–they know the ground as only locals can, and many of the specifics included here were conveyed by them.

Union pickets at Somerville Ford on September 14, 1863. Note the Confederate lunettes on the distant heights.  The two barns on the right of this image also appear in the sketch shared below.

The purpose of this post is simply to provide a visual record of what we saw, without too much elaboration. If you have questions, feel free to ask in the comments.  If I don’t know the answer, I’ll find someone who does.

Bear in mind that every site mentioned in this post is private property and generally not accessible to the public.

We started at Somerville Ford on the Rapidan River. Here, on August 20, 1862, the entirety of Jackson’s wing of Lee’s Army crossed to commence the Second Manassas campaign.  Samuel Buck of the 13th VA crossed here that day: 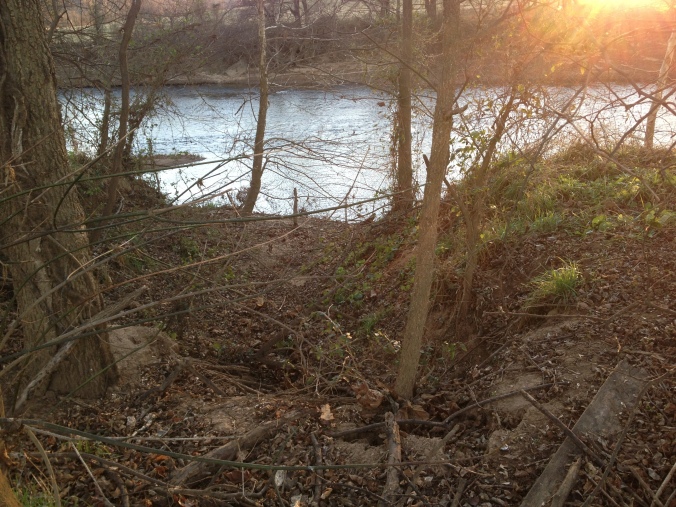 This washed-out cut is on the site of Somerville Ford on the Orange side, and may well be the remnant of the road to the ford used by Jackson’s men.

The water was pretty deep but very pleasant to our warm bodies. As soon as we could get our trousers off we waded in, yelling like a lot of school boys. It is an interesting sight to see so many men crossing a river and most amusing to hear their witty remarks.  Men under such circumstances are only grown children.

The old road leading up from the ford on the Culpeper side. The left bank of the road cut is clearly visible.

On September 14, 1863, Union and Confederate artillery engaged in fairly robust counter-battery fire here.  Charles Furlow of the 4th Georgia (his diary is at Yale University) left a fair description. [More images beyond the jump.]

When we arrived within half a mile of the river our Brigade was halted and ordered to stack arms and clear the road so that the Artillery could pass, then rode down to the river to see what was going on.  In front of us I could see nothing but a few Cavalry skirmishers who were firing new and then at our pickets.  A mile or two below, at Raccoon Ford, Genl Stewart was fighting them and using some Artillery.  About 2 o’clock our Division Battalion of artillery came up and passed to the front.  As soon as the enemy saw it they ran out some peices [sic] and soon a brisk duel was going on which lasted some time.  Our Artillery lost six killed and eighteen wounded.

Here is another view of Union troops at Somerville Ford, in an unfinished bucolic sketch by Waud.  Again, note the barns, which are also shown in the sketch above.

An unfinished sketch by Alfred Waud.

The road from Somerville Ford, Culpeper side. Jackson passed here on August 20, heading away from the camera.

Here is a manuscript map from an intelligence report delivered to Union colonel George Sharpe in September 1863, showing the position of Confederate batteries at Somerville (the original is in RG 393 at NARA and was found by Greg Mertz in 1985).  The right-most Confederate works shown on the map can still be seen in a pasture alongside Route 522.

In the weeks following, the armies glared at each other up and down the Rapidan.  Furlow recorded a bit of humorous competition between Union and Confederate pickets at Somerville Ford.

Sept 15.  Remained at the camp of the day before.  Considerable fun going on, on the picket line over a turkey.  The yankees shot a turkey and attempted to get it, but our sharpshooters drove them off.  Our men attempted to get it then but were driven off in turn by the yankees.  Thus it went on for half the day, but the yankees, I think finally got it.  This made our men mad so they went over and captured the yankee skirmishers to pay for it.

Somerville Ford. The missing wartime road is indicated in red.

Today the ford site is largely intact, about a mile upstream from where Route 522 crosses the Rapidan. An impressive wartime road trace leads up from the ford on the Culpeper side, eventually merging into a modern farm lane that crosses “Somvervillia,” the historic Somerville farm (the wartime big house burned during the war and the present house was finished in 1870). On the Orange side, Route 636 breaks off 622 and leads directly to the ford. A highway bridge crossed the river here until the floods of 1942, and the abutments from the bridge still stand.  The ford was about 200 yards downstream from the bridge. A washed-out gully may be the remnants of the wartime road leading directly into the river.

The site of the bridge has become something of an ugly dumping ground. On the Orange side of the river, you can get fairly close to the site of the ford while still on the old VDOT right of way. The ford is completely inaccessible to the public on the Culpeper side. 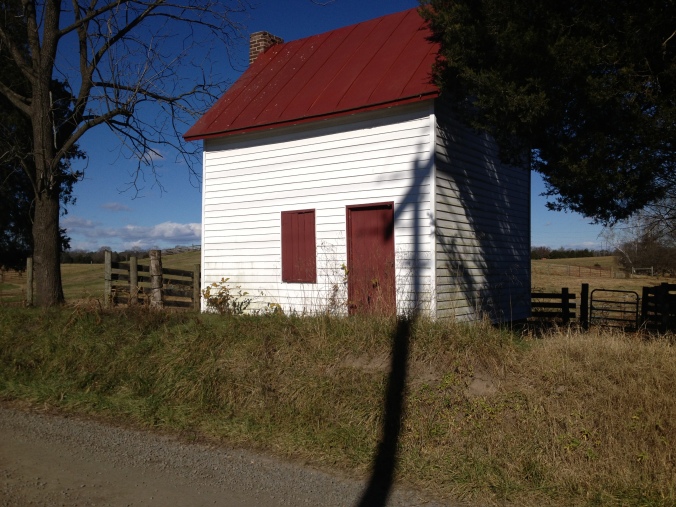 A slave cabin on the Somerville farm, alongside the road leading from the ford.

Our journeys this day took us also to Morton’s Ford and several sites in between. We’ll offer up some photos of those in coming posts. Some curious stuff.

For the moment, though, here’s an image of Raccoon Ford, where Longstreet’s wing of Lee’s army crossed on August 20, 1862.  Theodore Fogle of the 2d Georgia, whose excellent letters are at Emory University, left this raucous description of the crossing here.

An army fording a river is a sight worth seeing. Some of the men just walked in with shoes & all on, but most of them were guiltless of any clothing below the waist.  I was “sanscoullotte,” sans everything except my jacket, my shirt was tucked up under it and the jacket buttoned up to my throat, in I went, wouldn’t you have been amused to see me. We all crossed safely, one fellow fell down & then current carried away everything but his shirt.  Wasn’t he in a nice predicament.

Raccoon Ford, from the Orange County side of the Rapidan. Longstreet and about 25,000 men crossed here on August 20, 1862.  The road ran along what is today the upper edge of the island.

Raccoon Ford is easily seen from the Orange side of the Rapidan, along Raccoon Ford Road, Route 611.  The north bank is privately owned. 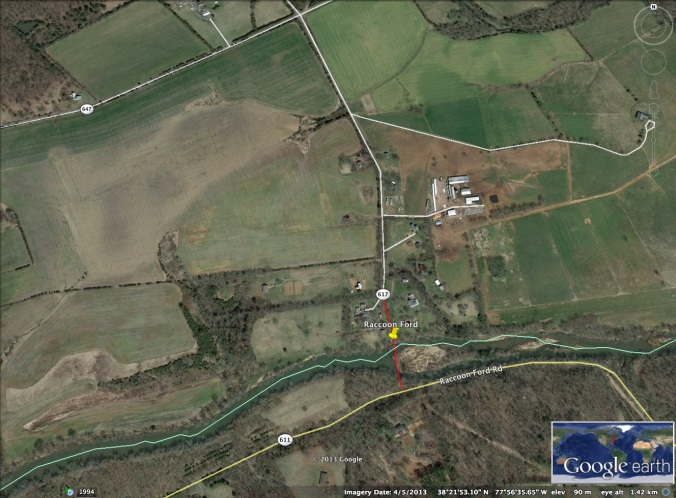 28 thoughts on “Exploring Culpeper and Orange–Somerville and Raccoon Fords”