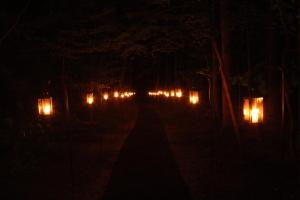 These are the first portion of the remarks I gave at the event marking the 150th anniversary of the wounding of Stonewall Jackson. More than 450 people gathered at the site in the fading light and eventual darkness. My purpose was to talk about the man and our collective historical relationship with  him. Greg Mertz and Frank O’Reilly brought visitors through the events of May 2, culminating with Jackson’s wounding at about 9 p.m.  It was a memorable evening.

It strikes me that one of the differences between our treatment of historical icons and our treatment of merely famous Americans is this: for merely famous people, we are satisfied to understand their deeds. For our icons, we seek a vision of the person, replete with personal details, almost all of them flattering.

From John Hennessy [We offer this up in advance of Friday night’s History at Sunset program in the city and Confederate cemeteries in Fredericksburg. This post originally appeared in the Free Lance-Star in 2010.]

The headstone of Evy and George Doswell, young victims of the 1861 Scarlet Fever epidemic in Fredericksburg.

Few things of such permanence in Fredericksburg came to be so quickly.  On the night of January 3, 1844, as the town of 4,000 or so regained its rhythms after the holidays, a group of nine men gathered in the study of 28-year-old Presbyterian pastor George W. McPhail.  They came together to discuss, as the minutes of their meeting described it, “a Cemetery for the Burial of the Dead.”  The old Corporation Burial Ground on Prince Edward Street was nearly full, and looking tattered to boot.  Now, an old field of corn along the “New Turnpike” (what we know as William Street) was suddenly available.  The nine men of rather common backgrounds, including a shoemaker, editor, jeweler, bookseller, saddler, and merchant, decided that night to purchase the land.  The next day the deed was done:  three acres for $550, bankrolled by bookseller Edward McDowell.  The new town cemetery was born—a place “for the decent interment of the dead.”

Within ten days the committee decided how the lots would be laid out; in six weeks the group petitioned the legislature to incorporate, in two months the site was cleared of its rotting cornstalks; in May grass was sown; and by September 1844 workers completed the brick wall surrounding the cemetery—with the prominent gate on William Street that still stands.

Soon thereafter someone stenciled the name “Fredericksburg Cemetery” on the walls, and the place opened for business and burials.  A thirty-by-eighteen-foot lot cost $30; a lot eighteen feet square $15 (by 1860, the lot prices would nearly double).  The new corporation contracted to have graves dug: two dollars for a “plain grave” and $2.50 “where a box is used.”  )Only white residents qualified for burial here.  Slaves and free people of color were usually buried across William Street in the “Potter’s Field,” where Maury School now stands.)  The corporation reserved the four lots around the center point of the cemetery “for the exclusive use” of the pastors (and their families) of the four major churches in town: St. George’s, Methodist, Baptist, and Presbyterian.  By 1860, more than 160 burials had already tak

By then, remembered a visitor, the cemetery was “regularly laid off…the walks being graveled, and the plats covered with a rich carpet of greenwood and adorned with many a fragrant shrub and flower.”  Each family decorated its plot according to taste or means:  “Some were simply surrounded by a plain white paling and improved and attended within by the assiduous hand of affection. Others were enclosed with costly, elaborate railings and the interior embellished with every thing that wealth could purchase.”  The overall effect, wrote this observer, “was pleasing in the highest degree.”

The cemetery that so swiftly and beautifully found its place on the Fredericksburg landscape still exists; the corporation that engineered its rise continues on as well.  The problem is, few people in town today realize it.  END_OF_DOCUMENT_TOKEN_TO_BE_REPLACED