It is perhaps the most important, impressive piece of architecture in Fredericksburg: the Circuit Courthouse on Princess Anne Street. It was designed in 1852 by James Renwick–the designer of the Smithsonian Building in Washington and St. Patrick’s Cathedral in New York City–for a design fee of $300 and a total cost of nearly $14,000.  For Fredericksburg, it was an uncommon bit of finery. Indeed, local residents rebelled at the cost, submitting a petition with 172 signatures asking for the new courthouse to be scaled back to a $6,000 building.  Town council refused…and today Fredericksburg has one of the finest gothic courthouses in the mid-Atlantic states.

When this rarely used photograph was taken in 1864, the courthouse was a dozen years old.  As Noel Harrison notes in his Fredericksburg Sites book, it had seen hard use already during the war: as a Confederate barracks in 1861; as housing for newly escaped slaves in 1862; as a signal station; and as a hospital after the Battle of Fredericksburg.  When this photo was taken, probably on May 20, 1864, the place was once again being used as a hospital–part of the massive evacuation hospital established by the Union army for wounded from the Wilderness and Spotsylvania.

The courthouse under Union occupation, 1862

To the right of the courthouse is the corner of the Masonic Hall, which was also being used as a hospital at this point.  To the left is St.George’s, and in between is an excellent view of one of Fredericksburg’s main streets, Princess Anne. Note too that the courthouse itself appears to be made of huge sandstone blocks; the stucco that characterizes it today didn’t make its appearance until years later. 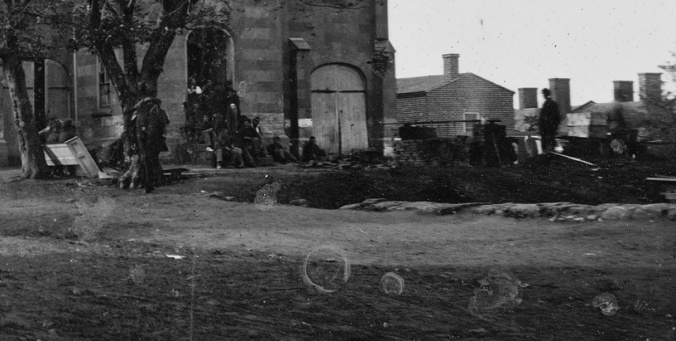 Soldiers on the steps...and what are perhaps caskets at far right.

Under magnification, you can see a group of wounded Union soldiers gathered at the side entrance to the building, while others to the left sit on one of the benches taken out of the courthouse.  To the right of them is what appears to be a pile of pavers or building materials, and at the far right wooden boxes that may well be caskets (though caskets were rare and prized in Fredericksburg in 1864).

In another magnified excerpt, notice that the iron fence in front of the courthouse is covered with blankets hanging to dry–clear evidence of what was going on inside the building at the time.

Finally, I include an aerial view indicating the location and perspective of the 1864 image.

As for conundrums, that relating to the courthouse is not ours, but the community’s. The place is just doesn’t meet the needs of a modern court operation, so the city is actively considering other sites. What the future use of the courthouse building might be is very much open to question.

8 thoughts on “A beleaguered courthouse”