Are those trenches real?

It’s a common question heard by those who work at Civil War battlefields containing well-preserved trenches and earthworks. “Are those trenches real?” In other words, are those actually the trenches built by the soldiers? On the Fredericksburg area battlefields, the answer is: “Well, yes and no.” 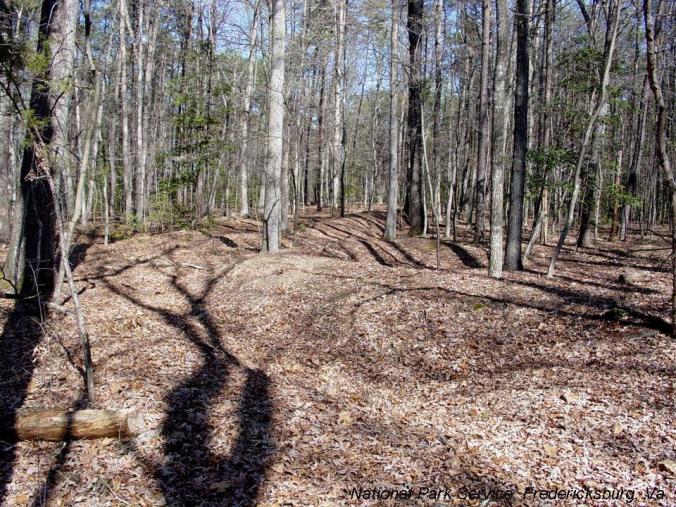 For many folks visiting the battlefields, the trenches appear awfully deep to have survived in that condition for almost 150 years. This has lead to the belief that surely they must have been rebuilt by the Civilian Conservation Corps (CCC) in the 1930s or by the National Park Service (NPS) at some other time. Overall, no, there was no wide-spread rebuilding of the earthworks. There was, however, a reconstruction program, for interpretive purposes, of select small sections of trenches on some of the battlefields.

In 1933, Major General Douglas MacArthur, who oversaw the Army’s involvement in the CCC, penned a memo to CCC Director Robert Fechner, in which he offered his views on the management of trenches on historic battlefields:

“It must be borne in mind that the development of these parks has for its purpose the restoration of the battle fields and preserving historic locations, monuments and sites of battle. Consequently, such work as is done must be performed with this in view, in order that the trench system and other historic points may not be destroyed but retained in their present condition or restored to the condition they were in at the time of the battle.”   – John C. Paige, The Civilian Conservation Corps and the National Park Service, 1933-1942: An Administrative History (1985)

At FRSP, the park management staff wrestled with trench restoration. In a 1935 concept study, Historian T. Sutton Jett drew up a plan for trench reconstructions on the four battlefields. In this document, he addressed concerns about whether such reconstructions were a good idea:

“The reaction of the visitors to the existing trench remains on the battlefields of Fredericksburg, Chancellorsville, the Wilderness, and Spotsylvania Court House revealed a confusion as to the war-time appearance of temporary field fortifications.

Superintendent [Branch] Spalding suggested that sample trench restorations on each field would not only definitely clear this confusion, but would lend to a much more intelligible story of the operations.

The first of several questions of policy to arise was whether the sample restoration should be on an existing trench, or a new trench constructed at some convenient point on the field. To make the restoration on an existing trench would alter the appearance of the historic remains, but to construct an entirely new work would add trenches to the battlefield which did not exist at the time of the battles. Such an additional trench might easily confuse people making an independent study of the battle. This possibility became keenly evident when members of our own staff found that the existing length of the trench selected [at Spotsylvania Court House Battlefield] as a desirable one to extend threw definite light on the operations of May 10 and 12, 1864. It was therefore definitely decided not to construct additional trenches.”  – T. Sutton Jett, “The 1935 Trench Restoration,” copy in FRSP CRM office

Jett’s statement suggests that park officials agreed not to build additional trenches, but to “restore,” or more accurately reconstruct, existing sections of trench.

“Fredericksburg Battlefield – The restoration of one of the gun pits on Walker’s Artillery position near Hamilton’s Crossing, and of another gun pit on Lee’s Hill.

Chancellorsville Battlefield – The restoration of a one-hundred-foot stretch of the line occupied by the XII and III Federal Corps on the morning of May 3. The program also calls for the restoration of a gun position at Fairview.

Wilderness Battlefield – The restoration of an infantry work on Ewell’s line near the Contact Station on the Orange Turnpike, and of a hastily constructed log barricade on the Hancock line near the Plank-Brock Road intersection.  – T. Sutton Jett, “The 1935 Trench Restoration”

At the time that Jett’s memo was written, the NPS had already completed two trench reconstructions at Spotsylvania Court House. A 100-foot section of trench a few yards to the rear of the Bloody Angle, as well as an elaborate section of trench on the east face of the “Muleshoe” salient. The same procedure for reconstruction was followed at both locations, as Jett here explained for that stretch of trench behind the Bloody Angle:

“The depth of the original work was determined by digging cross trenches through the earthwork remains. The difference on the texture of soil clearly showed this depth to be 2 ft. 3 in. The entire one-hundred-foot stretch was then excavated to that depth. At the same time this operation was under way, another portion of the squad was removing the earth of the parapet, starting where the trench ditch begins and taking off two feet. The vertical logs were then placed at approximately seven-foot intervals. The horizontal logs (eight to ten feet long) when in place, gave the necessary height. The head log was set by placing block wedges under the top log.

The dirt used for the parapet was hauled to the restoration to afford the desired clay color since the soil which the soldiers digging the original trench threw there, was, of course, yellow sub-soil.” – T. Sutton Jett, “The 1935 Trench Restoration”

The plan also included a field of abatis in front of the works, which was accomplished by cutting down the nearby trees and leaving them to form an entanglement of limbs. More substantial branches were sharpened and placed forward, to impart more of an obstacle and barricade. Jett noted that “the entire work was reconstructed as nearly as possible following war-time procedures.” 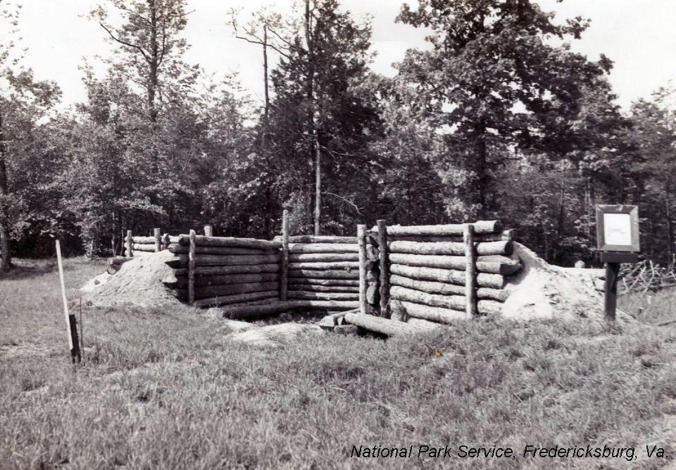 Reconstructed trench on east face of the “Muleshoe” salient.

These very elaborate reconstructions at Spotsylvania Court House were completed and photographic documentation shows a quite effective interpretive landscape tool. These reconstructions were considered a success and often appeared in advertising literature for the battlefields. As suggested by Jett’s memo, an expansion of reconstructed trenches to the other battlefields was planned. 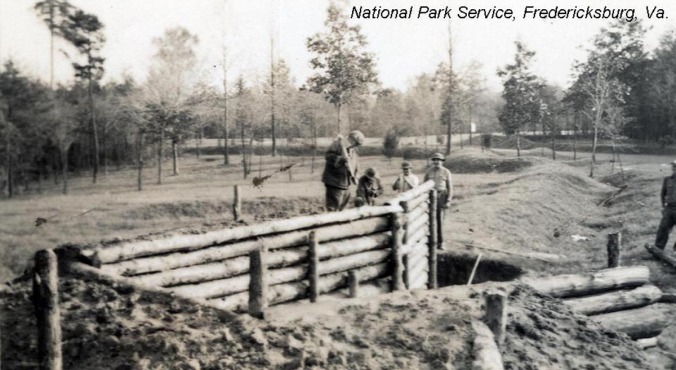 Reconstructed trench on east face of the “Muleshoe” salient – October 1935. Note the integration of the reconstruction into the remnant of the original line of earthworks.

Part 2 of this discussion can be found here.

5 thoughts on “Are those trenches real?”