[A preface: Brompton, the subject of what follows, is the home of the president of the University of Mary Washington, and is not open to the public.  But, as you likely know, we are holding our first 150th event on November 20th at the Baptist Church, “Years of Anguish: The Coming Storm,” which will look at how the nation, state, and community tumbled toward secession, featuring George Rable and Bill Freehling. You can register here (the program is free). As prelude to that event, from 10:30 till noon that morning, we will be hosting a walk-around of the grounds at Brompton, the home of Fredericksburg’s delegate to the secession convention, John Marye. If you want to see for yourself some of what is in these images, we heartily invite you. Enter through the pedestrian entrance off Hanover Street. For the walk, there is no pre-registration required.]

In our last (click here), we explored the background of a couple of A.J. Russell images, getting a new look at the Bloody Plain in front of the Sunken Road. The second of those images, above, also offers an unparalelled look along the top of Marye’s Heights, specifically at Brompton and the outbuildings that surround it.

Brompton is a place of visual and historical prominence, and yet much of its story remains obscure. Its wartime owner, John L. Marye (rhymes with Marie), acquired newly built Brompton about 1823 and would, on the eve of Civil War, represent Fredericksburgers and Spotsylvanians at the 1861 secession convention in Richmond. He was a man of calm manner and centrist politics, disinclined toward confrontation–either individually or on behalf of the constituents he represented.  He was, by his own admission, a “slow coach” when it came to secession.  Yet beyond this and a few scattered details, we know little of Marye and his life before the war (though we know a great deal about his son, John Jr., who was lieutenant governor of Virginia in the 1870s and a prominent local attorney–the two men are routinely confused with each other). We don’t even have a picture of him. We do know this: his majestic home projected power and wealth, a stark contrast to his neighbors just yards away on the Sunken Road (a heterogeneous lot of families you can read about here).

He is, though, synonymous with the Battle of Fredericksburg, for it was John L. Marye Sr. who gave his name to Marye’s Heights, the commanding Confederate ground that dominated the plain below. This image offers by far the best sense of how dominant Brompton was, and it offers a terrific view of the landscape beyond the big house.

To the left of the big house, most apparent is a white building with narrow pillars supporting an overhanging roof–it is either a shed or, more likely, an office.  Here is the same building photographed a year later, in May 1864, medical officers lounging about while Brompton was being used as a Union hospital. 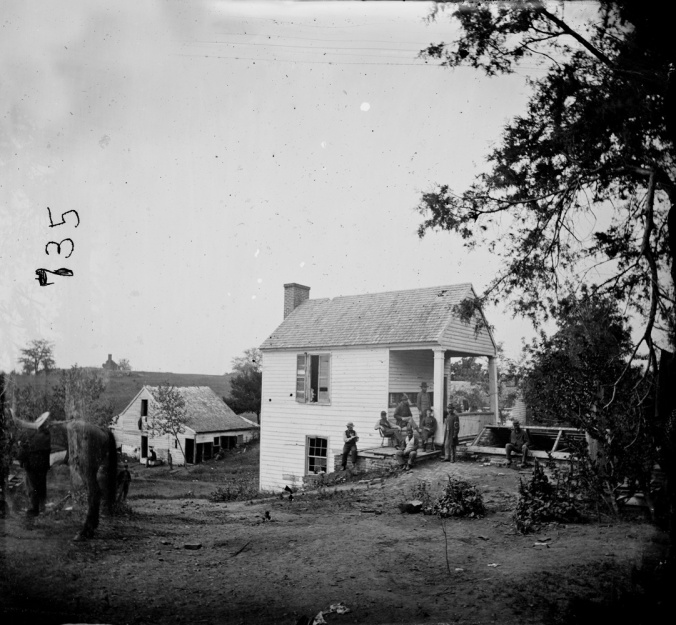 This building survives today, and indeed still bears many bullet holes, likely from the Second Battle of Fredericksburg.

Curiously, you’ll note that the building’s door has been moved since the war–from the right side of the gable end to the left.

This building has more visible exterior battle damage than any building in the Fredericksburg area (so far as I know). Note especially the hole from an artillery shell beneath the left-hand window and the many bullet holes in the gable end.  Again, most of these damage likely occurred at Second Fredericksburg. 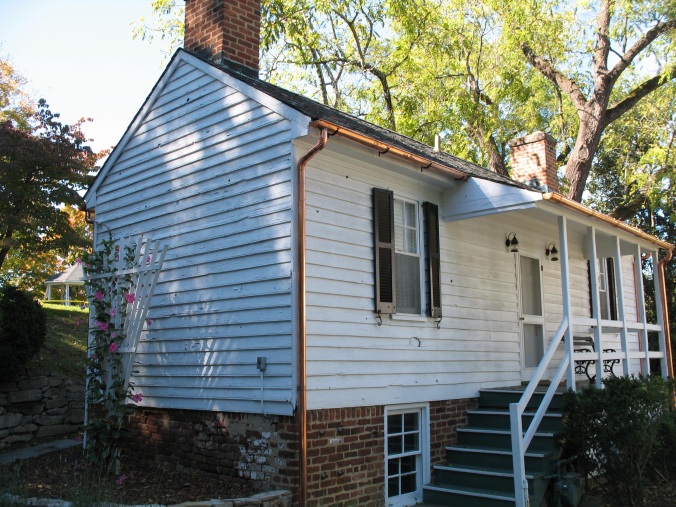 Finally, look at this 1864 view of Brompton

First, note that the frame addition to the left still stands (it is obscured by trees in the panorama). 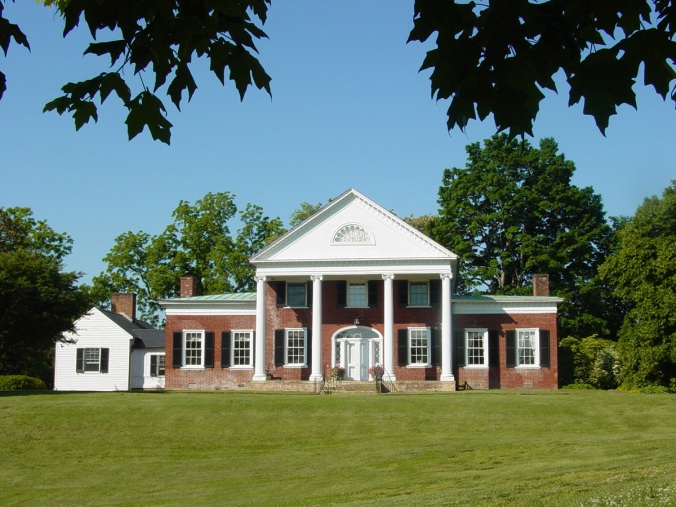 But more interestingly, look at the intense battle damage visible in the historic photo. The south wall of Brompton is covered with the mark of bullets–the lead oxidized by a year of exposure. Today, the white oxidized mark of the lead is gone, but much evidence of battle damage remains in the bricks of the main house.

Finally, referring back to the panorama, note the huge, well-formed tree to the right of the main house. 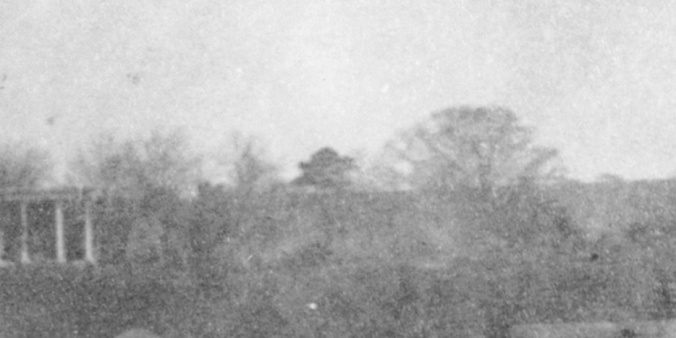 That’s the Brompton Oak, scene of some of the most famous images of the war, taken in 1864, and made famous in Bill Frassanito’s work. 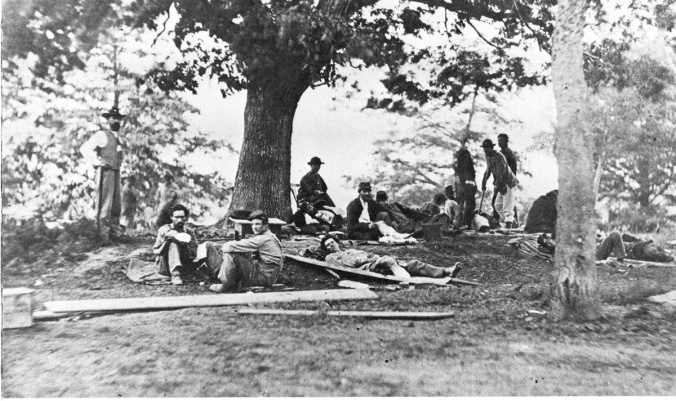 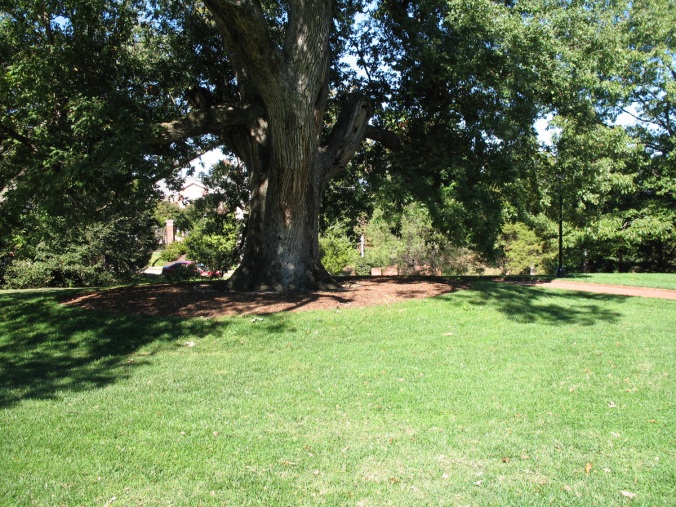 Since the 1940s, the University of Mary Washington has owned Brompton. While it is within the authorized boundary of the park, it’s hard to imagine that any president of the University would opt to live elsewhere (don’t blame them for that a bit). In the meantime, Brompton’s place in the historic landscape of Fredericksburg seems secure. It is stunningly beautiful–proof that the best thing for a house is to be lived in. And we’re grateful to UMW President Rick Hurley and his staff for making its grounds available to the public on November 20.  We hope you’ll join us and see the place for yourself.

One thought on “Brompton in the background: rare view of the Bloody Plain, Part 2”