From John Hennessy:  Note:  since we did this post, John Cummings has done some additional analysis of these photographs. Check out his excellent work here. 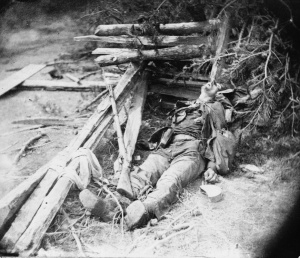 They are perhaps the most compelling photographs taken in the Fredericksburg region during the war–the images of Confederate dead at Widow Alsop’s farm on May 20, 1864, after the Battle of Harris Farm. They are perhaps the visual portrayal that most shapes our perception of the battlefields in human terms.  They were first looked at by William Frassanito in his book Grant and Lee, in 1983. Today, high-resolution scans of the images are available, but truth be told, not much new can be derived from the images that was not spotted by Frassanito in his look at the original plates nearly three decades ago. The landscape of the site then and now was largely non-descript, and while we might be able to guess at the precise location and angle of some of the views, we would be doing no more than guessing.

Still, there are a few things worth noting, and curiosity compels us to avail ourselves of the digital scans now available to take a closer look.  Since Frassanito’s work, Noel Harrison has done extensive work on civilian sites in the region, and we now have a better understanding of the nature and location of Widow Alsop’s farm. (Noel’s work is the foundation for almost everything we know about the civilian landsape on the four battlefields here.) 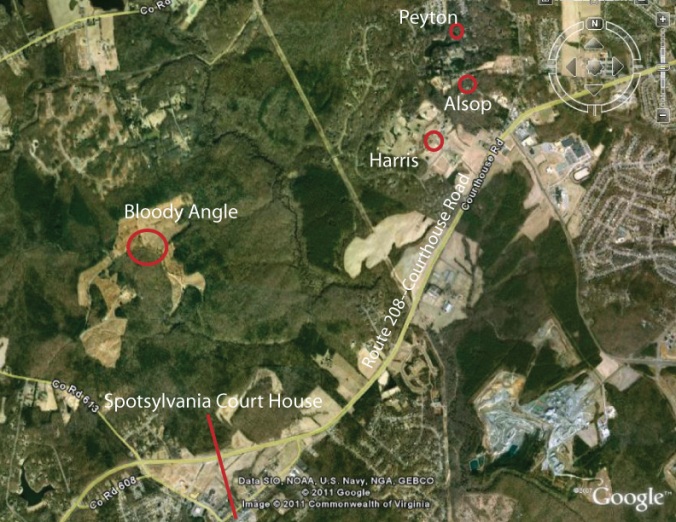 The Alsop farm as it relates to the Bloody Angle.

The term Widow Alsop conjures an aged image, but in fact, Susan Alsop was just 24 or 25 years old when battle visited her farm. Her husband James A. Alsop, died in December 1860, and Susan carried on without him. No genealogy in our region is more complex than that of the Alsop family (pronounced awl-sup), for no family was more numerous. There were no fewer than sixteen Spotsylvania households that included an Alsop in 1860. Fortunately, few families have had more work done on them than the Alsops. The family geneaology, Alsop’s Tables, published by Jerry David Alsup in 1986 is a gold mine. Family lore holds that young Susan Alsop, along with her ten slaves and a white farmhand, got along in “a very successful manner” after her husband’s death.

Susan was next-door-neighbor to Clement Harris, whose farm would lend its name to the 1864 battle. Overlaying Nathaniel Michler’s 1867 map of Spotsylvania Battlefield allows us to locate the farm fairly well: it sat well off the main road, almost exactly one-third of a mile north-northeast of Harris’s Farm. Michler’s map shows a main house with three outbuildings extending southward on the farm lane leading to the Harris Place–though we cannot be sure that the buildings shown on Michler’s map were present in 1864, we presume they probably were. Today the Alsop farm site is in a lightly used area west of Route 208 and Smith Station Road. We cannot say with certainty that the site has been consumed by modern buildings–the overlay suggests that it has. But perhaps archeological remnants of the house or outbuildings survive.

Note that at "the gate," modern 208 diverts from its historic route. Historic roads are marked in red.

The same map, but with Michler overlaid upon it.

We will leave it to you to explore Frassanito’s work in its original form, and here we will simply share some of the images.  The only one that can fairly be placed within the context fo the site is this one.

We cannot know with certainty whether this is the front or back of the house–the presence of a porch suggests the front, but even if so, we cannot know which way the house fronted at the time.  If we take Michler’s map as accurate, then this image would be of the south facade of the house, with one of the outbuildings visible at the right, placing the camera southwest of the house. That would mean, though, that the gable end of the house faced the main Road–Smith Station Road.  That would be an uncommon arrangement in 1864.

Beyond this image, we cannot be certain of the precise location of any of other five images taken on the farm that day.  Still, they constitute a vivid look at the aftermath of battle, and a close look at them cannot help but humanize the event.  Soldiers of the 1st Massachusetts Heavy Artillery, engaged in their first battle at Harris Farm, likely were responsible for causing of the deaths portrayed in these images. They also had to bury them.  Here members of the regiment are pictured actively working on a grave (hence the blurry details).

Photographer Timothy O’Sullivan focused much of his attention on two bodies lying near a fenceline. Of all the images taken that day, these beg the least analysis.

The soldier in the distance, from another angle.

And perhaps the most famous of all the images made at the Alsop farm that day.

As O’Sullivan shows, the dead were gathered for more efficient burial.

Frassanito suggests that the distant body shown in the image of the two soldiers near the fence appears too in this line of bodies awaiting burial.

And finally, a face…probably a North Carolinian…one that the day before had struggled through a long march, likely chatted with fellow soldiers, laughed, and ultimately been full of fear, his eyes still seeming to see.

Update:  Since our post on the Confederate dead at Widow Alsop’s farm–and the revelation that the widow was just 23 years old in 1864–I came across her obituary from the Daily Star, December 6, 1915. She never remarried and never moved–living out her remaining half-century on or near the farm where the pictures were taken.

Mrs. Susan A. Alsop, widow of the late J.A. Alsop, of Spotsylvania Co., Va., passed away peacefully at he residence of Mr. S.R. Alrich…July 31, 1915, in the 76th year of her age, after a long and painful illness, which she bore with Christian fortitude. Mrs. Alsop was married in early womanhood. The happy union was soon broken, Mr. Alsop having passed away two years after the marriage, leaving his young widow with one child, for whom she tenderly cared, and in whose companionship she found great joy and comfort. But death soon tore him from her embrace, leaving her to mourn her sad loss.

Mrs. Alsop was a member of the Massaponax Baptist church from early childhood and continued faithful to the end of her life. To the Sunday School of her church she left an amount adequate to establish a library.

Mrs. Alsop was tenderly loved by all who had the pleasure of knowing her. She was a true friend, a kind neighbor and a lovely Christian character. Her genial disposition greatly endeared her to those with whom she came in contact.

Her funeral took place from Massaponax Baptist Church Tuesday, August 3, 1915, at 10 o’clock a.m. attended by a large company of friends and relatives and the body was tenderly laid to rest in the old family burial ground.